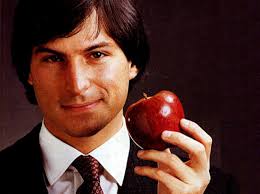 From time to time I give presentations to various audiences:  Silicon Valley the Way I Saw It.  I always enjoy doing that.  One particular section always makes me stop and think.  “Who was this guy? How did he do what he did? Why didn’t I do that?  “What made him so special?” It’s the Steve Jobs section. I met twice with Steve Jobs when I was working at AMD.  He was a fascinating human being. But, the stories about my meetings with him pale compared to the stories about Steve himself.  So – let’s spend some time going through a little bit of Apple / Steve Jobs history. Apple was formed in 1976 by Steve Jobs and Steve Wozniak.  They both went to high school a couple of miles from where I live, but we didn’t cross paths until much later in life. Their first real product, the Apple 2, did very well — particularly in the educational market.  They went public in 1980. Jobs made two hundred million dollars at the IPO. They kept growing and by 1984 their annual sales were approaching one billion dollars. What a success story!!

In 1983 the Apple board decided that they wanted an experienced CEO.  The view was that selling computers should not be a high tech sell — it should be a consumer sell    — more like selling refrigerators than selling mainframe computers. They wanted someone with those skills.  They also wanted someone more mature than Steve who was still under 30, had no previous experience at managing anything or anybody before Apple,  and was known to be a difficult person to work with. After an extensive search, they found John Scully, the VP of marketing at Pepsi Cola Company. Jobs loved Scully.  Scully loved Jobs. Apple really wanted Scully to join them. At first he was hesitant, but eventually Jobs convinced him to take the job using the famous line, “Do you want a chance to change the world, or do you want to spend the rest of your life selling sugared water to kids?”

In 1983, of course, DOS based personal computers (IBM PCs and their clones) were a lot closer to mainframe computers than they were to refrigerators.  In order to use them, you had to talk to the computer using DOS. You had to memorize a cumbersome set of instructions that were part and parcel of DOS.  A few examples of talking to a DOS machine:

What the heck did those mean?  Who would want to learn that language?  And, of course, the syntax demands were exacting.  Any misspelling, extra space or incorrect punctuation would confuse the system.  Jobs had an answer for this. The mouse. The point and click, drag and drop interface that he had seen at Xerox PARC.  That interface was the critical feature of the soon to be announced MAC. Jobs didn’t invent point and click, but he recognized its beauty.  At his funeral in 2011 his wife Laurene said, “Steve had the ability to see what wasn’t there and what was possible.” The mouse was a perfect example of that.  She also reminded the room of something that Steve had told her. “If a customer is too stupid to use an Apple product, then it’s not the customer that’s stupid. It’s Apple that’s stupid!”.  Again — the mouse was a perfect example of how Steve thought.

Scully came aboard, of course, and at first he and Jobs worked together well.  They announced the first MAC in January of 1984 during the Super Bowl. (The 49ers beat the Miami Dolphins 38 – 16.  The game was at Stanford Stadium. I was there!!). The MAC used a mouse. The mouse made the MAC much, much easier for the layman to use than an IBM or IBM clone. The TV commercial that ran during the Super Bowl, which featured a lady javelin thrower in the days of George Orwell’s “Big Brother”, won any number of awards. Even today it’s viewed by many as the best commercial ever made.  The relationship between Jobs and Sculley was great! But then it started to fall apart. Soon it got to the point where the board had to choose between Jobs and Sculley. They chose Sculley. Jobs wasn’t fired, but he was demoted to a position he wasn’t willing to accept. He left shortly afterward in 1985.

When he resigned, he told the Apple board not only that he was leaving, but also,    “I’m taking five people with me” The big problem with that? He hadn’t told the five people he was going to do that.  They hadn’t yet agreed to join him. One of the five was Rich Page. Rich was one of four Apple fellows (“fellow” is the highest rank that an engineer can attain.  Steve Wozniak was also an Apple fellow.). Rich is still active in the Valley today doing angel investing and board work. He (Rich) told me that the five were absolutely shocked when they found out what Steve had done.  But — Steve really had the power of persuasion! Eventually all five signed up and left with Steve to form NeXT Computer. Steve had a concept in his mind that would lead to what he thought would be the perfect computer for schools.  The right feature set, the right price point, the right introduction date. It was going to be perfect!!

“The ability to see what wasn’t there and what was possible.”  —– At NeXT he saw “what wasn’t there”, but he missed on the “what was possible” part.  He envisioned a great feature set, a great looking package, and a great GUI …… But those didn’t mesh at all with the great schedule and the great cost point that he had in mind.  Steve once said that creativity came from saying no 1000 times. He did that at NeXT, but it didn’t pay off. The machine came out late and with an unacceptably high price. Nobody wanted it.

Next week:  My meetings with Jobs