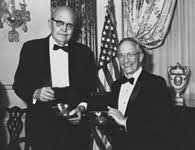 Noyce and the rest of the traitorous eight left Shockley without a clue as to what they would do next.  They believed in semiconductors and knew that they were the very best semiconductor guys in the world.  Their hope was to find a company who would hire them en masse.  After some false starts, Noyce was introduced to Sherman Fairchild. Fairchild was a scientist / engineer who had turned entrepreneur.  Among the many companies he had started was Fairchild Camera.  The company was very successful:  during World War II more than 90% of the military reconnaissance cameras bought by the American forces were made by Fairchild Camera.  Sherman Fairchild saw the potential of semiconductors.  He and Noyce put together a deal.  In 1957 Fairchild opened a new business segment:  Fairchild Semiconductor.  It was located in Palo Alto, populated initially only by the traitorous eight, and its president was Bob Noyce.  Bob worked for a man named John Carter, Fairchild’s CEO, who was based in the corporate headquarters in Long Island, New York.  Then— the event that changed the world.  In 1959, Noyce invented the integrated circuit.  At just about the same time, Jack Kilby, a Texas Instruments engineer also invented the integrated circuit.  This led to some interesting times.

I knew both Bob and Jack.  They were probably the two nicest men I have ever met.  Over the years, they were quite complementary about each other.  Jack Kilby was as kind and gentle a man as you will ever meet.  That was a good thing because he was huge.  I’d guess six feet eight or six nine with a big frame.  When I shook his hand, I felt as though he could crush mine if he chose to.  Luckily he didn’t.  Bob Noyce was the greatest “people” guy that you ever met.  After one meeting with him, you walked away feeling like you were his best friend.  He was a really likeable guy with tons of charisma.

Kilby’s patent specified putting all the components on the same piece of germanium, but he interconnected them with wire bonding techniques.  Obviously this was totally unpractical with respect to making a real IC.  But Bob Noyce got it right.  His patent put all the components on the same silicon chip and interconnected them with deposited, patterned, and etched metal  — just the way we still make them today.  The Noyce patent is displayed on a plaque in front of the Charleston Road building where he made the invention.  Kilby beat Noyce to the punch (and to the patent office) by six months, but you couldn’t make an IC without Noyce’s metalization.  After a big legal battle, TI and Fairchild cross licensed their patents and that was the end of it except for the ongoing arguments over which state should get the credit — Texas or California.  Since I was born in Texas and live in California, I feel confident that, if this thing is ever really settled, I’ll come out on the winning side.

While I’m at it, a little bit about Moore’s law. Everybody knows about Moore’s Law.  But here’s some perspective from 1965.  When Gordon Moore first articulated his “law”, he was predicting that the number of components on a chip would double from a starting point of 32 components in 1964 to a gargantuan 64 components in 1965.  The logarithmic graph that he published was so bold as to predict a time when there would be 64 thousand components on a chip.  To the guys in the fab trying to make these things, that seemed crazy!!  I know it seemed crazy to me when I got there in 1968!  Gordon firmly believed in the 64K number, but if you had asked him about 64 million, he probably would have thought you were nuts.  Today we’re doing on the order of 64 billion.  Wow.  Sounds like more Alice in Wonderland stuff, doesn’t it?

Fairchild moved to a bigger facility in Mountain View in 1960. They had started on Charleston Rd in Palo Alto.  That building is still there.  It’s a Historical Landmark. The new facility comprised a headquarters building at 313 Fairchild Drive and an adjacent manufacturing building at 545 Whisman Road in Mt View.  Later they added the “Rust Bucket” (The metal framed structure was painted in an orange color that looked like rust) on Ellis Street.  When I reported to work on September 9, 1968, I headed to 545 Whisman Road where I spent the next eight years.

Eventually, working for John Carter drove Noyce nuts.  Carter didn’t see the potential of semiconductors.  He didn’t want to spend the money to do the job right.  He had an east coast management style which was very, very different from the style that had developed in the Bay Area semiconductor business.  He didn’t believe in stock options for the rank and file.  This friction and other issues eventually led to Carter’s resignation, but Sherman Fairchild decided not to give the top job to Noyce, who thought he deserved it.

Noyce and Moore decided to leave.  Andy Grove, who was running part of the Palo Alto R&D labs, heard about it and asked to join them.   (More about Andy later) They left in June 1968.  I had accepted my job in May.  They left in June.  Hence, all the craziness in my “Day One” and “Off with their heads” chapters.  In order to fill Noyce’s position, Sherman Fairchild recruited Lester Hogan.  Les had been running the semiconductor division of Motorola. Earlier in his career, Hogan had worked under Bill Shockley at Bell Labs.  Hogan agreed to join, but only if he could bring eight of his best people along with him.  Fairchild agreed.  In they came.

And the stuff hit the fan!!

Pictured: The contenders for the title of “Inventor of the integrated circuit”.  On the left Jack Kilby.  On the right Bob Noyce.  In my view  the title goes to Bob, but Jack was a really smart guy and the nicest man I ever met

2 Replies to “The Integrated Circuit”