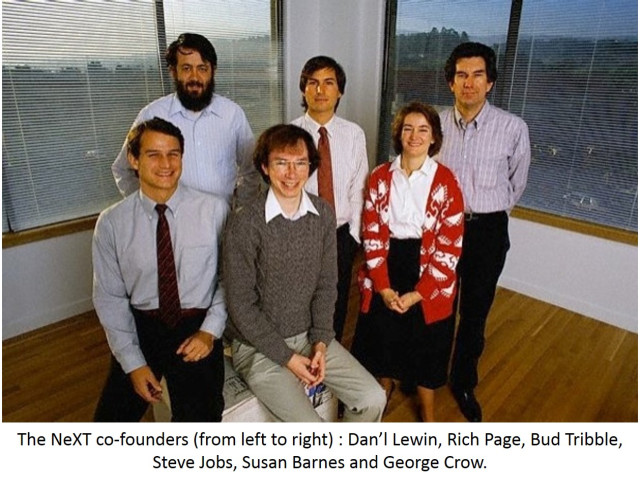 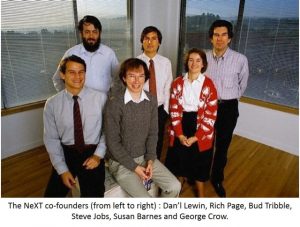 My first meeting with Steve Jobs was in early 1987 when he was running NeXT Computer.  I was a VP at AMD and was hunting for potential customers.  I visited him in the NeXT Palo Alto facility with the objective of selling him some existing AMD products.  He had a different objective:  to get me to produce a new product that we had no plans to make but that he felt he needed for his NeXT machine.

Have you ever noticed that dogs can always tell if a person likes them?  Somehow we humans give off some sort of emanation that every dog can pick up.  You can’t fool a dog.  People are the same in concept,  but less sensitive.  Sometimes we can pick up the emanation,  sometimes not.  It depends on how strong the emanations are.  Well  — Steve Jobs could really emanate!!  You didn’t have to be a dog to pick up Steve’s emanations.  About two seconds after I shook Steve’s hand,  I picked up — this guy doesn’t like me.  He thinks I’m stupid. —  He didn’t say it.  He was cordial enough in a stand-offish sort of way. But there was no doubt!!  But don’t feel badly for me. I didn’t feel alone.  In the course of that meeting I found out that Apple was stupid too. And John Sculley.   And anything to do with IBM/Microsoft.  So  — at least I was in good company.  But here’s my take: he was very, very smart.  He’d gone to a liberal arts college for one semester and then dropped out.  He’d never had a day of formal training as an engineer.  Yet  — I could barely keep up with him as he was describing the technical job that he was trying to get done. 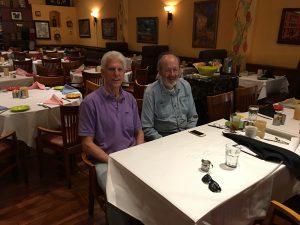 The second meeting was not that pleasant.  I told him that we had decided not to make the part that he wanted.  That didn’t please him and he said so.  He let me know in clear terms that I was not making a smart decision.  He also let me know that stupid decisions were made by stupid people.  QED.  He might have been right.  In fact, as I look back on it,  he probably was right.  Rich Page was in those meetings too.  Rich was once a fellow at Apple and was now one of the NeXT technical gurus.  Rich and I had lunch the other day  (See the attached picture). We couldn’t remember exactly what Steve was asking for,  but we could guess well enough to agree that it probably would have been a good product.  Oh well. Still — even though I was never comfortable with Steve, I was in awe of the guy.  He was smart, rich, and good looking.  When it suited him,  he could really turn on the charm! I thought that if he could come up with a little better way of dealing with people that he could own the world.  You know what?  He did.

Sculley ran Apple until 1993.  It wasn’t easy!  Selling personal computers was nothing like selling mainframes, but it was also nothing like selling soda pop.  It was a tough combination of the two.  The company languished and Sculley was eventually fired. Mike Spindler took over briefly.  Spindler was replaced by Gil Amelio who had been running National Semiconductor.  One of the movies that was made about Apple did a not very favorable depiction of Gil.  That was wrong!  Gil and I worked together at Fairchild back in the 70s.  I love Gil Amelio.  I think he’s a really, really good guy.  Smart.  Hard working.  Good with people.  Unfortunately Steve Jobs didn’t see it that way.  Why did that matter?  Because Amelio decided to buy NeXT computer and when he did, he brought Jobs back as an advisor.  No good deed goes unpunished.  Within a year Gil was out and Steve was back in power.

Steve Jobs was more than just a technologist.  In fact, he wasn’t really a technologist at all.  But,  as Laurene Jobs said, Steve could see what wasn’t there and what was possible.  A great example of this is the IPod.  In 2000, Toshiba announced a new, very small form factor hard drive with a 1.8 inch diameter platter.  Jobs saw it at roughly the same time that everybody else did,  but his mind put the pieces together better and faster than anyone else.  When he put the pieces together, he saw a music player.  A year later, in 2001,  the IPod was born. Soon it seemed as though every teenager in America had an IPOD.  I had one too and I was nowhere near to being a teenager.  The Ipod was a huge win!!

And yet a third example?   The MAC,  the IPod  and then????   —  The IPhone!!  People wanted to be on the web from wherever they happened to be – not just from their office.  And they wanted to do it without having to work hard at it  — that is,  they wanted a really simple GUI on a big,  easy to read screen.  It wasn’t there.  But it could be.  Apple didn’t invent dual touch technology.  Apple didn’t invent capacitive sensing. Apple didn’t invent the ARM 11 processor.  But Steve saw what wasn’t there and what could be.  He acted on it.  He won again.  In the neighborhood of two billion IPhones have been sold.

Over a decade or so Apple introduced I-Tunes,  the IPod,  The IPhone, the IPad and finally the IWatch.  All really easy to use.  So easy that even a CEO could do it (My administrative assistant used to use that line all the time) What difference did those products make?  Apple went from a company who was hemorrhaging cash at the time of Gil Amelio’s appointment to a trillion dollar market-cap company. Pretty big difference,  wouldn’t you say?!!

To repeat Laurene Jobs  “Steve had the ability to see what wasn’t there and what was possible.”  How hard could that be? Anybody could do that,  right.? Steve got it right almost every time.  I tried like crazy to do it,  but could never quite pull it off.  One of us must have been a very special person.

I hope it was him!

Next week: the decade that changed the industry.

Pictured:  Above – Rich Page next to Steve Jobs with the other founders of NeXT Computer.

Below – Rich and I having lunch at Don Giovanni restaurant a couple of months ago. If you enlarge the picture you can barely make out some diagrams sketched on the (paper) tablecloth.  That’s what happens when a couple of old engineers share lunch.