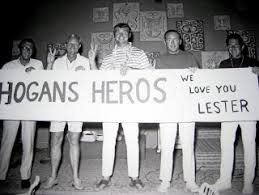 I started out as a supervisor in the wafer sort and class area.  Today you’d call those probe and final test.  My first boss, a man named Les Faerber who I had never met,  met me in the lobby,  got a smock for me,  took me into the test area and introduced me to the ladies (All the operators were women in those days).  I had no idea what they were doing.  I didn’t even know that integrated circuits were made on wafers much less that those wafers needed to be “sorted”.   Then he said, “I’ve got a meeting.  Gotta go.”  And he left.  Terrifying!!! I was standing there trying to act as though I knew what was going on (I didn’t have a clue) when a really aggressive guy with a British accent came charging in. “Who’s the supervisor here?!!!”  “Why isn’t the waterfall running?!!!”  And, of course I thought to myself,  “Who is this guy? What’s a waterfall? What am I doing here?!!!”  It was John Carey.  He was the operations manager for all integrated circuits.  He wasn’t a patient man!  He scared me to death the first few times I dealt with him, but after a while I grew fond of him.   That was a shame, because very soon he would fall victim to “Off with their heads”.

That first afternoon a technician named Jack Drury was trying to teach me a little of what we were doing in wafer sort and class.  I’m sure it crossed his mind to wonder why an experienced technician like him was now working for an acne-faced college kid who had no clue about anything that mattered, but he tried to be helpful.  We stood in front of a prober and watched a wafer being tested (sorted).  I was impressed with the wafers.  “Wow  — you can make hundreds of these IC things at a time.  That’s cool!”  Each wafer had a few hundred “dice” on it.  Our job was to test them and identify the good ones. (At Fairchild, we called the individual ICs “dice”.  A single IC chip was a “die”. At most other companies they called them “chips”.)  The prober would stop on each die.  The tester would flash cool looking lights on and off for a few seconds, and then a small mechanical arm would put a little red dot on the die.  It seemed pretty efficient.  I asked Jack what the little red dot was for.  He said, “Oh.  That’s the inker.  We put a red ink dot on each die that doesn’t work right.”

Me: “So all of these wafers that were already sorted have red dot’s on all their dice as well”.

Maybe that’s what led up to “Off with their heads.”?

What was “Off with their heads?”  Well,  as I described in “Day One”,  many heads had already rolled after Hogan’s Heroes arrived but before I got there.  I heard some people saying good things about a man named Tom Bay.  I asked what job he was in.  “Oh.  He’s gone.  Fired a month ago.”  Tom was formerly the VP of marketing and, as far as I knew, the first victim of “Off with their heads!” Then, shortly after I got there, the VP of sales, Jerry Sanders, was fired.  Jerry, of course, then founded AMD and went on to a great career.  Then, John Carey (The guy who wanted the waterfall running) was fired.  He went on to be the CEO of IDT. Carey was replaced by a man named John Husher, but he was in and out of there so fast that I never got to meet him.  Bob Noyce,  Gordon Moore, and Andy Grove had left to form Intel.  Charlie Sporck gone too.  Charlie had left to be CEO of National Semiconductor.  Charlie took Floyd Kwamme,  Don Valentine,  and Pierre Lamond (all of eventual Venture Capital fame) with him.   Gene Kleiner was gone as well.  Gene was one of the traitorous eight but went on to be the head of what is probably the most famous Venture Capital firm of all – Kleiner Perkins.  In fact, every one of the Traitorous Eight founders left under various circumstances.   There were people disappearing left and right.  Sometimes you didn’t know if they were fired or if they just quit.  One morning you’d come in and they were gone. Why?  Where?  How?  Who knew?  Who was doing all this firing? Who knew?  It seemed as though a Vice President and Hogan’s Hero named Gene Blanchette was at the root of a lot of it, but before long, Blanchette himself disappeared.  I don’t remember how or why.  I probably never knew.  And then, in 1974 the coup de grace.  Hogan himself was gone. There was a popular song in 1967.  “White Rabbit” by The Jefferson Airplane.   Its lyrics put a new spin on Alice in Wonderland.    —  “And the red queen, ‘Off with their heads!’ ”  —  Wow.  That’s too close for comfort around here!!!

Have I rediscovered Alice in Wonderland? Did I go down the rabbit hole? And where did I put that hookah?

Pictured:  Jerry Sanders at the 1968 Fairchild Hawaii Sales conference.  Jerry had just been informed that Les Hogan had been hired to be his boss.  Jerry sent this picture to Les.  Three months later,  Les fired Jerry.

4 Replies to “Off with their heads!”