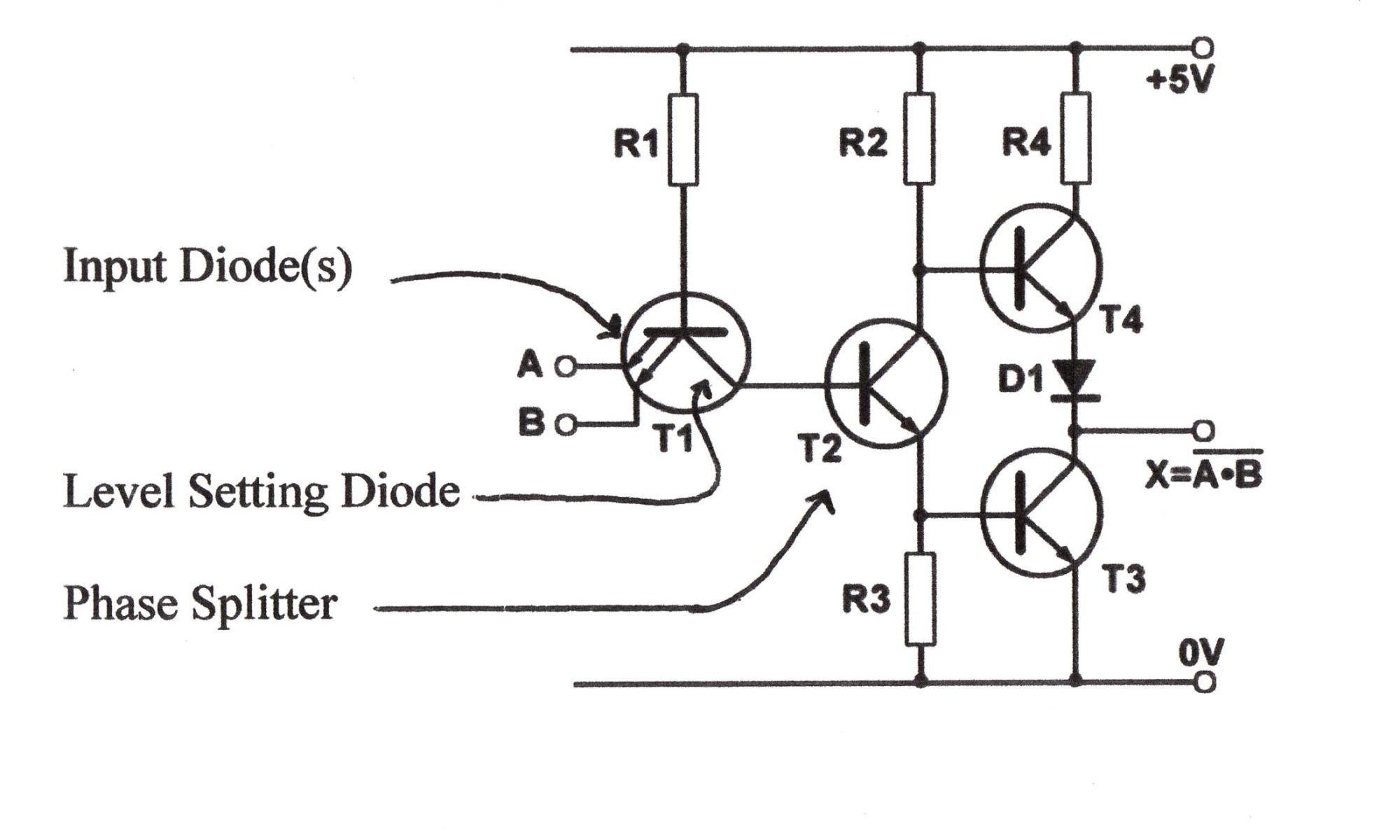 Most people in the IC business understand very well that TTL products dominated our industry for 30 years or so.  They’ll also probably know that TI was the king of TTL. But,  if you ask those people what TTL is,   most won’t have any idea.  If you’re one of those people, rest easy.  You’re about to find out.

There were three IC companies that really mattered in the early days.  Fairchild,  Motorola,  and Texas Instruments (TI).  There were a handful of Wannabe’s as well —  National,  Signetics,  Amelco, Siliconix to name a few —  but Fairch,  Mot, and TI were the big guys. Intel had not yet arrived on the big scene.  The first standard logic family was Fairchild’s RTL.—   Resistor-Transistor Logic. — (Inputs came in through Resistors.  Outputs went out through Transistors.  They were Logic devices).  It was built using bipolar transistors as was almost everything in those days. Micrologic was the name they gave the family.  Sadly, RTL was brain dead.   Fairchild had a great head start.  The Noyce patent really worked. The Kilby patent didn’t.   But – the RTL circuit that Fairchild chose had big problems  — namely fan in,  fan out,  noise margin,  and speed.  Sadly, those pretty much captured everything that mattered in those days.  So – Fairchild switched to DTL. — Diode-Transistor Logic. —  (The inputs came in though Diodes.  The outputs went out through Transistors.  It was Logic).  DTL had been invented by others earlier.  IBM had used versions of it in their 360 series of mainframe computers.  It was a much better design than RTL.   It solved all of the RTL problems except speed. Fairchild introduced their DTL family in 1964.

TECHNO-BABBLE ALERT.  If you’re not a circuit geek, skip the next paragraph!! 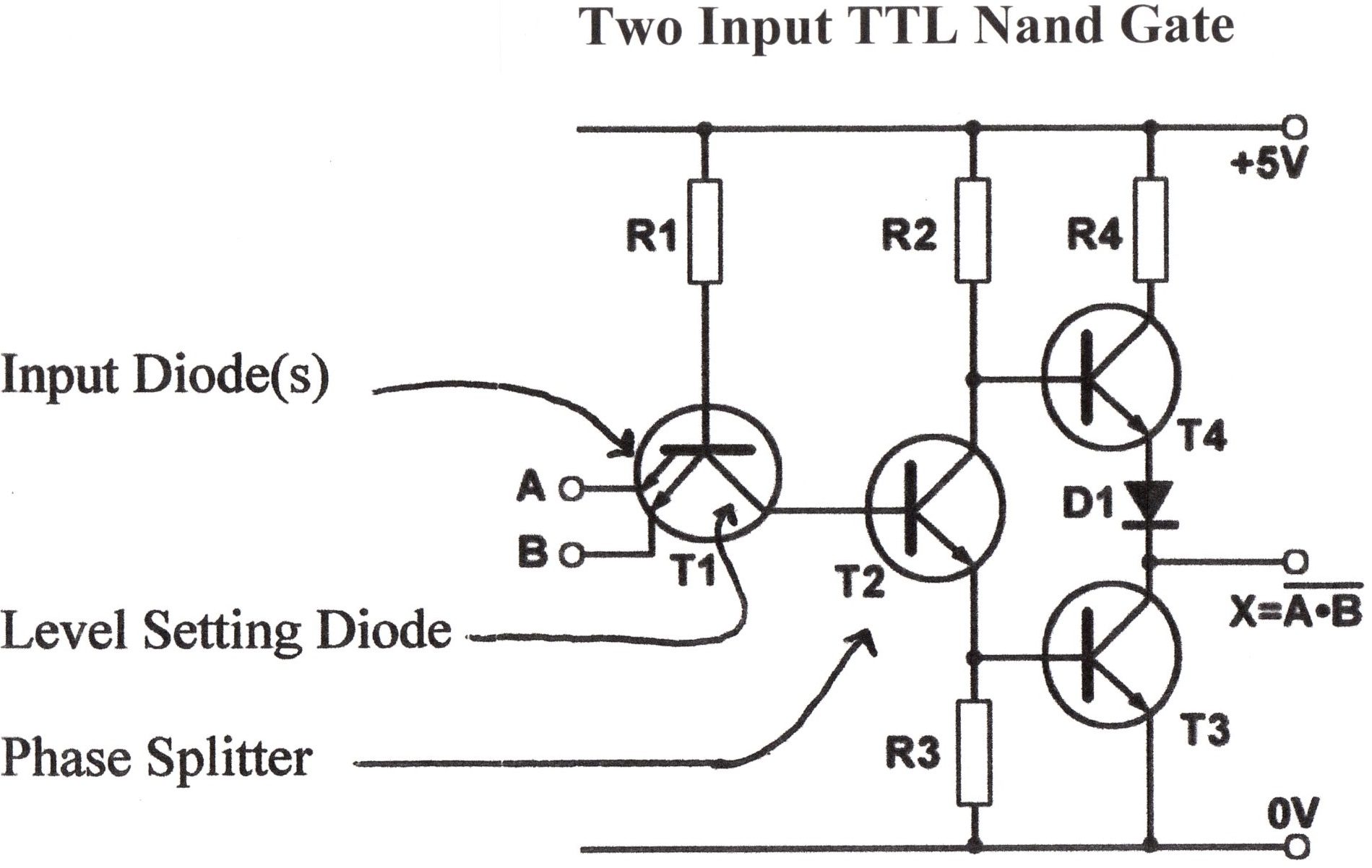 DTL gates included back to back diodes.  The cathode of one diode (called the input diode) went to the input pad and the cathode of the other diode (called the level setting diode) went to the base of a transistor that we called the phase splitter.  The diode anodes were common.  Why not put those two diodes in the same isolation region?  Instead of two diodes, use a single bipolar NPN transistor!  The input diode would be the emitter-base junction of the transistor.  The level setting diode would be the collector – base junction of the transistor.  (for a two input gate, the transistor would have two emitters.  For a four input gate,  it would have 4 emitters.  That schematic diagram looks a little weird,  but it’s no problem to make) Why was that better?  When the input pad went low, the transistor turned on and yanked the charge off of the base of the phase splitter.  That shortened the time required to turn off the phase splitter which was the number one problem facing the engineers who were trying to speed up the circuits. As with most inventions,  it isn’t always completely clear who deserves the credit.  A real, working IC version of a TTL gate had a lot more to it than my simplified description above.  Tom Longo, working at Sylvania,  was the first to put it all together into a commercially successful IC.

It was a big breakthrough!! After working through a few “pet” names (Longo called it  SUHL and James Buie of TRW called his version TCTL), it ended up being called TTL (Transistor – Transistor Logic).  Whatever you called it, TTL was better!  It was faster than DTL with similar costs. Longo and a few others may have invented TTL, but it was Texas Instruments who made hay with it.  TI introduced their 5400  TTL family in 1964  — the same year Fairchild announced their DTL family.  But TTL was better!  TI soon put their TTL products in an inexpensive plastic package which they had developed.  The plastic package gave them lower costs than anyone else.   Early on TI sold TTL gates for $1.00 (actually twenty five cents per gate for the quad, two input NAND gate. There were four gates in each package).  That was an outrageously low price for the times.  They stole the march.  TTL took over the world and TI became the king of that world.

Why didn’t Longo et al get the credit they deserved?  TI took such a huge, early lead in TTL that everybody thought it was a TI invention.  It wasn’t.  TI recognized a good thing when they saw it and they jumped on it.  They pounded the market with it.  There’s a Harvard case study wrapped up in this somewhere.

And Tom Longo?  He later moved to Transitron and then to Fairchild.  He was a very smart guy and a butt kicker extraordinaire!  I couldn’t decide if that was a good thing or a bad thing.  I worked several levels below him at Fairchild so I didn’t interface with him on a daily basis.  The butt-kicking was sort of fun to watch  — unless it was your butt being kicked.  (Of course,  now and then I took my turn.) Speaking of butt-kicking, though, Tom never liked the fact that TI was kicking our butts with the product that he had invented.

Fairchild,  seeing the success that TTL was experiencing, later tried to get into the TTL market  — at first by introducing a proprietary family of  TTL products ( the 9000 family) instead of by second sourcing the 5400 family.   But there was a problem:  we didn’t really understand collector – emitter leakage.  (Iceo).  One thing we knew about Iceo,  though, was we had plenty of it!  Iceo was our dominant yield problem.  This was exacerbated by gold doping.  The big problem with respect to speed those days was turning off bipolar transistors.  Turning them on was easy, but to turn them off you had to wait for all the minority carriers to exit the base region.  That took forever.  Somebody had figured out earlier that a few gold atoms in the base region would help the minority carrier lifetime problem.  We called that gold doping.  You had to gold dope in order to make the speed requirements. The problem? Gold made the Iceo problem worse.  When you gold doped, leakage went up, yields went down, and costs went up.

So  —  circa 1969 — our yields were bad and costs were high.  The solution? Some of the Motorola guys brought in by Hogan in turn imported what they thought was the Motorola process (Sadly —  it wasn’t quite) and installed it in one of the Mountain View fabs. The yield was pretty good right out of the chute so we went into production.  We didn’t do HTRB (High Temperature Reverse Bias is a simplified form of Life Testing).  There were no formal qual requirements at Fairch in those days.  We just went straight into production.  Big mistake!!!!!  We had screwed up!!!   There was an Op Life problem that we would have caught if only we’d done HTRB. Several months of our early production wafers were unreliable!  After we figured out that we had a problem, we burned in some of the units we had made but threw out the rest.  It wasn’t any fun!!  Heads rolled.  The red queen was still lurking.

Off with their heads was still operative.

Tom Longo went on to become founder and CEO of Performance Semiconductor.

Next week:  The curse of P&L management

8 Replies to “Texas Instruments and the TTL Wars”