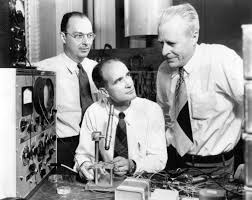 How did it happen?  How did Fairchild transform over a decade into the “off with their heads” culture?  To understand that, you need to know a little about the William Shockley story. William Shockley was born in London in 1910.  He moved to Silicon Valley when he was 3.  Of course, it wasn’t called Silicon Valley then.  There was no silicon in Silicon Valley until he brought it here in 1956.   He was a problem child from the get-go.  He had a terrible temper — generally driving his parents nuts.  But — He was smart!!!  He could count to four before he turned one year old.  In fact, those who knew him later in life generally agreed that he was the smartest person they’d ever met.  He studied at Cal Tech and then did his PhD at MIT.  Then he took a job at Bell Telephone Laboratories in New Jersey.

Shockley built such a reputation for brilliance in his early years at Bell that the government “borrowed” him during World War II to assist in various planning and strategic efforts.  At one time he held the title of Director of Research for the US war efforts.  At the end of the war, he was awarded the National Medal of Merit for contributions made to our war effort even though he had remained, in fact, a civilian throughout the war.

After the war, Shockley returned to Bell Labs where he worked on semiconductor technology with Walter Brattain and John Bardeen.  The concept of a “transistor”  (It hadn’t been named that yet) had existed for several years in people’s minds,  but no one had succeeded in building one.   In 1947, Brattain, Bardeen, and Shockley succeeded.  They built the first functional transistor.  Most of the work, in fact, was done by Bardeen and Brattain, but Shockley was happy to accept most of the credit.  In 1956, the three received a Nobel Prize for their discovery.

In 1956 Shockley decided that he didn’t want to work for a salary any longer.  He reasoned that, with his superior intellect and the head start he had at understanding semiconductors, he should be able to make a fortune by starting his own semiconductor company.  Accordingly he moved to Palo Alto, his old home, and opened Shockley Semiconductor.   He hired the best and the brightest engineers and scientists that he could find (Most of them went on to have fabulous careers) and set out to conquer the semiconductor world.  There was just one problem — in a management role he was an overbearing tyrant.  He drove all of his employees nuts.  Eventually they bailed out.   In particular, a group of eight brilliant engineers lead by Robert Noyce and including Gordon Moore gave notice and left en masse.  Shockley dubbed them the Traitorous Eight.  Because of the mass exodus coupled with a major strategic error (Focusing on 4 layer diodes instead of transistors) Shockley Semiconductor eventually went under.

I met Bill Shockley at Stanford at some time during the 70s.    He was giving a lecture at Stanford that was open to the public. I wish I could remember exactly when the lecture was or what it was about.  I can’t. (I’m sure that it was not about eugenics, though).  After the talk, I waited until the crowd around him had died down.  Then I went up to introduce myself and thank him for creating the business I had already grown so fond of.  — The semiconductor business.   When you shook his hand, you could tell that he had a huge personality.  Clearly physically fit.  Strong grip.  Piercing, direct eye contact.  The usual signs.  I was seven inches taller, 50 pounds heavier, and 35 years younger than Shockley, but I had a pretty clear sense that he was the boss and that, in a fair fight, he could have kicked my ass.

Without question, he was the greatest semiconductor physicist of his time.  Unfortunately for him, though, he couldn’t stick to physics.  He took up eugenics.  He began studying intellectual differences between races.  He preached that the world was suffering from intellectual regression to the mean.  By doing so, he became a hated man.  His views were, in short form, that too many babies were being produced by parents with inferior intellect and not enough by parents of superior intellect.  Luckily (or should I say perversely?) he knew how to solve that problem.  He teamed up with a millionaire eugenicist named Robert Graham to open what was referred to as The Genius Sperm Bank.  Yes.  It really existed.  Officially it was “the Repository for Germinal Choice”

There are many different rumors about the sperm bank, but the most prevalent is that you had to be a Nobel Prize winner in order to be allowed to donate sperm to the Repository.  In any event, it’s certain that Shockley was a donor but uncertain if there were donors other than Shockley.  Rumors have it that Shockley was the only donor.  In fact, Shockley may well have had concerns that the sperm bank’s manufacturing division might not be able to keep up with the demand.  It was clear to Shockley that, once discerning ladies learned that they could choose to bear the child of a Nobel Prize winning genius, they would flock to the Repository and the regression to the mean problem would be solved.  There was just one problem.  They didn’t flock.

Eugenics is not a good subject to proselytize these days.  It wasn’t then either.  The world rapidly turned against him.  He became an outcast, even from his fellow professors at Stanford.  He died of prostate cancer in 1989.  An outcast. Deemed a racist.  A pariah.

But the Traitorous Eight lived on!

Pictured:  The inventors of the transistor.  From the left: John Bardeen, William Shockley, Walter Brattain.