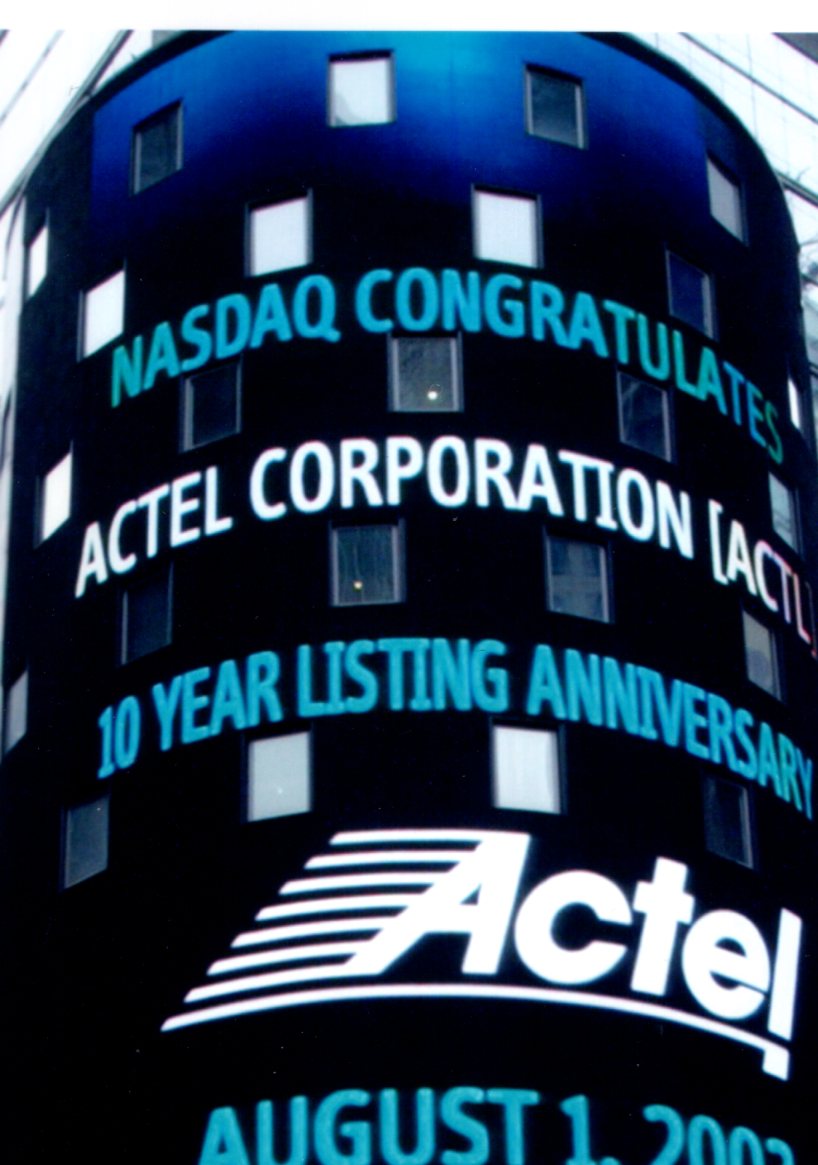 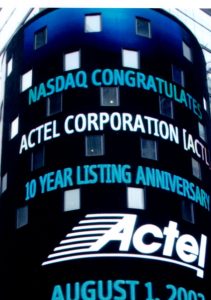 In 1990 Xilinx notified us that they believed Actel was infringing a patent that had just been issued to them.  My immediate thoughts – the patent system is all screwed up!  Actel had been developing our product for five years. We had been shipping it for a year and a half.  During all that time, we were totally unaware that there was or ever would be such a patent —   there was no way to know that Xilinx had filed for a patent or what was in the filing.   Then,  when the patent finally issued  —- BAM!!  We’d been blindsided!!  The “normal” way to handle this situation is to take a license  — to agree to pay a royalty to the owner of the patent.  There was a problem with that.  Bernie Vonderschmitt (The CEO of Xilinx) didn’t want to give any licenses.  I can’t really say that I blame him for wanting to keep the FPGA market to himself.  It was hard to get mad at Bernie.  He was a classy guy.  Yet,  if it had gone to court and Xilinx had won,  they would have been completely within their legal rights to enjoin Actel from shipping our FPGAs.  That would have forced us to close our doors – to shut Actel down.  I spent the better part of three years trying to solve this potentially very, very serious problem.

In those days the rule of thumb was that a start-up could go public once they had achieved two consecutive profitable quarters.  We reached profitability in 1990 and were hot to go public.  We selected bankers  — Goldman Sachs was the bulge-bracket bank  —  and started preparation.  Then, Goldman’s lawyers started to get cold feet.  What if the patent battle couldn’t be settled?  If the worst case came to pass   — that is — we went public, took money from new shareholders, and then had to shut our doors because we had lost the patent suit —   the lawsuits would be everywhere. Eventually we had to put the IPO on hold.  (IPO = Initial Public Offering AKA “going public”.)

I’m not sure that we could have settled the Xilinx patent suit.  Bernie hadn’t shown any interest in doing so.  But then a good break came our way.  Khalid el Ayat found that the early Xilinx parts didn’t use what we called segmented routing but that their later family (the 4000 family) did.  One of our original patents had some claims dealing with segmented routing techniques (thanks Abbas El Gamal,  John Green and team).  That allowed us to file a countersuit against Xilinx.  Calmer minds prevailed.  We settled the suits peacefully.

Note:  Xilinx later sued Altera for infringing that same patent.  They weren’t able to settle and eventually went to trial.  My analysis was that Altera did infringe, but that the patent wasn’t valid over prior art.  The jury eventually ruled that the patent was indeed valid but that Altera didn’t infringe.  In my mind, wrong on both counts.   That’s the reason that you never want to go to a jury trial with a technical issue.  The jury won’t understand it and has an excellent chance of getting it wrong.  This case was very technical.  I doubt that the jury members understood 10% of what they were being told.

Once the Xilinx suit was settled,  our IPO efforts cranked up in full force.  Everything was looking good.  Then we hit another snag.  We had been selling 1.2 micron material, but we needed 1.0 micron product if we were to be cost competitive.  The process was ready to go,  or so we thought,  but the first production runs to come out had terrible yields.  If we couldn’t run the 1.0 process,  we couldn’t compete well cost-wise.  That would have to be disclosed in the IPO documents.  We had to put the IPO on hold for a second time.  Then, we cracked the code.  We figured out the problem and fixed it.  Thanks Steve Chiang!  Thanks Esmat. The IPO was back on.

IPOs are hard work.  Huge amounts of effort go into putting together the documents.  Everything that could end up mattering to a prospective shareholder must be disclosed and explained.  The explanations had to be right.  If the stock went down for any reason other than the market’s fickle nature,  you could expect a lawsuit.  The point of the suit would be that you hadn’t properly disclosed the risk of some aspect of the company and that if you had, the shareholders wouldn’t have bought the stock and hence wouldn’t have lost their money.  I spent many, many, many hours writing those documents. It took a long time and a lot of effort by a lot of people to get the documents ready!  Those documents are a big, big deal!

Once you have the documents done they must be approved by the Security Exchange Commission.  The SEC folks are tough.  They invariably find fault and demand improvements.  Once the SEC has given their approval,  you can start the “road show”.  The point of the road show is to meet with the people who are about to invest and teach them the basics of the company’s business. The road show is grueling.  You present the company pitch over and over and over again.  Breakfast presentations.  Morning one-on-ones.  Lunch presentations.  Afternoon one-on-ones.  Dinner presentations.  Then, you head to the airport, fly to a new city, and do it again.  One day we had a breakfast meeting in Minneapolis, a lunch meeting in Chicago,  a dinner meeting in Madison, and then flew to the east coast where a full day was set up for the following day.  When we landed, Dave Courtney (Our Goldman Sachs guy) had a message that our afternoon meeting the next day had been canceled.  That would mean that we had a couple of hours on our hands.  I suggested that we go see the Liberty Bell  — I had never seen it.  Dave thought that I was really stupid!  “John, the Liberty Bell is in Philadelphia.  We’re in Boston.”  Actually, I knew where the Liberty Bell was.  I just didn’t know where I was.  All the cities had become a blur by then.

A couple of days later in New York we got on a plane at Kennedy Airport and prepared to head home.  We were done!!!  It was a Friday afternoon.  We would celebrate over the weekend – then  – Monday morning when NASDAQ opened  — there would be a new listing:  ACTL.  Has a nice ring to it,  don’t you think?  ACTL!!!!!  Just before I boarded the plane, someone from Goldman brought me a fax that had arrived a few minutes earlier.  I took a sip from the glass of wine that I’d already treated myself to and opened the envelope.  It was a letter from a struggling start-up accusing us of infringing a patent of theirs.  I almost spit out the wine!!!  When I took a quick look at the patent, it wasn’t clear that it really applied to us.  But  — their timing was clearly calculated to get some quick cash from us.  The patent would constitute a new “risk factor” that should be disclosed to all potential investors.  To do that, though, would mean putting the IPO on hold for a third time  — redrafting and reprinting all of the documents, waiting a month or so for the new info to disseminate, going through SEC approval again and then doing the road show all over again.  Devilishly clever timing, don’t you think? But also, in my mind, completely without class.  We were supposed to “price” and open the market Monday morning.  The weekend when I planned to relax and celebrate was shot.  We sorted it out that weekend.  I don’t remember any details, but I’m sure it involved a tidy payment to the very clever offended party.  What I do remember is being really relieved that we had sorted it out.

Monday morning, August 3,1993 when they rang the opening bell*,  Actel stock was trading publicly right along with the likes of Apple and Intel!!  We opened at $9.50 per share.  During the day we ran up to $13.00. We were a public company.

Next week:  The Mars Rovers.

*Actually they don’t ring a bell at NASDAQ.  They just push a button.  It’s the NYSE that rings a bell.  I found that out in 2003 when I was invited to open the market as we celebrated our tenth anniversary of being a public company.  I gave a little speech,  waited a couple of minutes, and when they gave the sign, reached out and pushed a small black button.  Six years in college for that?!!

Pictured:  NASDAQ building at 42nd and Broadway in New York City on the celebration of our tenth year of being listed on NASDAQ.