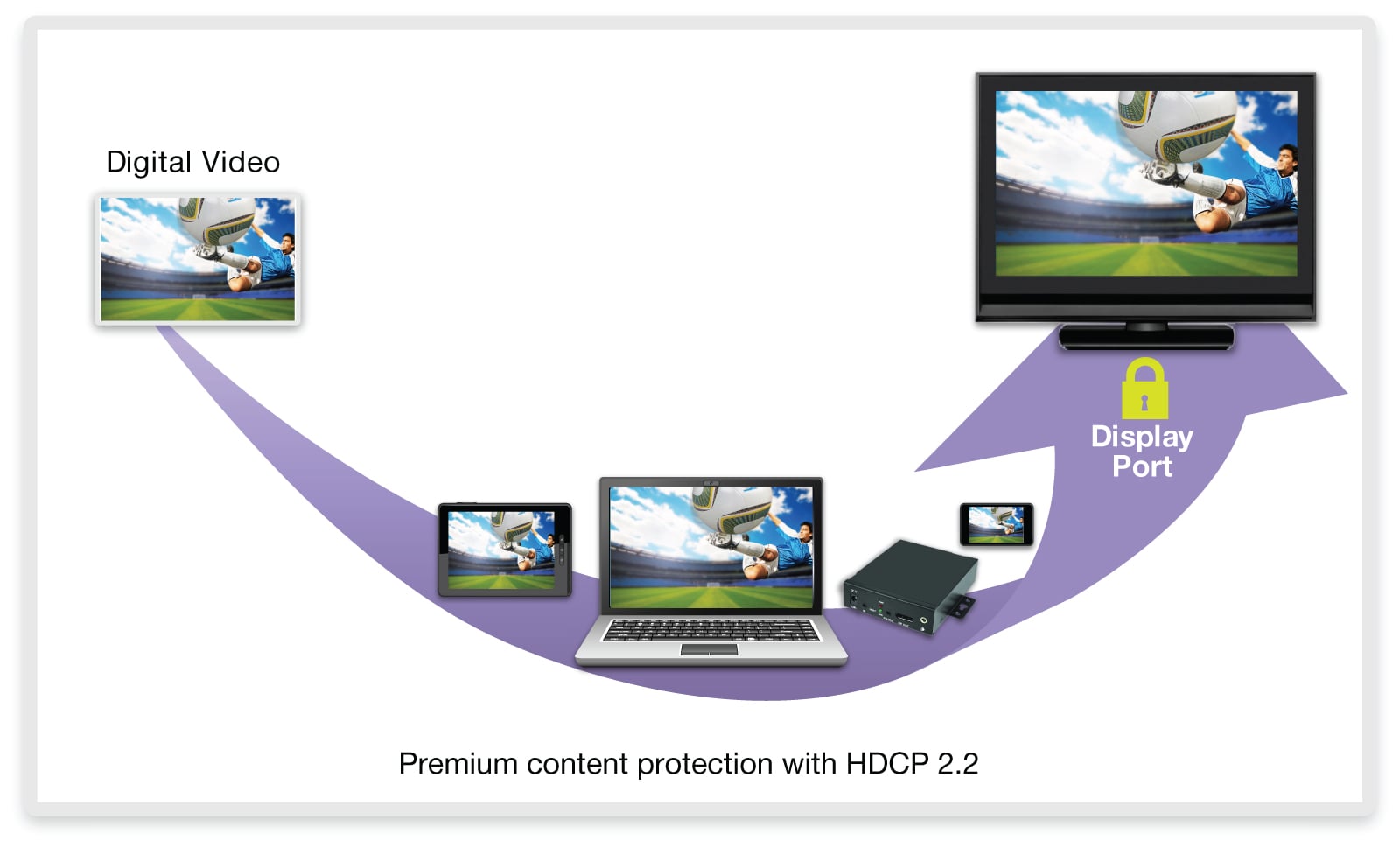 Back in college my roommates figured out that the TV cable coax wire was still connected to our apartment. As a result, I was able to watch the Richard Pryor movie Silver Streak about 30 times without a cable box, however the screen was partially jumbled from the simple content protection used back then. This was possible by aggressively adjusting the vertical and horizontal hold knobs. (Some readers may even be asking what these knobs were.) Such easy piracy has gone by the wayside in the intervening years. It’s probably a good thing. Digital Media is a large market worth huge sums of money.

The dilemma today is that consumers want seamless access to media, that absolutely needs to be protected, on a wide range of devices – from 4K video displays to hand held mobile phones, and everything in between.

The system relies on a set of forty 56-bit keys that is unique to each secured product. These keys must not be released publicly. There is a list of compromised devices whose keys have been revoked. The system also relies on random number generation. Each frame is encrypted with a unique key that results from an algorithm that uses a random subset of the 40 unique keys for that device. The source and sink devices stay in sync by sharing Key Selection Vectors (KSV’s).

HDCP works with DisplayPort, DVI, HDMI, GVIF and UDI. DisplayPort has become a popular interface to transport video to display devices. It’s confluence with Thunderbolt connectors using the mini DisplayPort helped propagate it widely. DisplayPort differs from the familiar HDMI in that it is a more structured protocol and offers more flexibility and interoperability. Indeed, DisplayPort can be converted to HDMI, DVI or a number of other formats at the connection to monitor. Of course, HDMI is still probably the number one interface used for connecting display devices.

Nevertheless, DisplayPort will play an important role as video interfaces move from HDMI to USB Type-C. The perennial problem with laptops and even desktop computers is the proliferation of cables and connectors. It starts out simply enough – first comes the power cable, after which you connect your HDMI. Then comes a USB device like a mouse or external camera. Finally, often there is external storage for data backup, and so on. Soon there is a Gordian Knot of cables you must contend with.

USB Type-C combines power (up to 100W), high and low speed USB and has provisions for using some of its high speed pairs for other data streams. USB Type C will always provision USB 2.0, but has up to three other pairs that can carry high speed data. This is perfect for video. This means that USB Type-C can provide connections for most everything needed by a laptop, plus sophisticated power management and charging. Indeed, my 2015 MacBook has a single lonely headphone jack and one USB Type-C connector – period. 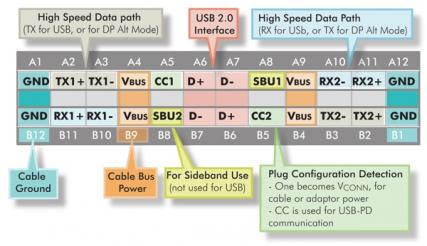 Video over USB Type-C is handled with what is called DisplayPort Alternate Mode. Native DisplayPort is sent over some of the high speed pairs. The USB Type-C specification allows for automatic configuration of direction, data channel usage, etc.

There is a wave of new products that incorporate USB Type-C, including laptops and peripherals. This is bringing about a demand for HDCP Intellectual Property (IP) for integration into SOC’s. This requires proper implementation of a laundry list of security features. Synopsys has published an article that looks at what is required. Devices need to do more than implement HDCP, they must do it properly to stay secure. For instance, if the device keys are compromised the entire production run of end user product can have its HDCP license revoked. The video processing pipeline needs to be protected. There also needs to be a NIST SP800-90C compliant random number generator on board. And that is not all. 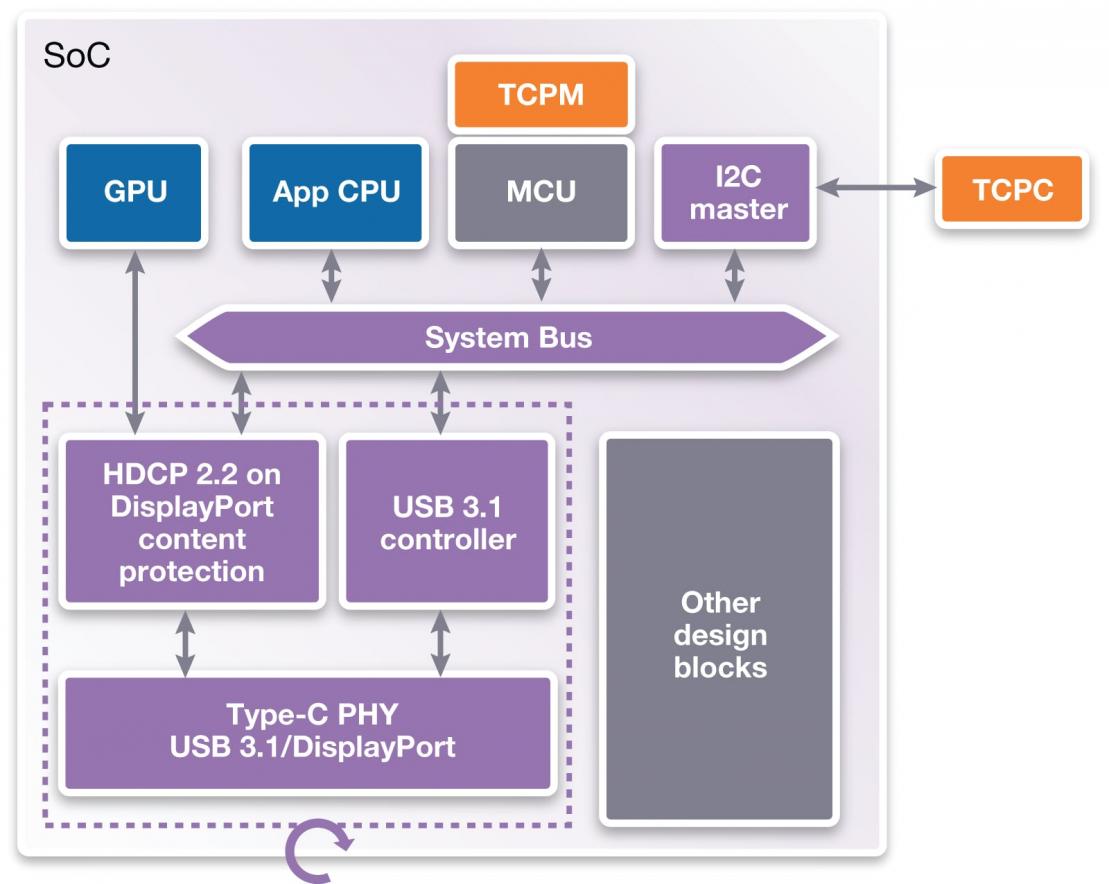 The Synopsys article covers present day requirements for content protection implementations, and it addresses how to accommodate potential future developments to make sure that products remain viable.

While we enjoy the convenience of high quality video almost anywhere we want it, there is a lot of thought that needs to be put into developing the products that support this functionality. The Synopsys article does a good job of laying out all the element. A copy of the article can be found here.