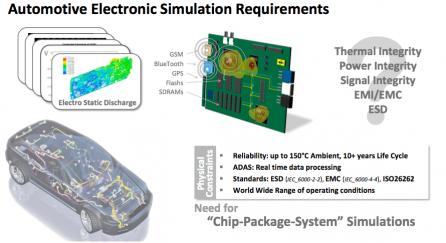 Simulation is a broad technique spanning certainly digital logic and circuit simulation but also methods beyond these which are particularly relevant to ADAS design. In fact, much of the design of full ADAS systems begins and ends with these types of modeling. This is in part due to the need fully validate integrity and reliability of electronic systems all the way from the system level down to chip design and in part because sensors are as much a part of the system as the chips; for these sensors correct functioning / integrity / reliability depends as much or more on the surrounding environment and must be accurately modeled before it is built.

Ansys recently hosted a webinar highlighting several examples of this kind of modeling relevant to early-stage design and late-stage analysis for ADAS systems, in a range from electrical to electromagnetic, thermal and mechanical analysis. In fact, it is often necessary to combine two or more methods to get a realistic understanding of behavior, in an approach known as multi-physics analysis. While there are other multi-physics solution providers, as far as I can tell Ansys is the only one with a solution extending all the way from full-system structural, fluid dynamics and electromagnetics down into detailed chip and package analysis. (They also partner with TSMC on modeling for InFO systems, which should give you a sense of their technical depth in this multi-physics domains.)

The first half of the webinar discussed need to ensure integrity and reliability for subsystems (say a board) down to the design of the die in an SoC on that board. Functionality isn’t a primary consideration here, but thermal, power and signal integrity are, as are meeting EMI/EMC, ESD and mechanical objectives. This has become a bigger deal than you might imagine, pulling in multi-physics analysis across the range from chip to package to system. 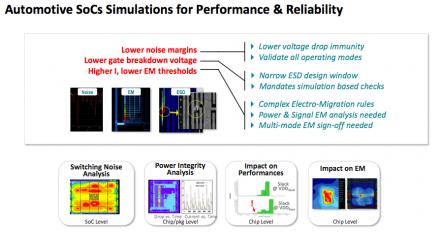 The problem is that in ADAS (and some other cases) you can no longer decouple system design from chip/package design, thanks to several factors. There’s a lot more electronics in modern cars (as much as 40% of the value of the car), a lot more wired and wireless communication in the engine and cabin and those systems are aggressively power-managed because the value disappears if they drain the battery. All of that adds up to a lot more interference, a lot more heating and cross-system challenges in holding power rails steady between the board and the chip. 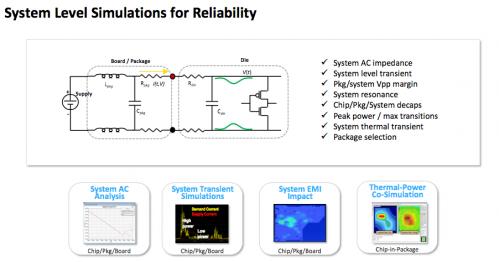 System components like sensors may switch (from a power consumption perspective) slower than an SoC, and impedances and therefore response times differ widely between board, package and system levels. So managing power and signal integrity requires careful design across these three levels. Of course, doing this also requires an understanding of thermal properties from chip to package to system. Which in turn also affects design for electromigration (EM) reliability at each level. And of course heating on the board can lead to warping, delamination and solder ball fracture so a mechanical analysis may be required. Similar considerations apply for EMI/EMC/ESD optimization.

It might seem that all this messiness could be avoided if the OEM/Tier1 just gave the chip/package design team a decent set of operating conditions/margins and let system and chip design decouple at that point. But it is becoming increasingly obvious that approach results in impractical over-design, failing to meet acceptable cost, performance and reliability goals. Co-design has become the only way to meet some of these objectives. Indeed, reliability alone, now demanding 15+ year lifetimes for critical components, has significantly contributed to these tightened expectations. That is driving increasing interest in the kind of multi-physics co-design, from chip to package to system, offered by Ansys.

The second half of the webinar focused on the sensor side of the design problem, in this case radar antennae. You can’t read anything about ADAS without seeing mention of radar, lidar and optical sensors for collision avoidance and autonomous control. Unfortunately, most such pieces don’t get past a mention, diving instead straight to chip-level architectures for recognition based on sensor output. But those antennae must be designed too and there’s a lot of interesting 3D electromagnetic simulation in that design. This section covered additional topics, including EM compliance, toll-booth pass-detection and vehicle-to-vehicle communication; in the interest of brevity I’ll just talk about the radar piece.

These systems commonly use a phased-array radar antenna, generating a highly-directed and narrow forward beam. Naturally this has side-lobes, more apparent in a decibel plot, which you can’t eliminate in a finite array. But still, the distribution is pretty tight. 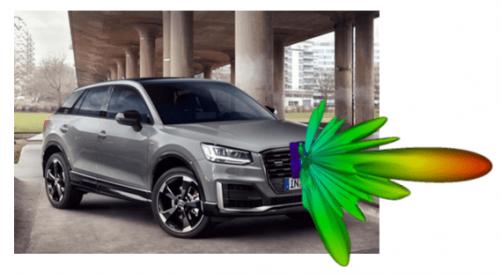 Now you mount it on the front of a car and the distribution gets a bit messier, thanks to diffraction and interference around the body. 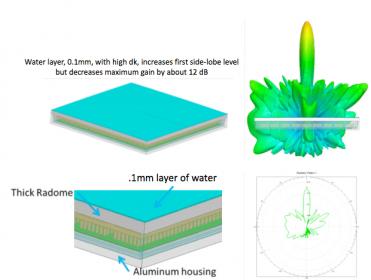 Then consider a thin layer of water over the radome, or other aging factors (scratches for example). The distribution again gets messier.

So far we’ve only been looking at the transmit pattern. What does this look like when the reflected signal comes back, encountering all those same factors? Even messier. It should be obvious from these few graphics that not only designing the antenna but also modeling and designing its mounting is critical to reasonable performance. 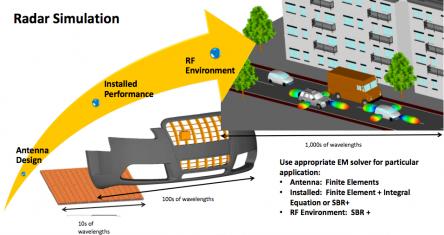 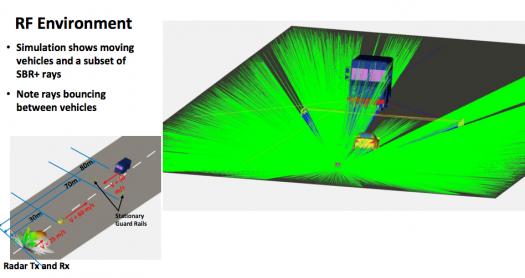 I’ll wrap up with one more graphic (this domain is great for graphics). This is from modeling a car and a truck approaching on a highway, exactly the kind of situation an automaker wants to model for crash avoidance and autonomous operation. The graphic above shows an SBR snapshot, although the version you will see in the webinar is dynamic, giving a sense of how the radar picture changes. You can see the complexity of reflections between vehicle this simulation. This also gives an understanding of why adding Doppler analysis along with lidar and other sensor inputs becomes so important for accurate sensing, independent of any recognition technologies that might be used in the back-end.

This is truly big-picture stuff. You can watch the webinar HERE.