Schematics are still the lynchpin of analog design. In the time that HDL’s have revolutionized digital design, schematics have remained drawn and used much as they have been for decades. While the abstraction of HDL based designs has made process and foundry porting relatively straightforward, porting schematic based designs largely has remained difficult and time consuming. Fortunately, Munich based MunEDA has just significantly upgraded their schematic porting tool called SPT. Even more fortunately I had the opportunity to travel to Munich to attend the MunEDA user group meeting in November to learn more about SPT and their other offerings. While I missed Octoberfest, the MunEDA team made the event extremely worthwhile and even entertaining.

Rather than starting from scratch, reusing an existing schematic can save a lot of time, and preserves the initial investment in its development. For this to happen several distinct steps are needed. The devices in the existing design need to be converted to the corresponding devices in the new pdk. Rough scaling should be applied to arrive at preliminary property values. The placement, scaling and orientation of the symbols must be adjusted to match the original. Terminals that have name changes must be dealt with. Lastly any new or deleted terminals have to be accounted for.

Without a porting tool there are only a few alternative methods to accomplish the porting task. In Virtuoso ad-hoc or custom Skill code could be written, but this replaces a schematic editing task with a coding task – one that is not necessarily any easier and creates new problems in terms of support and adoption by larger teams. It is also possible to pay for porting services. However, just like remodeling a kitchen or bathroom, you can expect to pay top dollar. Also, each subsequent design requires a new investment. Lastly, an ambitious designer might embark on the task of manually converting a design, but as mentioned above, this can be time consuming, difficult and possibly error prone.

The latest version of MunEDA SPT is largely GUI driven, making the entire conversion process flow much more smoothly. No more creating off-line spreadsheets to set up the process. After the GUI is launched and the source and target pdk’s are specified, SPT lists cell mappings based on matching up cell names. For each cell, a set of property conversion rules is created. Along with that terminal matching rules are set up. An expression for each property mapping can be created to handle systematic changes such as scaling. 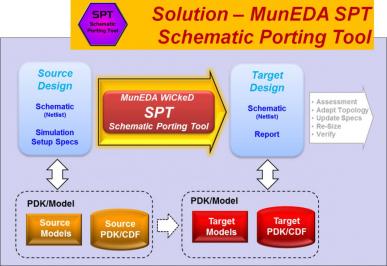 One of the things that makes the upgraded SPT attractive is that after the pin mappings are entered, it evaluates the symbols to decide the optimal orientation for the new symbol instances. The user still has final control of all the orientation parameters, but having a suggested orientation based on source and target pin placements will undoubtedly speed up the process and reduce manual intervention.

The GUI also has a feature to allow easy modification of property and symbol mappings. Once the conversion is configured, SPT lets users save the set up for future use. When it is time to convert a schematic, it can be done in 4 clicks. After opening SPT, simply select File->Run, then select the lib and cell.

OK, so we have all been around the block and know that a converted schematic most likely will not work. MunEDA’s expertise in circuit optimization comes into play next. MunEDA suggests looking at operating parameters first. Are saturated transistors still in saturation? Are linear transistors likewise still operating in the linear region? Operating specs across voltage and temperature need to be validated. Power is also a major consideration: is the design still in power spec? 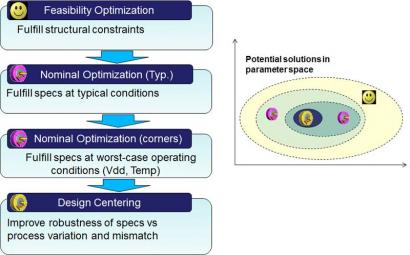 While some analog designs can remain at legacy nodes, many are required to move to newer more advanced nodes for a multitude of reasons. Sometimes they are enabling technology for digital designs that are compelled to move due to power or capacity issues. Many IoT designs benefit from lower threshold voltages found on newer nodes. Regardless the reason, it is potentially a huge time saver to have a tool like MunEDA’s SPT to make the task faster and easier. However, as indicated above, moving the schematic to a new pdk is only a prerequisite to the actual task of getting the circuit to work on a new process. MunEDA is uniquely helpful with the later task.

The user group meeting lasted two days and was full of MunEDA and customer presentations. I’ll be highlighting many of these in the weeks and months ahead. It certainly was informative and as the updates on SPT show, they have been busy enhancing their entire line to tools for circuit design and optimization. For further information on SPT and MunEDA’s other products please look at their website.