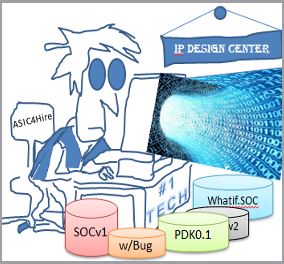 As companies scale by adding more engineers, there is a tendency to spread across multiple design sites as they strive to hire the best available talent. Multi-site development also impacts startups as they try to minimize their burn rate by having an offsite design center such as India, China or Vietnam.

Both the IoT and automotive companies are becoming dependent on 5G and AI as their key drivers, fueling trend for more heterogeneous design projects. At the heart of this increased design collaborations of multiple companies across different sites is the necessity of addressing how design data creations, sync-ups and handoffs are done. We will look into some critical success factors in this area and discuss their available solutions. 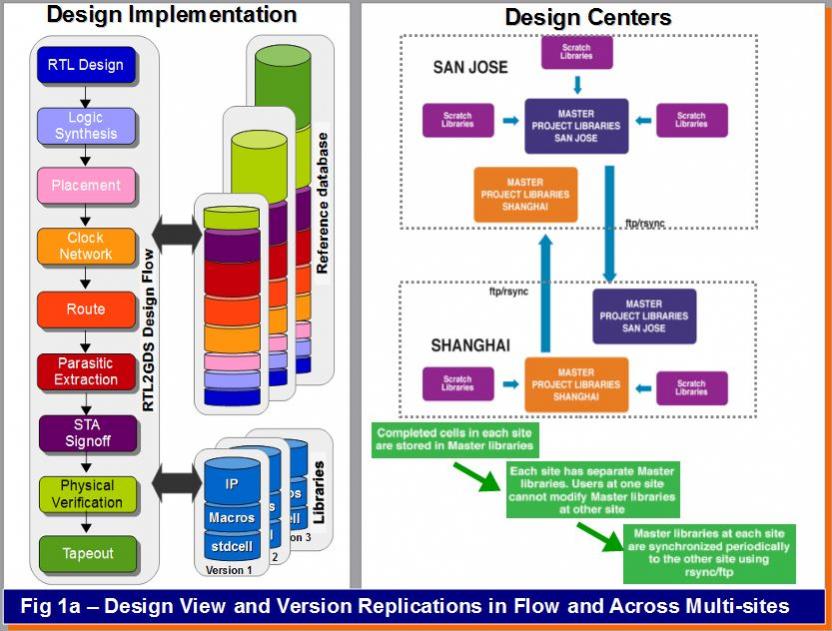 EDA flows and design teams
A typical design flow begins when RTL is developed for a specific design specification and then synthesized to gate level, followed by placement optimization, clocking, routing and parasitic extraction intended for timing signoff. It is common to have many process owners across these implementation stages. Once design development started, each designer tends to copy the entire project data into their workspace and annotated their works to propagate further the design realization closer to layout.

The process gets iterated multiple times, some with smaller loops such as in performing localized placement changes and redoing the route, while others may cover many steps such as doing ECOs, or even may trigger a loop-back to the starting point (for example when upstream input files such as RTL version, tool version or run settings change). During each of these events, more design data get duplicated, ballooning up the design data usage (refer to figure 1a).

Many instances, temporary measures such as local compression with gzip or tarz commands is attempted as designer has limited time to wrestle with the growing design data. This could become a nuisance and still does not prevent data duplication issue. 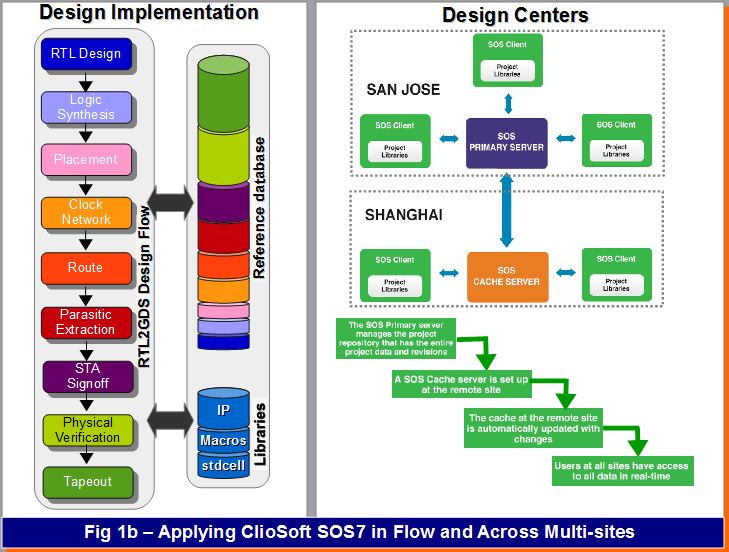 A hardware configuration management solution such as ClioSoft SOS7 resolves some of the issues faced with the ballooning network storage by greatly simplifying access to the real time database and efficiently managing the different revisions of the design data during design development as illustrated in figure 1b.

It enables distributed reference and reuse through the use of primary and cache servers. Both servers provide controls for a comprehensive data management across sites, enabling effective team collaboration by allowing data transparency and reducing data duplications. Any design team has several team members who need constant access to certain parts of the design data. SOS7 enables better automation by providing for the notion of a configuration wherein designers can access the necessary files based on the role they play in the team. While this improves the disk space usage by preventing copying unwanted files, it also adds a layer of security by limiting access to all files. It has seamless integration with many other EDA flows and allows GUI driven customization for designers to browse libraries and design hierarchies, examine the status of cells, and perform revision control operations without leaving the design environment or learning a new interface. 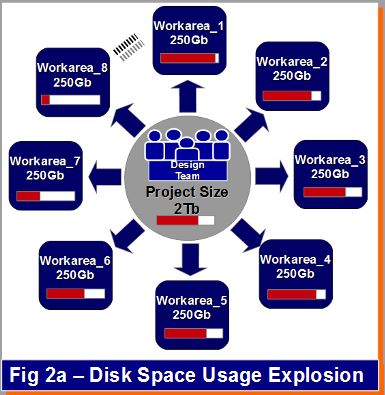 Design development usually starts with one or two shared disk partitions typically ranging from over hundred to 250Gb. Over several project integration snapshots, new additions to the team and several implementation stages, the network storage assigned to the project could easily reach to several terabytes size. At this stage, design teams often resort to segregating team data into cluster of disks such as for front-end, backend, verification –which may address ownership or usage tracking but does not address the main issue of managing the ballooning network storage usage (figure 2a).

Network storage also grows because of the reluctance of the engineers to discard what is perceived as unwanted data. Most data has a lifespan and becomes irrelevant after some time but both project manager and designers tend to retain most of the generated data including those intermediate ones, until a stable results could be achieved.

The cost of maintaining project data footprint is not limited to supporting the given workarea capacity, but also in providing redundant builds by IT for backup purposes. The growing number of physical disk partitions also affects the overall data access performance and IT maintenance efforts as mountable disks recommended threshold could be exceeded.

The solution
ClioSoft’s SOS7 design management platform addresses the issue of managing the ballooning network by using smartlinks-to-cache to link files which have populated the workareas. All directories and files are essentially treated as symbolic links which ensures that the workspace population is fastly accessible and with minimal disk space usage (illustrated in figure 2b, 2c). 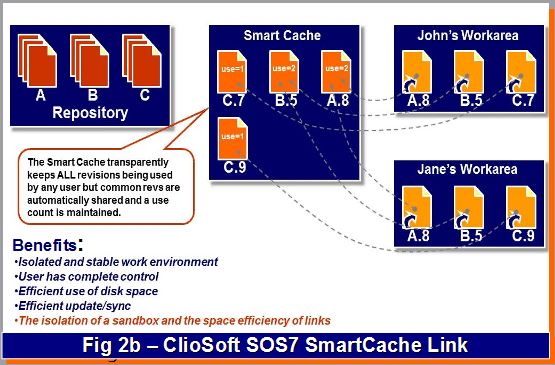 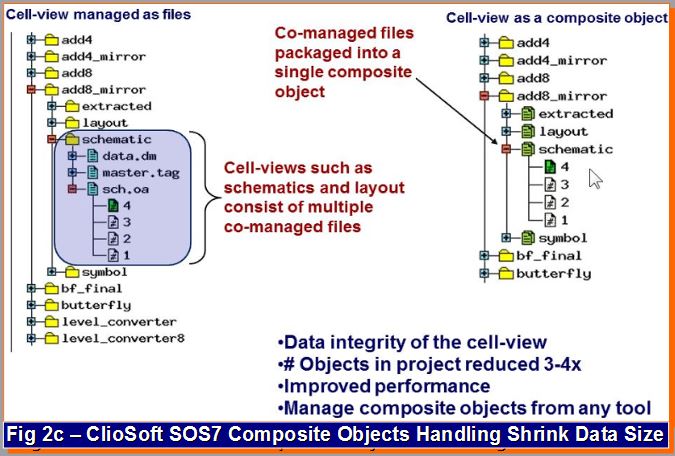 This becomes especially useful when the binaries are large and coupled with a big design hierarchy. It is a key solution metric as other SCM solutions that do not take care of this has to deal with text files –and solutions built on top of these SCMs have to use either hardware solutions or make modifications to the file system to achieve network storage space savings

SOS7 has been architected to ensure high performance between the main server and the remote caches. Any time a user wants to modify the file or a directory, it is quickly dowloaded from the local cache or the main repository with minimal download time. SOS7 also provides for the notion of a composite object which manages a set of files as one entity.

When running the EDA software, a number of files are generated, some of which change with each run. Designers often like to keep the generated data from multiple runs as it enables them to compare the results and revert back to the previous design state if needed. SOS7 manages these files efficiently by treating the generated files as a composite object –without duplicating any files which do not change with each run of the EDA tool– thereby providing the designers with the flexibility they desire and at the same time minimizing the network usage space.

Disk space cost
Measuring disk space costs in dollars per gigabyte only covers half of the equation. One needs to consider additional cost drivers and dispel the common myth about storage total cost of ownership based on total capacity. For example, overhead attributed to reduced capacity due to derating, array-based redundancy and the file system coupled with cost needed for power, cooling and floorspace –all could add between 40-70 percent more on the cost.

Other challenges include the need to provision separate storage systems for data backup. All of these disk capacity demand is becoming prohibitive as limited budget constraint is usually imposed on a project. Hence, resolving network space usage at its root, that is an efficient data creation and management should help ensure adequate project storage capacity and performance.

ClioSoft SOS7 delivers features addressing such a need through enabling design dependencies reuse (such as flexible project partitioning including IP and PDKs), a comprehensive version control mechanisms (such as support to project derivative creation through branching) and previously discussed composite-object referencing.

HCM Is More Than Data Management