It was only back in May of this year that ClioSoft first introduced designHUB, a revolutionary new product that is meant to enable better use of intellectual property (IP) within a company. I wrote a SemiWiki article at the time of the announcement and mentioned it again in a lead-up article to the 54[SUP]th[/SUP] Design Automation Conference (DAC) held in June. The product made its debut at the 54[SUP]th[/SUP] DAC and it appears to have been well received.

I traversed the DAC floor each day and made a point of walking by the ClioSoft booth to see how they were doing and I must say it was busier than most. ClioSoft is an interesting company when it comes to the DAC floor as they work with almost everyone else that has electronic design automation (EDA) product offerings, making them a bit agnostic. The big-3 EDA players all have their followers and you will routinely see large numbers of people milling around their booths. For the smaller EDA players, it’s not so easy and many times you will see their booth traffic as being slow, sometimes with only their sales people standing around talking to each other. This didn’t seem to be the case for ClioSoft this year and one of the reasons for that is the new designHUB product.

ClioSoft gave regular presentations on designHUB throughout the show. They also presented on the new product at the Cadence and Chip Estimate booths each of which also gathered good sized gatherings of onlookers. So, what were they presenting? 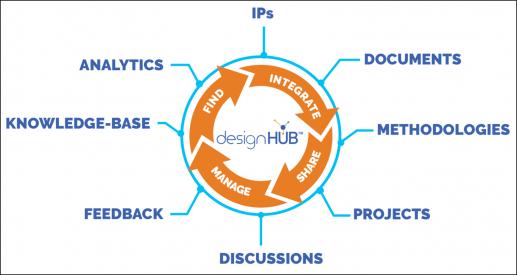 The whole idea of designHUB is to enable companies to access and leverage what ClioSoft calls the ‘Untapped potential of the enterprise’.

Every design company has many IPs, documents, flows, scripts, and ideas that get used once and then put onto the shelf, some never to be used again. This IP represents literally millions of dollars of corporate investment that could and should be leveraged for the benefit of the company, but aren’t because the companies lack an easy way to mine and manage the information. The biggest potential comes from the minds of the companies’ employees, their ideas and their experiences that have been learned over the years. The process for capturing this IP is ad-hoc at best and for the most part non-existent. When the employee leaves, so usually does his experience and knowledge.

ClioSoft attributes the industry’s poor reuse record to several factors. Some of these factors include companies’ inability to share IPs across artificial silos such as different organizational structures and business units as well as having design teams geographically dispersed in different areas and time zones. Reuse of external IP is also encumbered by lack of easy ways to manage 3[SUP]rd[/SUP] party licensing information and 3[SUP]rd[/SUP] party IP usage within a company.

A more complex problem is that much of the value of design IP comes in the form of meta-data. Meta-data in this case is information about the design IP data that helps put things into context. This would include information like the assumptions that went into how the IP is to properly be used. Many times, this data is trapped in emails, meeting minutes, data management systems and issue tracking systems or as mentioned earlier, the minds of the engineers that worked on the IP. 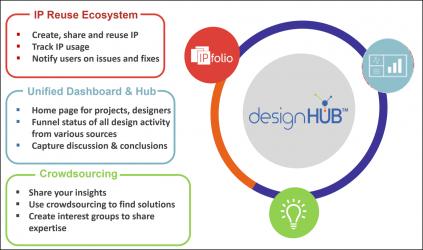 ClioSoft’s designHUB addresses these problems by providing an IP reuse ecosystem that enables designers to create, share and reuse IP. The system acts as a company-wide repository that can be accessed for both design IP-data as well as the all-important IP meta-data that puts the IP into context. This includes information about from where the IP originated, the original purpose and function of the IP, assumptions about IP’s proper use, the IP’s known problems and resolutions, etc.; basically, any information that was captured as the IP was being created and used.

Additionally, designers can use designHUB’s crowdsourcing capabilities to actively interact with other designers, share ideas and insights, discuss interests, do research, and ask questions and get solutions to problems. Once an IP is added to the system, the company can also use designHUB to track the IP’s usage, issues, defects and resolutions and provide feedback that could be useful for future users of the IP.

As mentioned, the beauty of designHUB is that it is design-tool and design-methodology agnostic. So, whether you are an avid user of only one of the big-3 EDA players’ tools or if you have a methodology that mixes and matches several tools from several EDA players, designHUB can help. With increasing design complexities and with the advent of fast moving market opportunities like those presented by the Internet of Things, the need for greater design efficiencies and reuse will be paramount to compete. Good design companies understand this phenomenon and perhaps that’s why ClioSoft’s booth at the 54[SUP]th[/SUP] DAC was so busy when others were not.

Attending DAC in Austin for Free