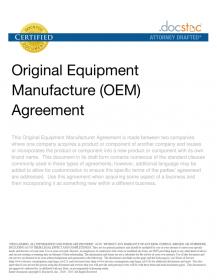 OEM agreements don’t seem to work in EDA. Sometimes they are signed but usually they turn out to be closer to joint marketing agreements. The reason seems to be that EDA software is complex and requires high-touch support especially when getting the product first installed and introduced into a production flow. The effect of this is that if a big EDA company has an OEM agreement with a small company, then the customer knows they will get better supported by working directly with the small company who is more knowledgable about the product and more focused.

Another issue is that big EDA companies typically do large deals on a whole bundle of software for a period of time, typically three years. Nobody really knows how much revenue should really be attributed to which product, not even the customer nor the large EDA company. The methodology I’m familiar with is to use a uniform discount: take the list price for all the products, add them up and then apply a discount percentage to get to the deal size. Then use that discount number to each individual product to allocate the money to different product lines. However, doing business that way doesn’t really work with OEM products that have some sort of royalty or license fee associated with them. A few copies of an OEMed product just complicate the deal. EDA salespeople are notoriously risk-averse since they make most of their money rolling up big deals to sell companies software that they had in the previous deal. So the last thing they want is something that slows down the deal closing. In fact, it is often hard to get them to put their own new products into the deal unless the customer is begging for them because.

A further issue is at the strategic level. Let’s say a big EDA company has a hole in its offering that another company fills and signs an OEM agreement. Either the big company doesn’t sell much in which case why bother, or they sell a lot meaning the hole is really important and they should probably do an acquisition. But now they have to buy back their own revenue, or worse, another big EDA company pays even more and they are back to having a hole again.

The one type of OEM agreement that does seem to work is for components. The one I am most familiar with is Concept Engineering. Many EDA companies need a schematic viewer, that takes the netlist (or the netlist data-structure) and produces an attractive graphical representation with the cells neatly placed and the wires neatly routed. Every EDA company (except Synopsys, who I guess needed a schematic viewer to even develop Design Compiler) uses the viewer from Concept Engineering. We used it at Ambit years ago, and then continued after we were acquired by Cadence. I’ll be surprised if Cadence’s new Genus synthesis tool doesn’t use it still. Concept Engineering has been delivering this technology for 25 years now.

Concept Engineering also sells tools in the StarVision suite based on the same underlying technology. These tools are primarily used by companies importing IP to look at the blocks and gates and transistors to understand the IP quickly to be able to use it in a design or, perhaps, make modifications. But this is a product that those design groups want to get directly from Concept Engineering and its distributors, not through a large EDA company. And so that is what happens. It is almost the perfect exception to prove the rule that OEM agreements only work for components.