Coventor were in Copenhagen Denmark a few weeks ago at the Smart Systems Integration Conference to talk about MEMS and IoT entitled (take a deep breath) Towards a Lego Block Principle for Heterogonous Systems Design Including MEMS and Electronics—Choose and Put Together Fit. Since this seems to have become IoT week for me, without any deliberate plan, this seems very appropriate. After all, “Heterogonous Systems Design Including MEMS and Electronics” screams IoT. And also appropriate is to have the discussion in Copenhagen since Denmark is the home of Lego (in Billund, which is nowhwere near though). Also, Lego have to be one of the few companies that manufacture parts in semiconductor type volumes with a over a half-trillion bricks produced since the company’s founding in 1949. For some reason, Americans pluralize Lego to Legos even though the rest of the world appears not to (the other way around from mathematics which, in England at least, we abbreviate to maths while the US goes with math).

I was talking to someone yesterday, not at Coventor, who was telling me they had a lot of design technology for MEMS very early on and yet, even today, are not really in the market. I pointed out that history is littered with companies who entered some aspect of the MEMS market way too early and flamed out having run out of money. EDA is like that, more companies fail by being too early than too late.

Anyway, MEMS is clearly here now. It is now a multi-billion dollar industry and most of us have, in our pockets, accelerometers, gyroscopes and more inside our phones. Our cars know when they are crashing, our computers can detect they have been dropped, and many of us have a Fitbit band or something equivalent on our wrists (or sitting unused in a drawer at home). So what the somewhat confusing title, the discussion was about why MEMS is different. Why can’t we abstract design and do it in a manner similar to CMOS digital design? What is the equivalent of a transistor in MEMS? And if that approach is not going to work (after all, most digital designers rarely even see a transistor) can’t we at least have a Lego approach similar to how we assemble large SoCs out of blocks of pre-designed IP?

Of course, these days even analog CMOS designers don’t actually care that much about transistors, especially in the FinFET era. EDA tools with PDKs shield designers from such “details” and allow them to focus on functional blocks such as differential pairs, current mirrors, common-source, common-gate and common-drain circuits. So how hard can it be to have a standard MEMS flow?

This is not a new topic. Indeed, as Coventor’s panelist Gunar Lorenz pointed out on his blog entry, this was a topic he had discussed 15 years earlier with his PhD supervisor (and co-panelist) Richard Neul. So has Coventor solved the problem and convinced the MEMS design community that a library-based MEMS design flow is possible or even desirable? Not entirely. As a matter of fact there are MEMS designers who cherish and defend their freedom to draw about any idea which comes to mind in a layout editor without concern for restrictions imposed by a MEMS component library. To those of us with an EDA background this sounds just like the arguments we have had for decades: why can’t analog designers get with the program and automate their work…only even worse.

The introduction to the panel was given by Tobias Maier from Robert Bosch who emphasized the widely felt frustration about the lack of a standard design methodology for MEMS. The essence of the current MEMS design flow (or lack thereof) was nicely captured in a slide by Jörg Doblaski of XFAB, presented earlier in the conference: 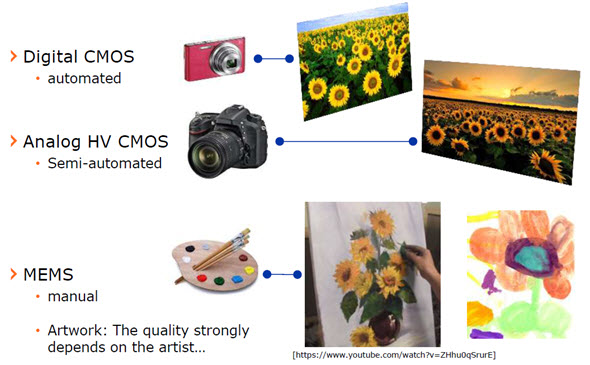 Gunar isn’t exactly a neutral player in this discussion. Starting with his PhD at Robert Bosch and later as lead developer of Coventor’s Architect and MEMS+ software for MEMS design, he has tried to prove that a wide variety of MEMS designs can built up from a library of basic building blocks. No, there is not a single building block such as a transistor in MEMS. But yes, MEMS devices can be assembled from a set of building blocks such as plates, beams, comb drives, electrodes and anchors.

Any ally in the battle was Peter Merz from X-Fab. Foundries hate freehand layouts. Foundries have difficulties with checking designs rules on “freehand” layouts. It’s exceedingly difficult to set up automated DRC’s which in fact are written for MEMS building blocks. Hmm, this starts to sound like analog again!

But Coventor and X-Fab have been working together on all this, and along with Cadence have “conspired” to announce to create the world’s first MEMS-specific design automation enablement based on PDKs. As close to Lego as anyone has presently managed.