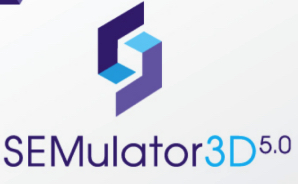 Coventor just rolled out the latest version of SEMulator3D, their virtual fabrication tool. Very conveniently it is SEMICON West this week and they have a booth. I dropped by and got a demo from David Fried, Coventor’s CTO about all the new stuff. He’s very proud of SEMulator3D’s new logo but mostly he is proud of several major improvement in their ability to do virtual fabrication of wafers. The value proposition of SEMulator is that you can avoid the cost and especially the time of running a lot of wafers, especially doing design of experiments (DOE) type work where many wafers need to be run with slightly different parameters. He told me that customers tell him the time is probably the biggest factor since, in practice, in a new fab, not running wafers just means the equipment sits idle and the only saving is in materials so they tend to run wafers of some sort continuously. As we all know, the primary way to get yield up is to run a lot of wafers.

As processes get more complex, and especially get more vertical, we need to model very complex structures such as vertical III-V nanowires, octuple patterning, vertical flash. Doing it the old way, by running experimental wafers is not enough on its own. Cost and development time stretch out and eliminating systematic structural defectivity becomes the key to a successful ramp. But the vertical structures cause problems due to shadowing, complex doping, deep etching and more.

SEMulator3D has always had a module for handling dopants, basically implant and diffusion, but it was inadequate for the types of processes now being created. There is a lot of interaction between the physical structure and the electrical effect of the dopants. The new module handles ion implant, thermal diffusion, doped diffusion, doped epitaxy. It further includes visualization of the dopant concentration gradiants and the dopant-type concentrations, as in the diagram below of a 20nm SRAM. For example, look at the NFETs (top row) where you can see the source/drain implants penetrating, and shadowed by the gate/spacer structure. In the PFETs (bottom row) you can see the Boron (blue) and how it finally diffuses out (the Arsenic in the NFET stays put better due to diffusion properties). 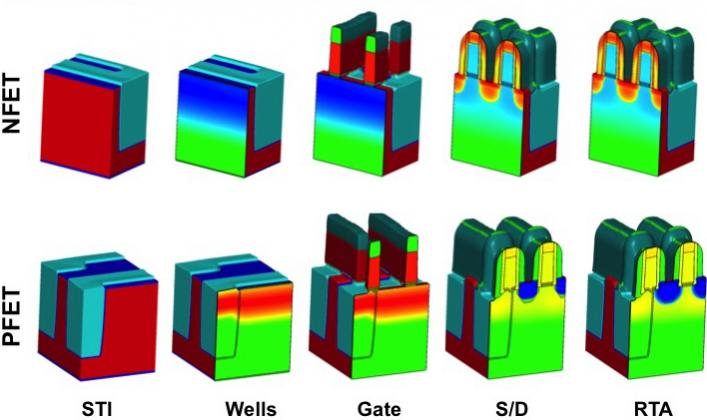 Another new module allows analysis of visibility limitations, such as shadowing and off-axis effects. In some cases these off-axis effects are intentional, such as angled etch (as in the picture on the left below). And sometimes unintentional, such as where on a 300mm wafer the central die my have perfectly vertical etch but near the edge of the wafer there may be few degrees of error (as in the picture on the right). This sort of analysis can be key to high yield at the edge of the wafer. 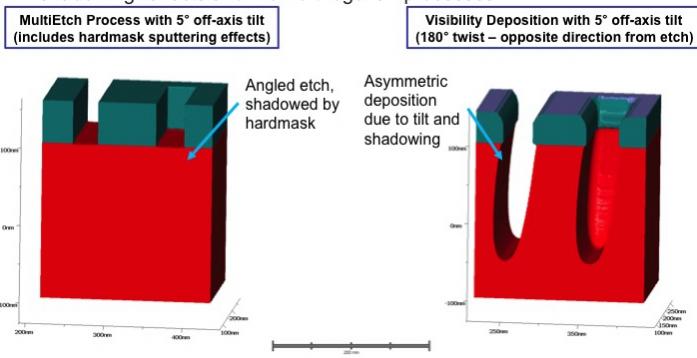 The final big change, other than lots of incremental improvements in user interface, performance and so on, is in being able to link SEMulator3D to other tools. It is the best tool for the type of modeling it does but there is a whole selection of other tools that handle various detailed analysis, typically starting from a mesh of the structure. SEMulator3D has always supported output interfaces, and SEMulator3D 5.0 adds to the library of available modeling platforms. 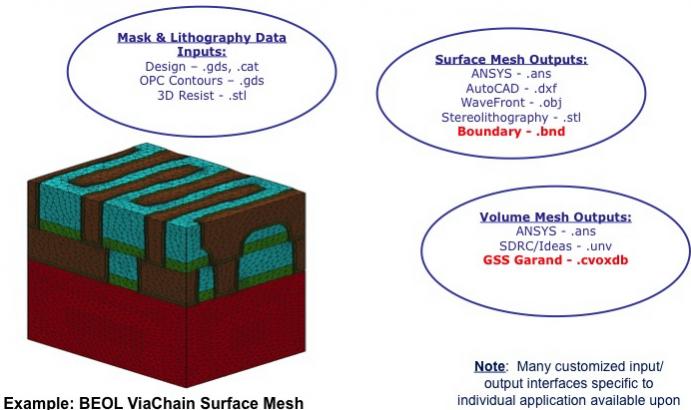 Coventor are at SEMICON West at booth 2531.