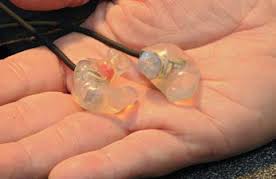 The internet of things (IoT) has a number of key attributes: low power, security, connectivity. But almost every IoT application involves sensors of one sort or another. The visual sensors are built using CCD arrays, they are basically low-resolution cameras, but the mechanical ones are typically built using MEMS technology. These includes things like accelerometers, gyroscopes, compasses and even microphones.

For example, a multi-axis accelerometer, along with some clever signal processing software, can count your paces, tell whether you are walking, running or cycling and more. Smartwatches and more limited function Fitbit-like devices use this to track your activity. Before smartphones, one of the main drivers of MEMS accelerometers was their use in automotive sensors for airbag deployment. Also, filters for smartphones which are built using MEMS techniques despite having no moving parts.

They are also used to measure the G-forces in racing crashes. For example, since 2002, the radio earpieces used in INDYCAR racing also contain a 3-axis accelerometer that is used to measure the effect on the driver’s head in an impact. The data is streamed to a 90-second buffer in the car’s black box. One big attraction of MEMS is that the devices are physically small and light. There is not a lot of spare room inside a smartphone and even less inside an INDYCAR driver’s communication earpiece. The NFL had been doing something similar on a voluntary basis (with the accelerometers in the helmet, players are banned from wearing earpieces) but the program has been suspended for now.

MEMS stands for Micro ElectroMechanical Systems. In practice what this means is building very small mechanical systems using semiconductor manufacturing techniques. Sometimes the MEMS devices are constructed standalone but sometimes the electronics is integrated onto the same substrate. Today MEMS is an $11B business with double-digit growth forecast to reach $21B in 2020.

During SEMICON West there was a MEMS panel sesssion. The entire theatre was full with many rows of people standing behind the chairs (and me behind them). There is a lot of interest in MEMS for IoT.

One challenge in the MEMS market is that there hasn’t really been anything new recently. If you look at the legend to the graph above then every product segment was invented years ago. If the forecast of 50B IoT devices by 2020 is even approximately real, then this will drive volume in the MEMS market even without new product segments. But with many suppliers in each segment it is hard to have true product differentiation. It is important that MEMS devices are quick and easy to design so that they can perfectly be matched to their markets.

One attractive area of future potential growth is medical devices. Implantable (or in your contact lens) glucose sensors and other bio-medical sensors have the possibility of revolutionizing various aspects of medical care. Instead of measuring your blood pressure once in a blue moon when you visit a physician, it could be monitored continuously. Or your heart EEG. I believe that something like this will prove to be the killer app (or rather the keep-you-alive app) that will make us all wear a smartwatch; just getting our text messages on our wrist is not enough.

Historically MEMS devices have been built in specialized foundries and often each device required its own tweaks to the process. But the design and manufacture is becoming more standardized. This is similar to what has happened in IC process technology, where custom processes that used to be common are now vanishingly rare.

However, it is not just manufacturing that is becoming more standardized, the methodologies by which they are designed are too. Coventor was not on the panel session, although by coincidence their booth was only about 20 feet away. MEMS designers generally use two separate approaches to predicting the multi-physics behavior of their device designs. Either highly simplified, hand-crafted models or computationally slow finite-element analysis (FEA). While each of these approaches has merit, neither approach can accurately predict the dynamic behavior of the entire device while taking full account of multi-physics coupling effects. As a result, MEMS designers have historically resorted to expensive and time-consuming prototyping on real silicon. Coventor’s MEMS+ is a different kind of FEA, based on a unique MEMS-specific library of high-order, parametric finite elements. These elements provide the accuracy and generality of FEA and the simulation speed of hand-crafted models. Because MEMS+ models run extremely fast compared to conventional FEA, designers can simulate their entire MEMS device, including gas damping effects and control circuitry. This approach is leading to a more standardized approach to MEMS design. What is really required is the equivalent of a PDK in the IC design world, a kit of pre-defined and pre-characterized basic structures out of which real MEMS devices can be created.

Earlier this year Coventor did a webinar (along with ARM and Cadence) Addressing Smart Sensor Design for SoCs and IoT. One of the topics covered was how to create a mechanical MEMS component in Coventor’s MEMS+ environment. You can watch a replay of the webinar here.

0 Replies to “The Internet of Sensors”