FPGA’s have played an important role in the fabless semiconductor ecosystem which is why it has a full chapter in our book Fabless: The Transformation of the Semiconductor Industry. Along my career path I spent time at a start-up FPGA so I know how hard it is. I worked for GateField which was then acquired by FPGA pioneer Actel which was then acquired by MicroSemi. There are still GateField people at Microsemi and the architecture they developed is still in play so congratulations to them.

Intel acquiring Altera was a big blow to the mainstream FPGA industry which left me wondering who will step up and compete with Xilinx. As it turns out the answer is Achronix:

“2017 is a breakout growth year, which establishes Achronix as one of the fastest growing semiconductor companies in the world. We are experiencing strong customer demand for both our Speedster FPGAs as well as our newer Speedcore embedded FPGA in hardware accelerator applications. We are looking for new talent to complement a very strong core team to continue delivering highly innovative silicon and software products,” said Robert Blake, President and CEO, Achronix Semiconductor.

Honestly I was blown away by the numbers since I have known Achronix since they appeared on SemiWiki in April of 2011:Wanted: FPGA start-up! …Dead or Alive?

Coincidentally, I happen to know the Achronix VP of Marketing, Steve Mensor. Steve spent most of his career at Altera with another good friend of mine so that is how we are connected. I had a quick phone chat with Steve about this press release and found out Achronix will be at DAC next week for the first time so we will speak more then and dig into the technology for follow-up blogs. He did share a slide deck with me and I have to say I was impressed.

Steve’s presentation hit on two very hot topics in the semiconductor industry and that is embedded FPGAs and hardware acceleration (think artificial intelligence). SemiWiki’s readership was fairly predictable until IoT hit us in 2014. Now we have a very diverse readership from many domains I don’t recognize. We are seeing the same thing with AI as it touches almost all of the markets we cover including Mobile, IoT, Automotive, and Security.

According to Steve, in addition to Speedster standalone FPGAs and Speedcore eFPGAs they are working on a new product they call Chiplets which is a die for 2.5D package integration.

If you are attending #54DAC next week you can meet Steve and the Achronix team at booth #1821 which is across the aisle from SMIC.

About Achronix Semiconductor Corporation
Achronix is a privately held, fabless semiconductor corporation based in Santa Clara, California. The Company developed its FPGA technology which is the basis of the Speedster22i FPGAs and Speedcore eFPGA technology. All Achronix FPGA products are supported by its ACE design tools that include integrated support for Synopsys (NASDAQ:SNPS) Synplify Pro. The company has sales offices and representatives in the United States, Europe, and China, and has a research and design office in Bangalore, India. Find out more at https://www.achronix.com.

8 Replies to “The FPGA Business Just Got Interesting Again!” 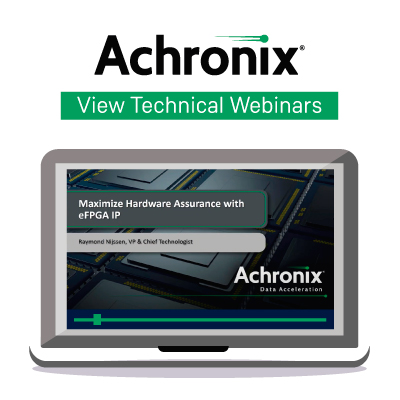