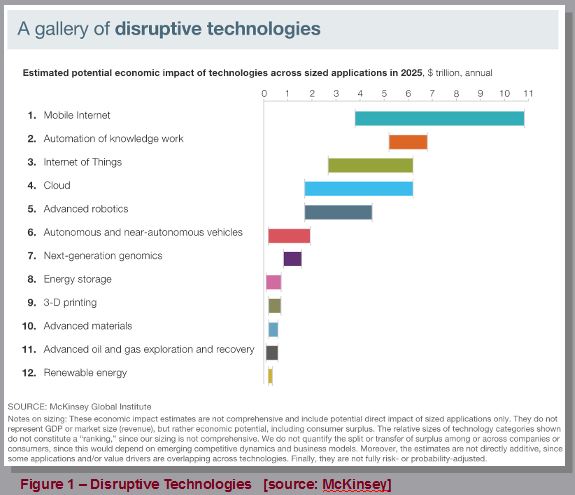 The semiconductor industry has gone through several major transitions driven by different dynamics such as shift in business models (fab-centric to fab-less), product segmentation (system design house, IP developers) and end market applications (PC to cloud; and recently, to both automotive and Internet of Things — IOT’s, or Internet of Everythings – IOE’s).

According to the management consulting firm McKinsey, seven out of twelve technology disruptors (from mobile internet to 3-D printing) collectively would leave an economic imprint of $16 trillions on the lower end, and up to $37 trillions by 2025 (Figure 1). We have seen many assessments given by various industry observers as how digital technology has injected momentum and is often found in many cross-paths of the current change spaces. One such confirmation was given by a Silicon Valley luminary Jim Hogan, who had categorized our current shift into a Cognitive Era or the Industrial Revolution 4.0, as illustrated in Figure 2. The 4[SUP]th[/SUP]revolution — after agriculture (or if one would argue a pre-agriculture/hunting era should be part of the starting point, it was not being counted here), mechanical, electrical and electronics – being driven by digital technology. 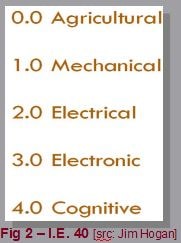 What about the impact on the semiconductor industry and Electronic Design Automation (EDA) in particular? In order to measure the monetization scale of this digital economy, we could assess the recent revenues generated by its key players. Based on data gathered by ICInsight, the estimated overall IC sales footprint is reported to top $100Billions, with the top-ten companies accounted for almost 75% of the total figure (refer to Figure 3). 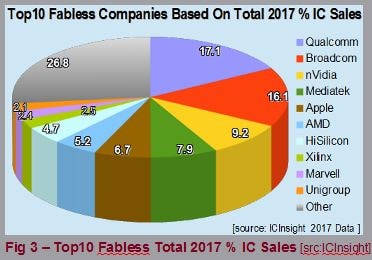 To gain better visibility on how the above numbers correlate to the electronics industry in general and EDA space in particular, we could glean into the market dichotomy captured by Synopsys, labeled as a global value chain (shown in Figure 4a). In the EDA & IP space, the total 2017 annual revenues amounted to $10.3B.

Diving one step deeper, we could see that the top four EDA companies (Synopsys, Cadence, Mentor, Ansys) have contributed to about 68% of the total estimated revenue space. In the comparison, Mentor revenue valuation was based on taking the Siemens’ Digital Factory (in which business segment Mentor is in) revenues over 2017 and substracting the contribution from pre-acquisition revenue in this segment, plus its corresponding constant 4-5% quarterly growth, then converted into US$ based on 12/31/17 conversion rate (Figure 4b). As a side note, Mentor estimated FY17 figure given during pre-acquisition date was $1.283B. 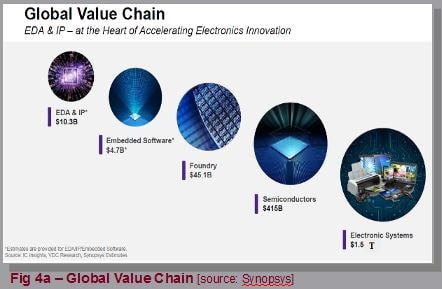 To gauge the amount of spending usually allocated for EDA/IP acquisition, we could look at the change in spending from last two years (2017 vs 2016) of the semiconductor companies. Based on ICInsight report, with the exception of two players in the top-ten (i.e., Qualcomm,Toshiba), there was an increase of 6% in collective spending, i.e.,$35.9B vs $34B in 2016. 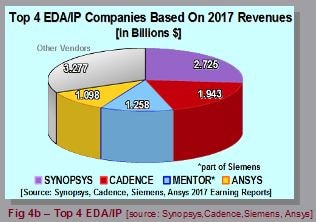 Getting a top-down view in the global chain, during 2017, the global electronics systems market grown by 2%, semiconductor segment by 15% and EDA experienced an average 9% growth. From the EDA standpoint, based on their earning reports, the anticipated 2018 growth of the big-four are 7% on the average (the range is 5 to 8%).

Recently, numerous blogs had captured the potential contribution of Artificial Intelligence (AI) and in particular, Machine Learning (ML) across all segments dealing with data. In the early days of Internet roll-out, in which web browser was a luxury, we were accustomed to the pull technology to get data from centralized mainframes. Subsequently a push technology was becoming mainstream, coupled with more distributed computing resources.

Nowadays, data will be increasingly streamed in both directions, potentially with constant monitoring, plus some analytics and being shaped over time. It is fair to anticipate AI and ML projected impacts related to these aspects:

All of these are positive drivers to a healthy demand in both semiconductor and EDA spaces. Despite a single digit growth projection in EDA this year, it is an expanding market size, which offers a growth continuum.

2 Replies to “EDA and Semiconductor — Is There Growth In The Ecosystem?”