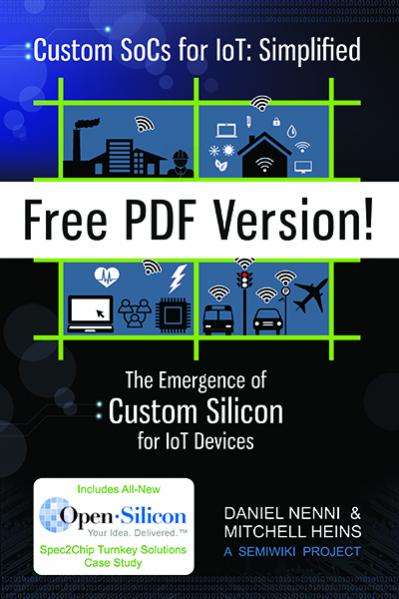 Two important trends will be discussed in this book: The disruptive nature of the Internet of Things and the use of the ASIC business model by systems companies to get into the chip business.

Disruptive technology has been an integral part of life at least since the electrical telegraph in the 1700s. My Grandfather, whose lifespan touched three centuries, always marveled at the ice machine in his refrigerator’s door, since he delivered ice blocks when he was growing up. Even though he experienced the automobile, air travel, and the beginning of military technology (he was a medic in WWI), the ice machine was always his favorite “gadget.” My favorite will probably always be the smartphone because it is the Swiss Army Knife of gadgets.

The big difference between IoT and everyone’s favorite gadget is that in the next ten years IoT will touch EVERY gadget in our lives. The Industrial Internet of Things is leading the way with smart buildings, factories, and farms and a very clear return on investment (ROI) as a driver. Smart (autonomous) transportation such as cars, trucks, airplanes, ships, and drones are a close second. Consumer IoT featuring smart home devices and wearables are a distant third because the ROI is not always as clear. Moreover, of course, security is a big IoT market segment in itself and will also touch many other IoT devices as well.

According to Masayoshi Son, Chairman and CEO of SoftBank Group Corp, and Chairman of Arm Holdings, more than one trillion IoT devices will be built between 2017 and 2035. Even more interesting, the market for IoT devices and related services could be worth a staggering one trillion dollars per year by 2035. Clearly, systems companies are in the best position to win this market as long as they can make their own IoT chips and that is where the tried and true ASIC business model comes back into play.

Even today the ASIC business is a multibillion-dollar market, and the annual growth rate is increasing rapidly as non-traditional chip companies are getting into the semiconductor design business. Additionally, the make-versus-buy chip decision continues to get easier with very cost effective commercial IP and turnkey ASIC providers like Open-Silicon.

If you look at the product offerings of the top three EDA companies (Synopsys, Cadence, and Mentor), the transition from chip to the system level design is clear. As a result, the sources of EDA revenues are now dominated by non-traditional chip companies that are following Apple’s lead. The pure-play foundry business is also experiencing a surge with Apple providing close to 20% of TSMC’s annual revenue in 2017.

In the second half of the book, we discuss exactly what it takes to go from specification to chip using the Open-Silicon Spec2Chip Turnkey Solution. Open-Silicon has worked with more than 150 semiconductor and systems companies (large and small) completing more than 300 designs and shipping more than 130 million ASICs, which is why we chose them to partner with us for this book, absolutely.