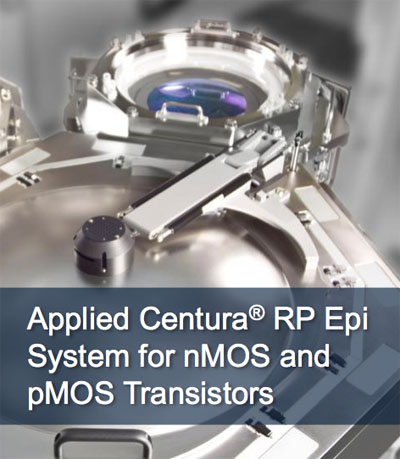 At Semicon I met with Applied Materials to learn about epitaxy. This is when a monocrystalline film is grown on the substrate which takes on a lattice structure that matches the substrate. It forms a high purity starting point for building a transistor and is also the basis of the strain engineering in a modern process.

Basically, the source and drain are etched out to form a pit and then the pit is filled by depositing epitaxial silicon (with Applied Materials equipment in most cases). It is actually deposited until the source/drain is proud of the surrounding silicon. Adding small amounts of impurities that are larger than silicon, such as germanium, during deposition induces strain in the lattice which turns out to enhance mobility in the channel. It increases transistor speed but does so, unlike many other things we might do, without increasing leakage and so without increasing static power.

But now, at 22/20nm nodes, epitaxy is needed to get extra performance out of the n-type transistors too, an contribution of around 20% of the mobility.

There are several advantages of epitaxy especially when it is used for both transistor types:

Applied are the leader in equipment for epitaxy having shipped over 500 systems (and more every week). Their revenue in this area increased by 80% over the last 5 years. Looking forward, the market is moving towards new channel materials such as III-V elements which have inherently higher electron mobility.

The bottom line message: nMOS epitaxy is essential for faster transistors inside next-generation mobile processors. It boosts transistor speed by the equivalent of have a device node without increasing off-state power consumption. What’s not to like? That is why it is coming to a 20/22nm process near you.