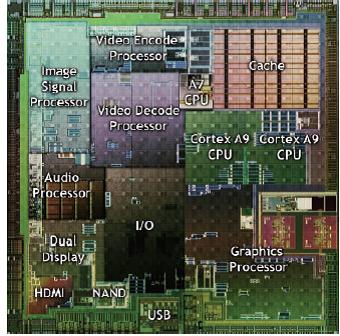 This news announced two weeks ago is not really good news for those expecting to see this new generation of computers, running Windows RT OS and no more based on x86 processor but on ARM CPU core, coming on the market. The reason invoked by Toshiba was “delays in getting adequate supplies of components” and, even if Toshiba did not specifically mention the guilty supplier, it appears that the computer was based on OMAP platform from Texas Instruments, the chip being manufactured on TSMC 28nm technology. Let’s make it clear from the beginning, this blog is not aiming at putting shame on a specific and respected chip maker like TI, neither on the largest and well respected Silicon foundry (TSMC), but rather to bring my point of view about the probably needed evolution in the Foundry/Fabless/Fab-lite equation.

At one extremity of the SC landscape, we find Intel, still undisputed leader with $54 billion revenue in 2011, being the perfect Integrated Device Manufacturer (IDM) example. That means that Intel manufacture in the company wafer fab the IC designed by Intel engineers and, by the way, using the CPU core 100% owned by the company, the x86 family. At the other extremity, we find the many “fabless” companies, which can be small start-up –in this case the fabless business model is the only way to start a SC company, due to the huge cost ($5 billion) and long delays (3 years minimum) you need to build a fab to manufacture in advanced technology nodes like 28 or 22nm- but also companies reaching revenue level of several $ billion, a well known example being Qualcomm (the company has never built any fab), but also AMD (CEO and founder Jerry sanders use to say in the 70’s that “real men have fabs”) since the company has sold the fabs to a consortium creating GlobalFoundries. In this case, the picture is crystal clear, you own a wafer fab to manufacture your chips or not.

But, since the late 1990’s, the “fab-lite” concept has appeared, mainly due to the already high cost associated with the development of new technology and wafer fab equipment, very capital hungry; mainly, but not only, as the other reason is an economic theory which consider that a company should focus on core business. This theory works well for companies who have so much diversified their products that they can’t invest in every product line enough cash to be part of the leaders, this lack of leadership leading to poor capital ROI or even bankrupt. But that we are seeing these days, the Qualcomm, TI or Nvidia being unable to supply IC in 28nm at the level demanded by their customers, is showing the limits of this “MBA type” of thinking.

What can be worse than not being able to supply your flagship product (this one developed in the most aggressive technology node), offering you the best gross Profit Margin (GPM) and to your customers the best supported feature list at the lowest price and lower power consumption?

Because we are working in a fast moving industry, the first reaction have raised quickly. One option is proposed by Mike Noonen, Executive Vice President, Worldwide Marketing and Sales, for GLOBALFOUNDRIES:

“There are warning signs, both technical and economic, emerging in the foundry business that warrant our attention, and in fact require a re-thinking of how best to apply our resources and energy. The solution, ironically, may be a move toward a more IDM-like model. Strategic collaboration that creates a ‘virtual IDM-like interface’ to chip design companies will help further close the gap between process teams at the manufacturing companies and design teams at the fabless companies. Collaboration – early, often and deep – is really the only practical approach given the cost and complexities involved.”

Mike Noonen is Executive Vice President, Worldwide Marketing and Sales, for GLOBALFOUNDRIES. In this role, he is responsible for global customer relationships as well as all marketing, sales, customer engineering and quality functions.You can find his blog on GFI or ARMweb site.

This is not the only option, and I consider we should also think to another solution, which is for a fab-lite company to carefully select which product to fab outside. This remind me a meeting I had in 2005 in Shanghai with one of the SMIC Director, who share with me how this pretty young foundry did to grow so fast. At that time, SMIC business model was to build fabs, using their customer money, and manufacture the mature products for the TI and Motorola, so probably on 250 or 180nm at that time. We could imagine that the IDM going Fab-lite decide that their core business should include wafer fab, as far as these will be used to manufacture their flagship products, most often in the most advanced technology nodes. This should not prevent them to work with foundries, either for mature products, either to add extra capacity on these flagship products when the market demand is passing a certain level, or even to get better cost from foundries…

The risk is to stay in current situation, and not taking any of these decisions. Risk for these pure fabless or fab-lite IDM to miss the market window on high runner SoC for smartphone or media tablet, and get weaker, and risk also for us, the consumer, the be locked to Intel processor based only solution, when we see the opportunity to buy ARM based media tablet running on Windows RT operating system vanishing, because of wafer fab capacity issue.