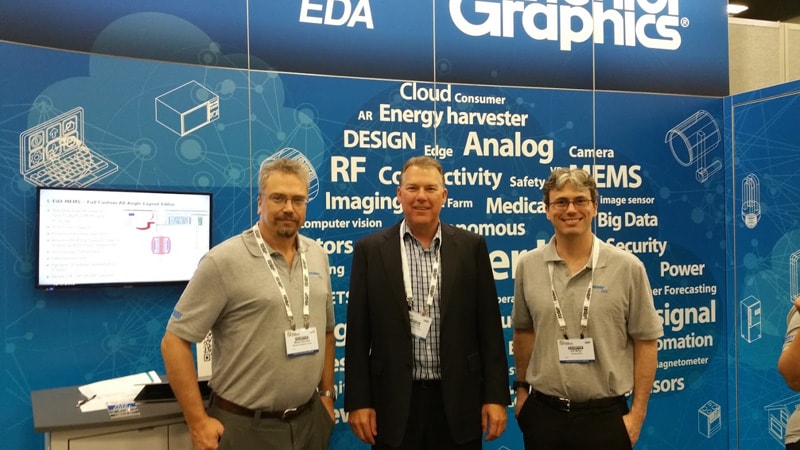 Most mergers and acquisitions in the EDA world simply don’t work out financially a year or two after the deal is done, however I was pleasantly surprised to learn that Tanner EDA is doing quite well at #53DAC this year after the acquisition by Mentor Graphics back in March 2015. Everyone that I’ve been meeting with at Tanner EDA for several years now is still around, and in fact they are in growth mode. This year at DAC they had two announcements that should delight both IC designers and IoT designers. Tanner EDA even had their own booth at DAC, separate from the Mentor booth.

IC Designers
Running DRC and LVS within the Tanner EDA tools has always been easy to do, but you would typically also have to run the industry standard Calibre tool for sign off. Now, there’s a special version of Calibre just for Tanner EDA users, and they dubbed it Calibre One. No more importing of Calibre design rules and running two different DRC/LVS tools, now you can add-on the Calibre One to your existing L-Edit tool from Tanner EDA.

This integration is lower-priced than a full seat of Calibre, so it should be easier on the wallet. Even the licensing within Tanner EDA tools now uses the industry-standard FlexLM, so it’s a bit easier for your CAD group to get all the tools up and running from a centralized license file.

So the name Calibre One refers to the idea that one user can access the tool, running on one CPU, which is a perfect fit for the typical AMS designs done with Tanner. Calibre One includes all four tools:

IoT Designers
Many IoT chip designs require a processor, sensors, actuators and a way to model everything quickly and simply before production. In this second announcement we have Tanner EDA partnering with the leading processor IP company, ARM, on their Cortex M0 core. ARM calls this their DesignStart program, and it makes it easier for IoT designers to get their products designed and verified on time, and within budget. To make the deal even sweeter, they’re offering the complete IC design tool suite and IP for a reference design at no cost. Once you’ve proven your concept, then you can buy a fast-track license for commercial use.

With this Tanner design flow you can create IoT designs with digital, Cortex M0, analog, AMS and MEMS in an integrated environment. For your free reference design you actually use a web-based virtual lab to use the design tools.

Summary
Tanner EDA is on a roll, and they are still an affordable EDA vendor for you to consider on designs for AMS, MEMS and AMS. Now with the new Calibre One and ARM DesignStart program announcements they are opening up their tools for broader adoption. Give Massimo, Greg or Jeff a call and find out how to take the next step.

0 Replies to “Two New Announcements from Tanner EDA at #53DAC”