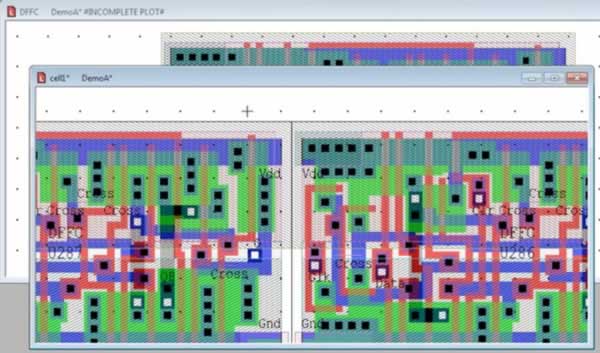 Advanced skill in auto repair, carpentry, plumbing, and similar trades often correlates to one factor. Knowing what you want to do is one thing – having the proper tool is another, and can make the difference. Many a job has extended from minutes to hours over the lack of the right tool at the right moment. Experienced mechanics and contractors acquire and maintain tools in a toolbox, some used daily, some used occasionally, but all very valuable in earning a living.

An EDA “tool” are often comparable to a toolbox, containing many different implements with various uses. In an EDA toolbox, there may be many items a user is unaware of, or unfamiliar with. Most designers develop a basic level of proficiency quickly by using a percentage of the tools, but real productivity depends on exploiting the entire set of items at their disposal.

Tanner EDA has a toolbox for analog, MEMS, and mixed signal design: L-Edit. As the name implies, L-Edit does layout editing, and includes more capability that is powerful. Some of the notable features: Schematic Driven Layout (SDL), which can take netlists from T-Spice and other tools; interactive design rule checking (DRC) that shows violations in real-time while editing; and node highlighting, which allows connectivity visualization displaying all geometry connected to a point based on connectivity rules.

Most EDA companies offer training to help familiarize users. Tanner EDA recently hosted a webinar with an application engineer walking through his inside view of L-Edit and situations designers can leverage.

This webinar is for the intermediate L-Edit user, or a designer using competitive analog layout tools and considering switching to Tanner EDA. It is not intended to be a tutorial on analog design, but rather focuses on illustrating tasks an analog designer typically performs while capturing designs in a layout tool, and how to configure and use L-Edit to accomplish those. During the narrative, host Thuong U is constantly showing menu selections and pointing out keyboard shortcuts.

As with most modern computer-aided layout tools, perhaps inspired by Adobe Creative Cloud and others, L-Edit makes use of aerial toolbars. These aerial toolbars can be docked, resized, hidden, pinned, and otherwise manipulated on-screen to fit user preference. Thuong begins the session showing his preferred screen layout, starting with a pair of DFFC instances. He shows several situations using align, distribute, and snap-to-grid, including how to quickly select the proper objects. He then moves into creating, rotating, and reflecting polygons, differentiating how base points are used to place and pivot objects.

Thuong then moves into Boolean operations. These can work on individual objects or an entire design. His example shows combining shapes into a single element, much faster and more effective than trying to draw some complex shapes manually. He then shows how layers work, and controls visibility over how details shown using a TAB key while moving a cell. As an example of DRC, he moves a polygon into a DFFC, with a minimum distance violation prevented unless a connection is intended. He then filters layers, for example showing only poly, active, or metal. Layer visibility can be stored in a layer setup. Thuong then tackles one of the more challenging tasks: establishing vias, using templates and adding features like guard rings.

One of the powerful features in L-Edit is T-cells, allowing parameterization. This is handy for device generation, such as capacitors, concentric rings, or other items than can be described mathematically. Another power-user feature is layout versus layout, a sophisticated visual “diff” that can quickly spot areas that have been changed or added between selections. Thuong closes with a short Q&A, addressing questions such as how to add an image (like a logo) to a layout.

L-Edit users will likely derive a lot of benefit from this webinar, for some tips that might make a big difference in achieving layouts faster.