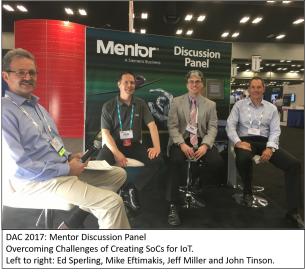 As the Internet of Things (IoT) opportunities continues to expand, companies are working hard to bring System-on-Chip (SoC) solutions to market in the hopes of garnering market share and revenue. However, it’s not as easy as it may first seem. Companies are running into a series of issues that stand between them and capturing the market.

I had the chance to sit in on a panel session at the 54[SUP]th[/SUP] Design Automation Conference (DAC) that tried to address how companies can overcome these challenges. The panel was chaired by Ed Sperling of Semiconductor Engineering and was held at the Mentor booth on the DAC exhibit floor. On the panel were Mike Eftimakis from ARM, Jeff Miller from the Mentor Tanner group and John Tinson of Sondrel. Ed started off the discussion asking the panelists what they felt the main challenges were for IoT SoC designers.