Dan and Mike are joined by industry luminary Jim Hogan. In a rare interview, Jim talks about his life – how he got into semiconductors, EDA and venture investing. Jim’s time at Cadence as well as his work at ARM are explored. Jim also provides a concise and informative overview of how venture investing works. The podcast… Read More

Synopsys is Extending CXL Applications with New IP
by Mike Gianfagna on 12-17-2020 at 10:00 am
View Profile
View Forum Posts

Compute Express Link (CXL), a new open interconnect standard, targets intensive workloads for CPUs and purpose-built accelerators where efficient, coherent memory access between a host and device is required. A consortium to enable this new standard is in place, and a lot of heavy hitters are behind the standard, including … Read More 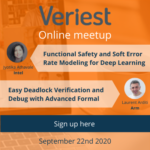 Veriest is headquartered in Israel with engineering sites in Serbia & Hungary. The team has accumulated a wealth of experience through involvement in projects in the forefront of semiconductor technology.

Veriest maintains unrivaled quality standards in terms of both service and knowledge. With the ability to take on … Read More

Over the past few weeks, there have been numerous reports about Nvidia’s overtures to acquire Arm. The news has mostly been obsessed about the $31 billion that Arm’s current owner, Softbank, paid for Arm and whether Nvidia could pay such an eye-watering price to buy this asset. There is also pushback from Herman Hauser who was one… Read More

China’s Position in the Global Semiconductor Value Chain
by Bart van Hezewijk on 05-25-2020 at 6:00 am
View Profile
View Forum Posts

There is an adage that says that quality is not something that can be slapped on at the end of the design or manufacturing process. Ensuring quality requires careful thought throughout development and production. Arguably this adage is more applicable to the topic of Design for Test (DFT) than almost any other area of IC development… Read More

It’s amazing to think that Apollo moon mission used computers that were based on magnetic core memories. Of course, CMOS memories superseded them rapidly. However, over the decades since, memory technologies have advanced significantly, in terms of density, power and new types of technologies, e.g NAND Flash. Ever since the… Read More