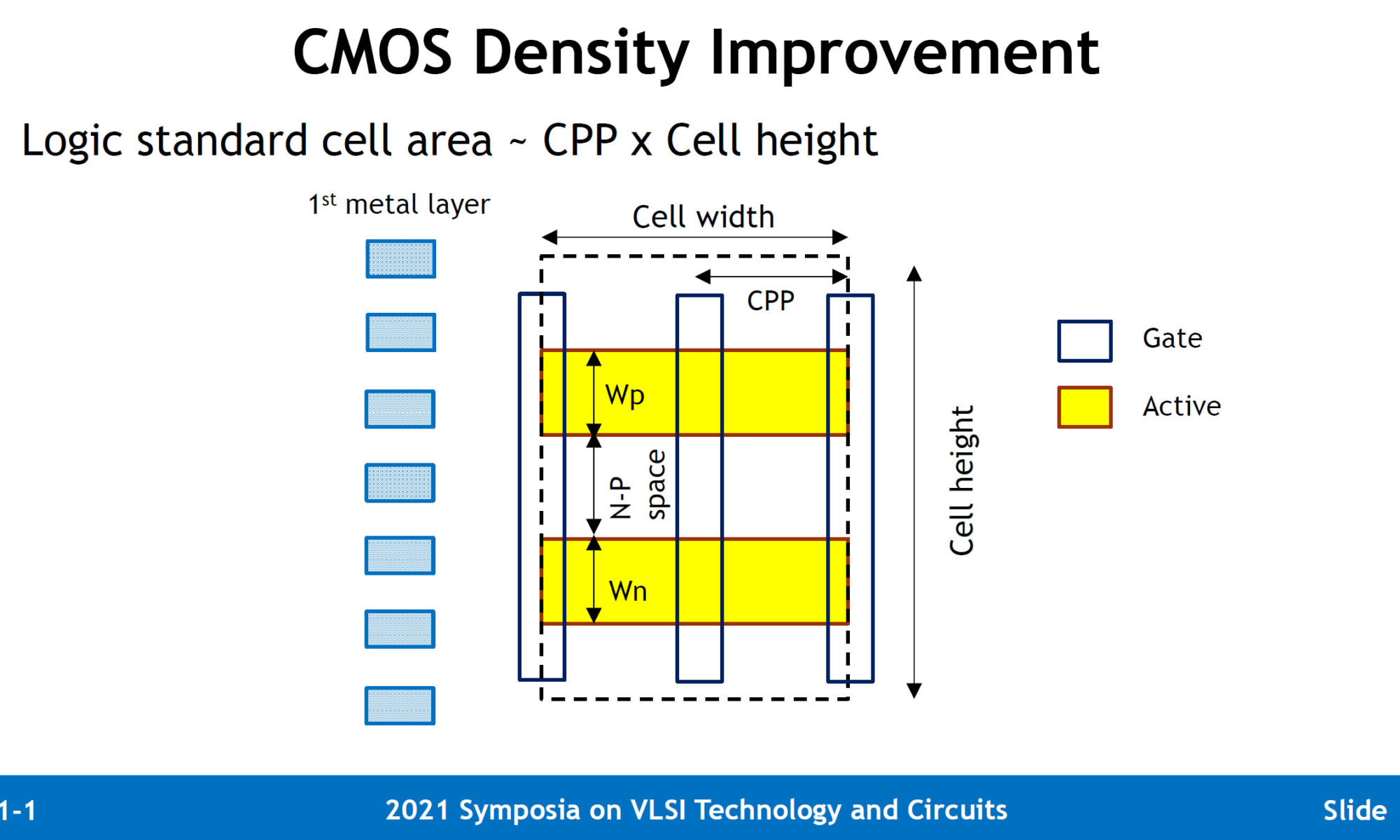 VLSI Symposium – TSMC and Imec on Advanced Process and Devices Technology Toward 2nm
by Scotten Jones on 07-02-2021 at 6:00 am
View Profile
View Forum Posts

At the 2021 Symposium on VLSI Technology and Circuits in June a short course was held on “Advanced Process and Devices Technology Toward 2nm-CMOS and Emerging Memory”. In this article I will review the first two presentations covering leading edge logic devices. The two presentations are complementary and provide and excellent overview of the likely evolution of logic technology.

CMOS Device Technology for the Next Decade, Jin Cai, TSMC

Adding more gates such as in a FinFET where the channel is constrained between three gates yields the ability to scale Lg to approximately 2.5 times the thickness of the channel. FinFETs have evolved from Intel’s initial 22nm process with highly sloped fin walls to todays more vertical walls and TSMC’s high mobility channel FinFET implemented for their 5nm process.

As the height of a standard cell is reduced the number of fins per device has to be reduced (fin depopulation), see figure 2. 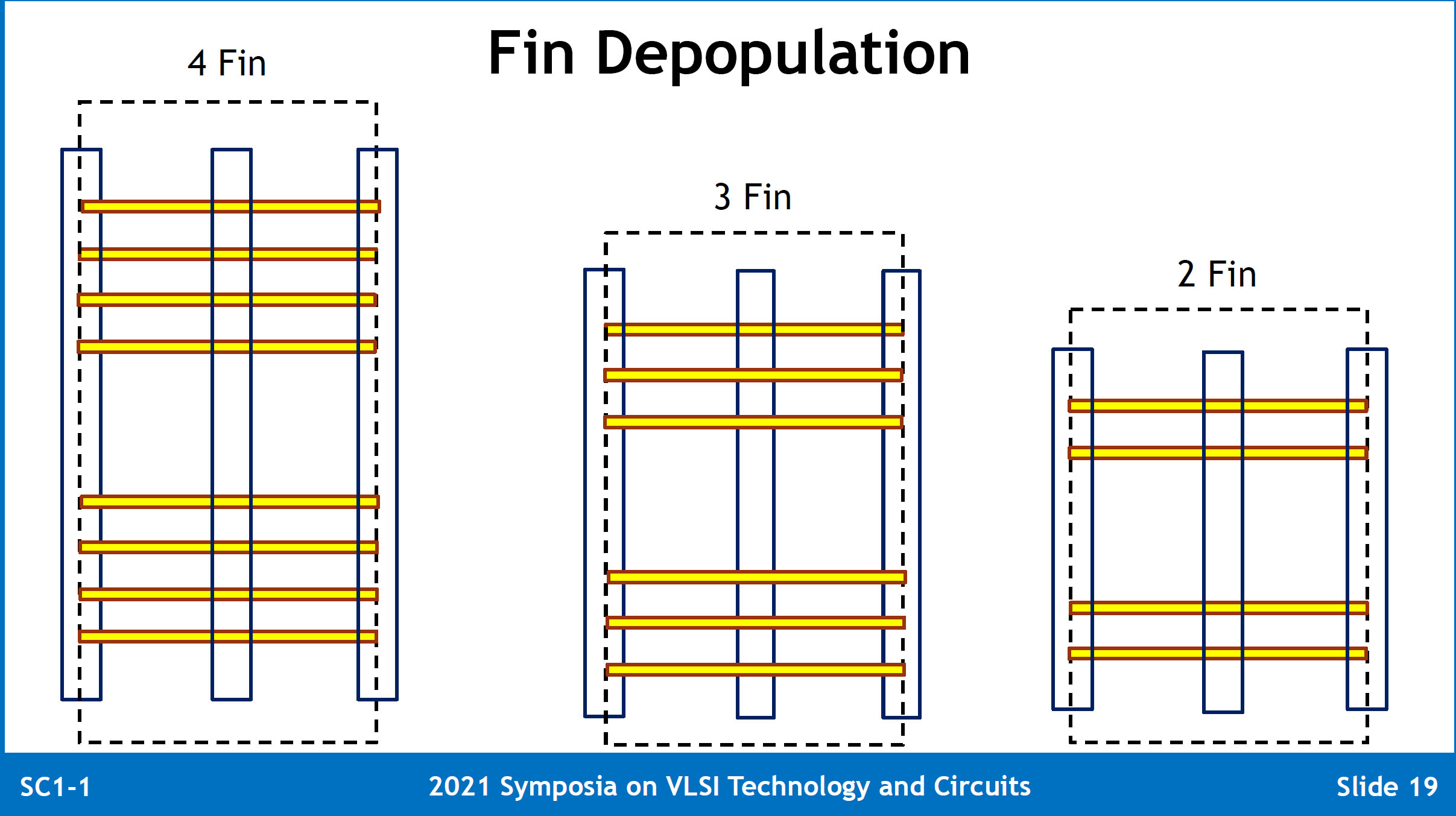 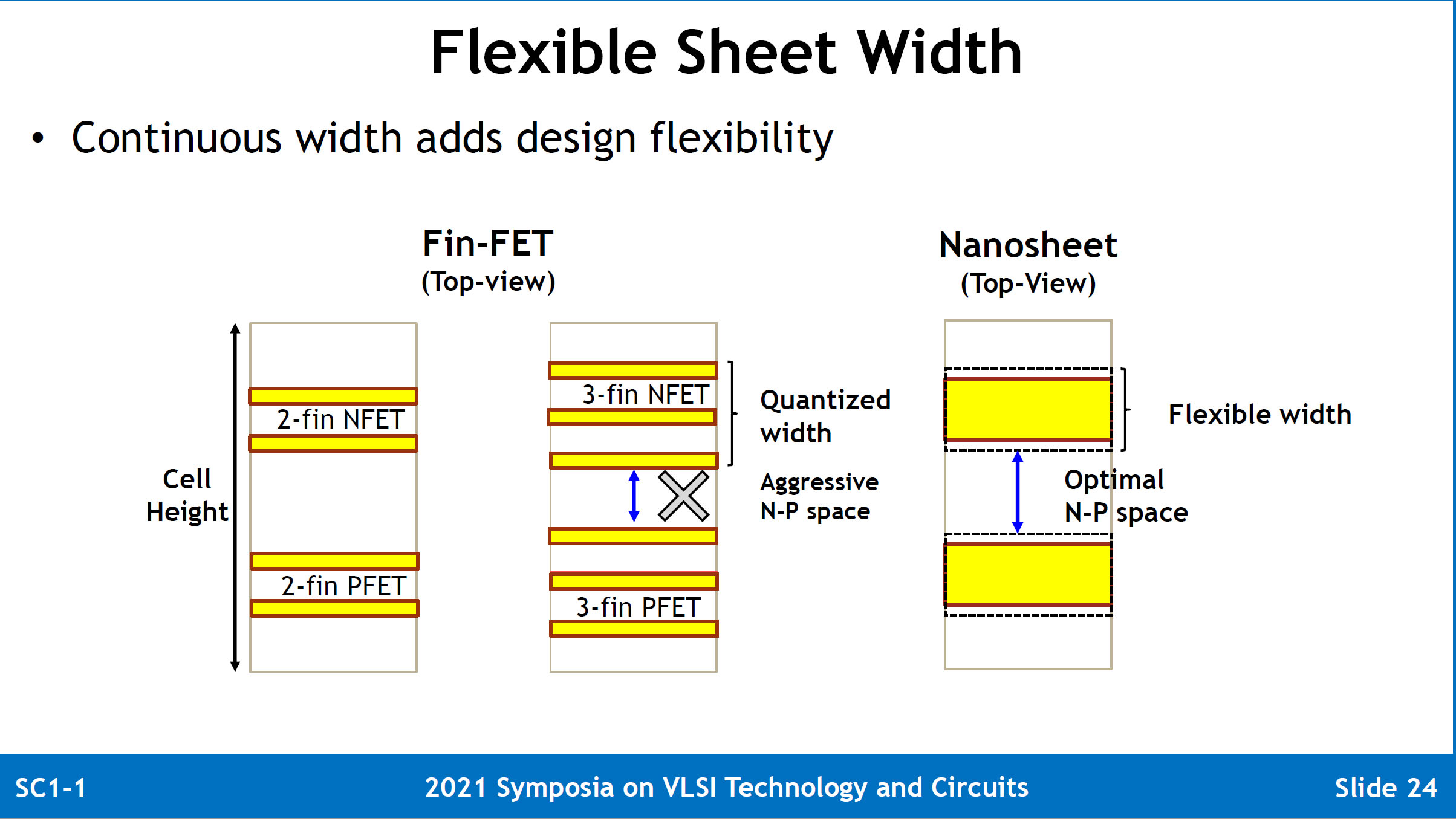 Adding sheets adds to Weff, Wee = N*2(W+H), where N is the number of sheets, W is the sheet width and H is the sheet height (thickness). Ultimately the number of sheets is limited by the performance of the bottom sheet. The spacing between sheets reduces parasitic resistance and capacitance as it is reduced but must be big enough to get the gate metals and dielectric into the gap. There is a bottom parasitic mesa device under and HNS stack that can be control by implants or a dielectric layer.

Imec has introduced a concept called a Forksheet (FS) where a dielectric layer is put between the nFET and pFET reducing the n-p spacing resulting in a more compact standard cell, see figure 4. 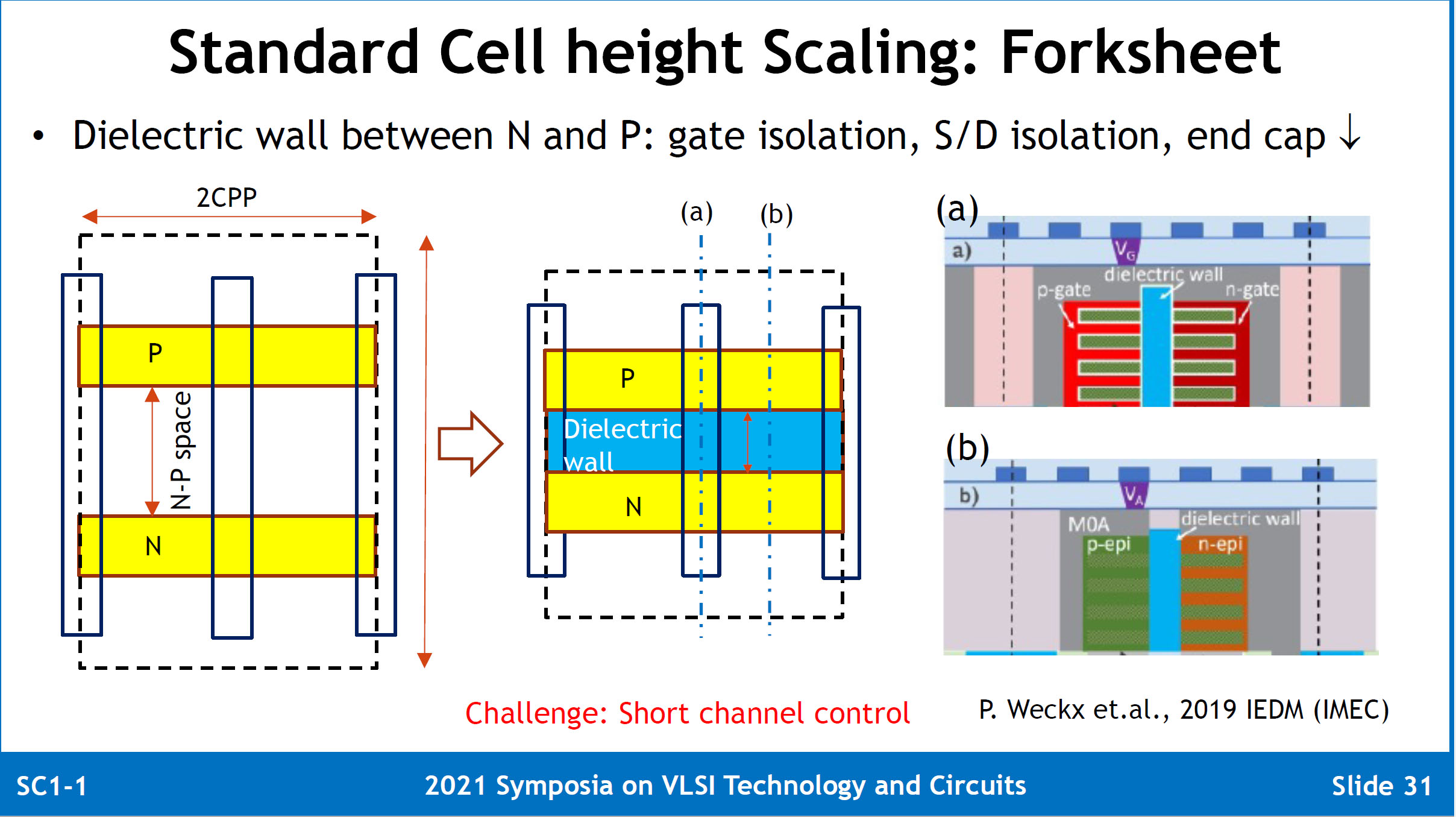 Beyond a HNS with FS, there is the Complementary FET (CFET) that stacks the nFET and pFET eliminating the need for horizontal n-p spacing. 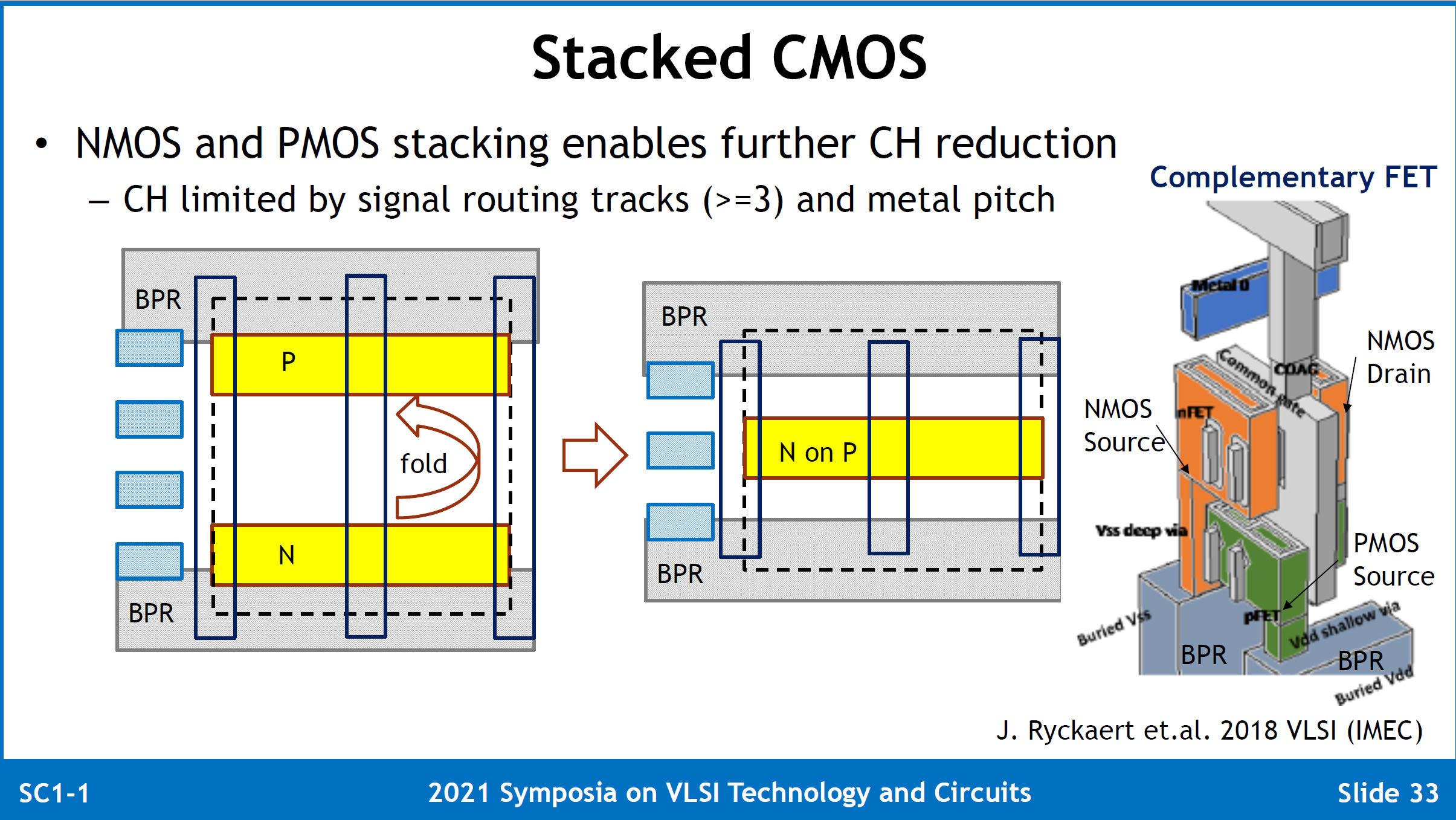 Beyond CFET the presenter touched on 3D integration with transistor integrated into the Back End Of Line (BEOL) interconnect. These options require low temperature transistors with polysilicon channels or oxide semiconductors presenting a variety of performance and integration challenges.

This section of the course expanded on the HNS/FS/CFET options discussed in the previous section.

As FinFETs are being scaled to the limits, fins are getting taller, thinner and closer. Fin depopulation is reducing drive current and increasing variability, see figure 6. 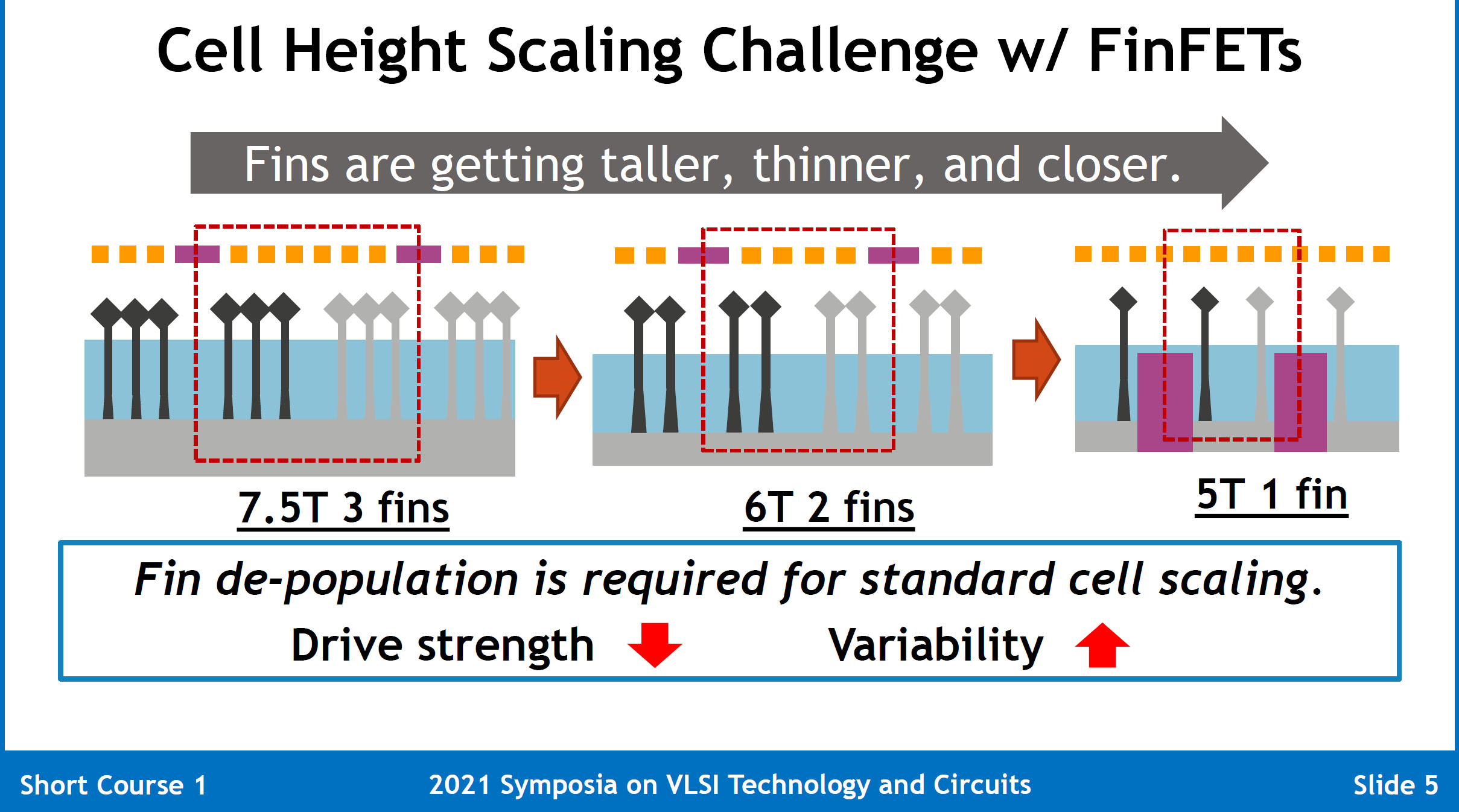 The state-of-the-art today is a 6-track cell with 2 fins per device. Moving to single fins and narrower n-p spacing will require new device architectures to drive performance, see figure 7. 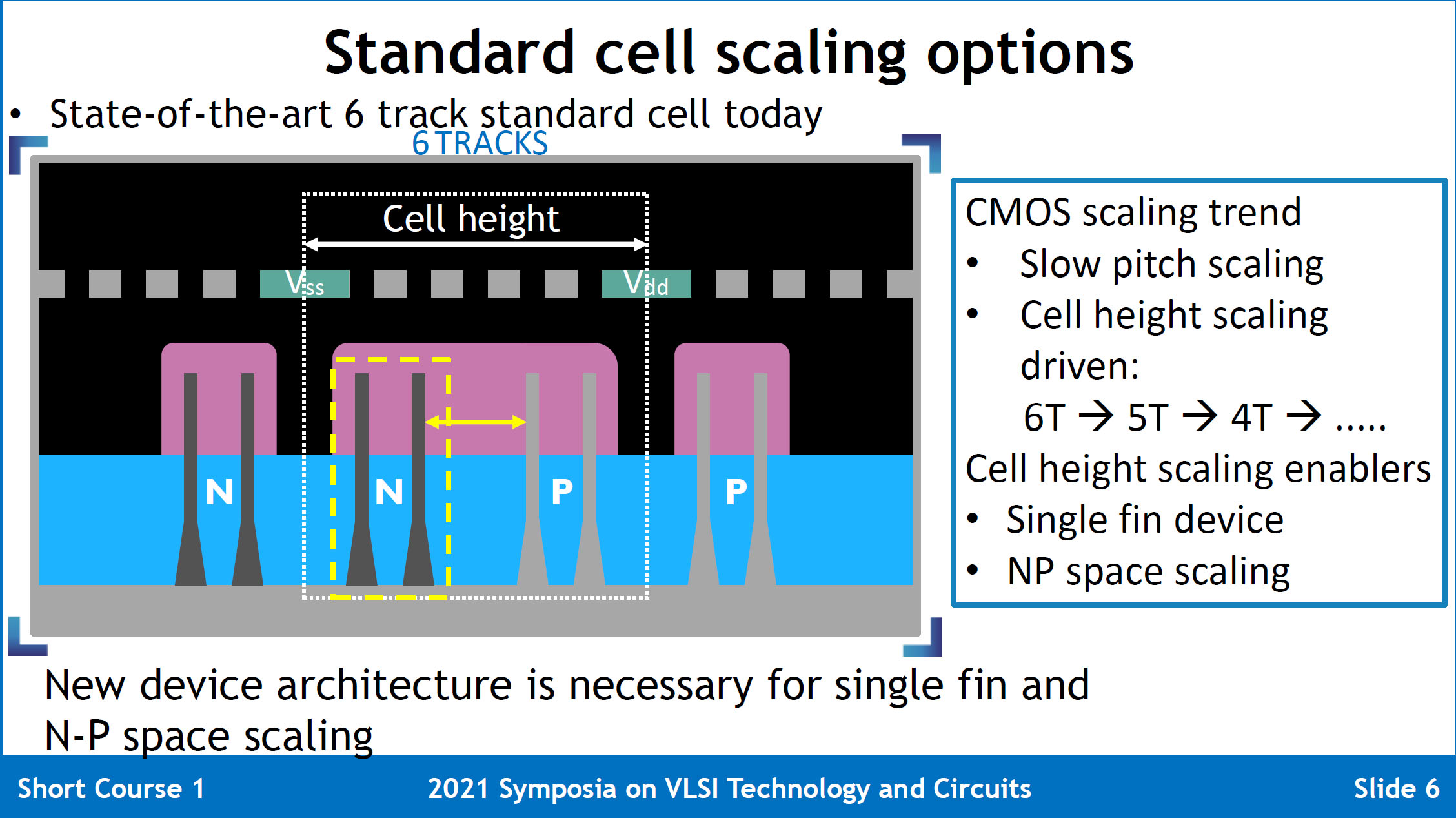 To continue CMOS scaling we need to transition from FinFET sot HNS to HNS with FS and then CFETs, see figure 8. 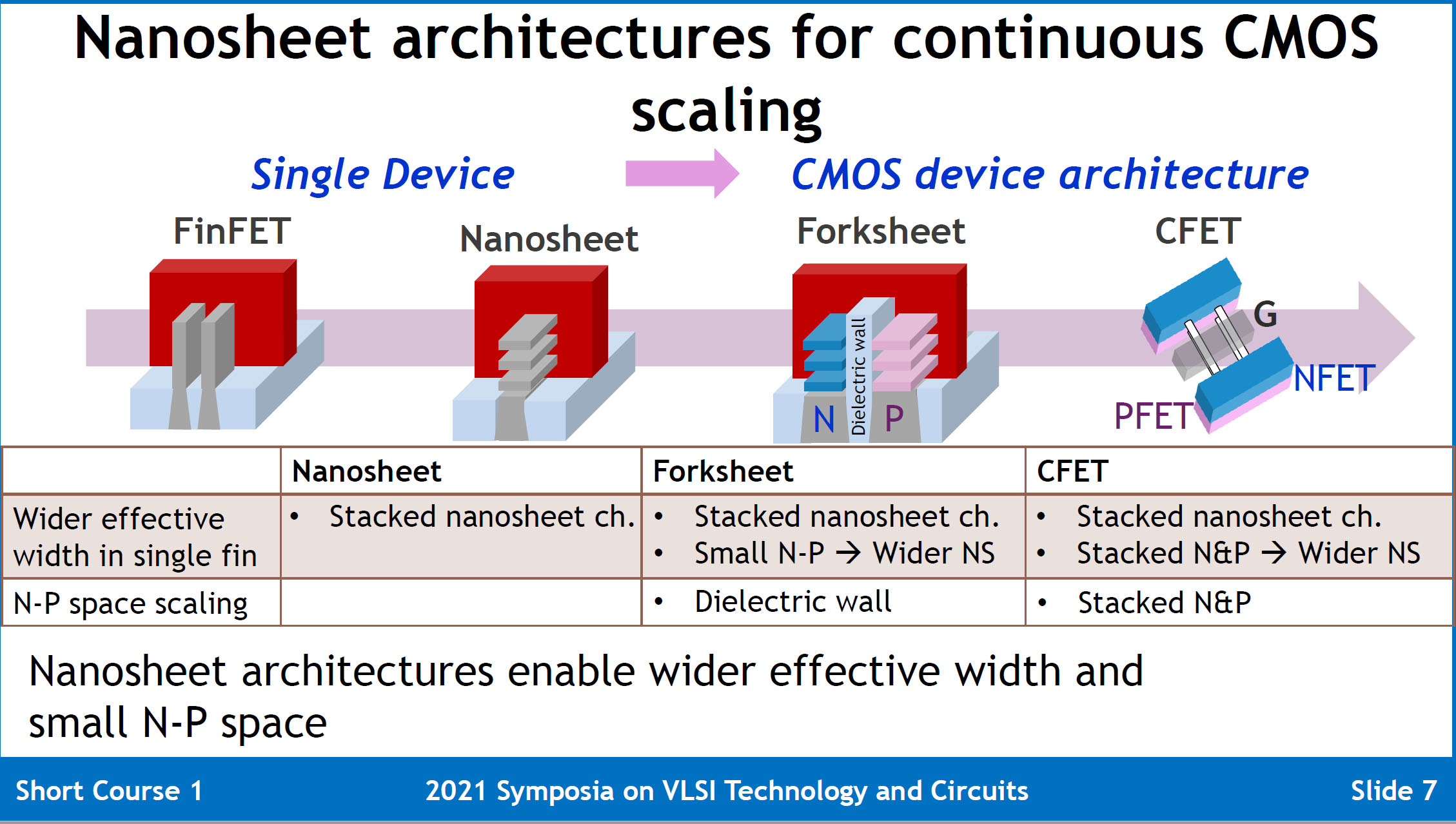 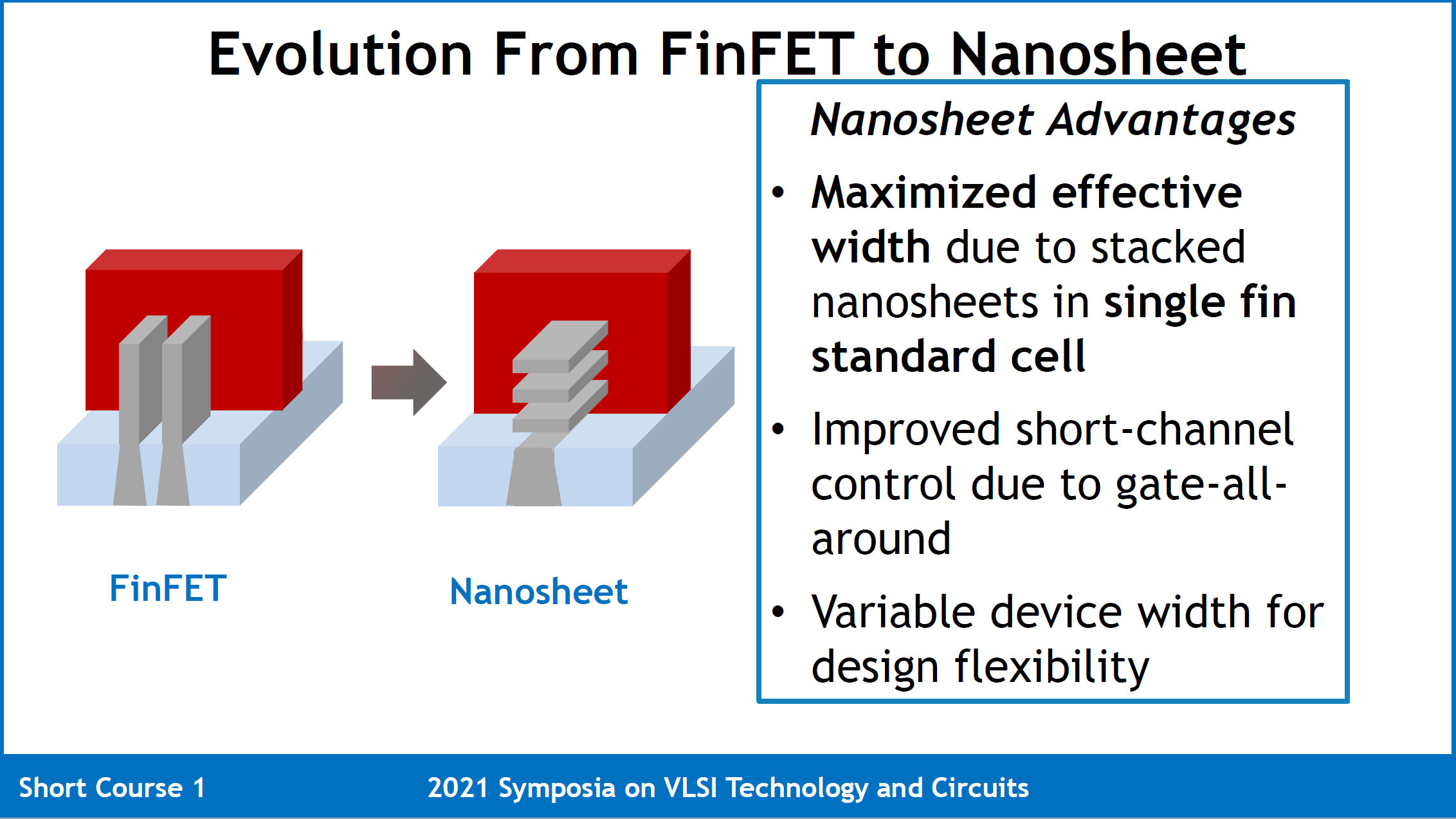 The presenter went on to go into detail on HNS processing and some of the challenges and possible solutions. A HNS process is very similar to FinFET processing except for four main modules, see figure 10. 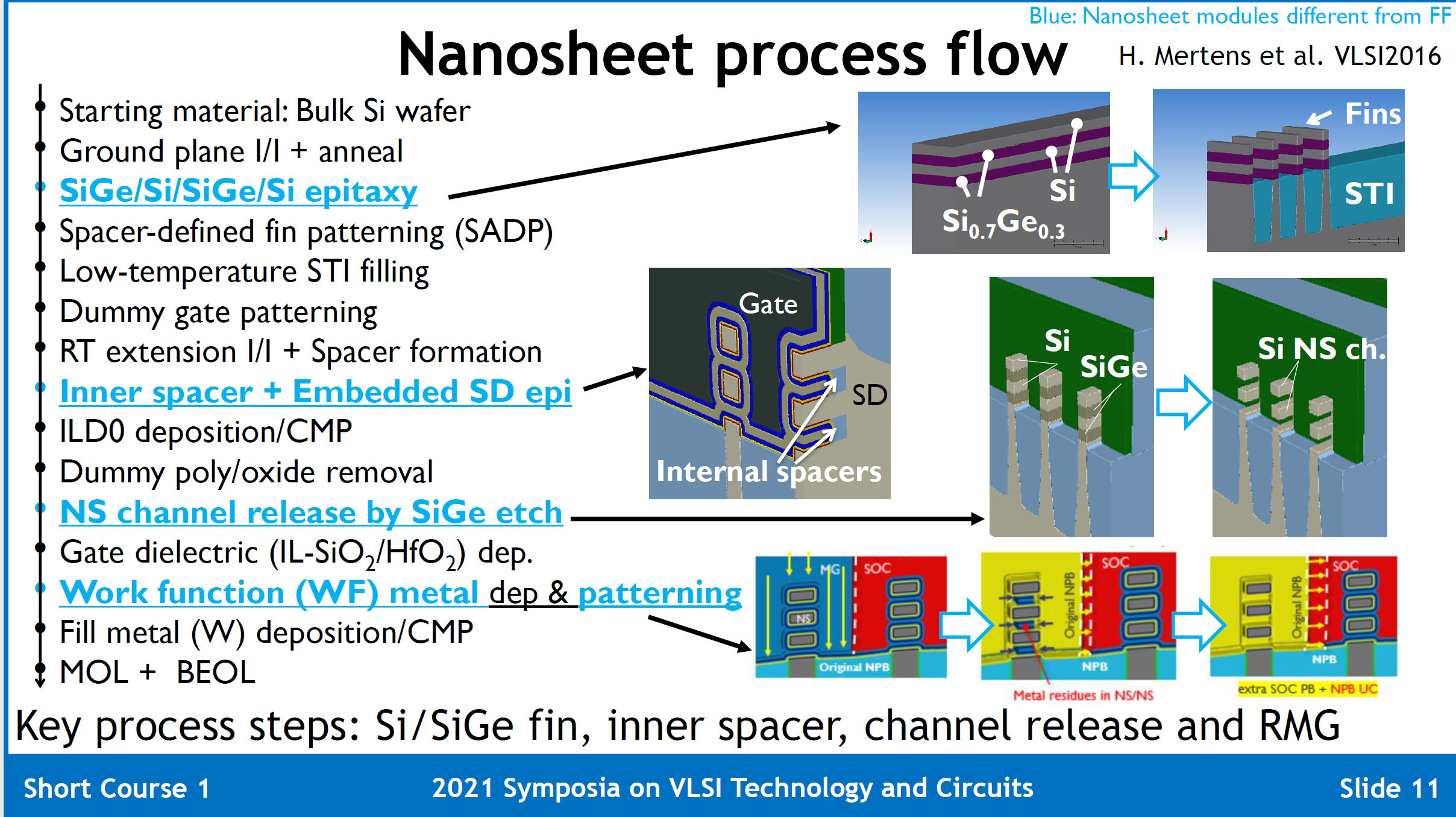 Although a HNS flow is similar to a FinFET flow the key modules that are different are difficult. The release etch and achieving multiple threshold voltages is particularly difficult. There was a lot of good information on the specifics of the process modules changes required for HNS that is beyond the scope of a review article like this. One thing that wasn’t explicitly discussed is that in order to scale a HNS process to a 5-track cell Buried Power Rails (BPR) are required and that is another difficult process module that is still being developed.

As seen in the previous presentation further scaling of HNS can be achieved by FS. Figure 11 presents a more detailed view of how a dielectric wall shrinks a HNS cell. 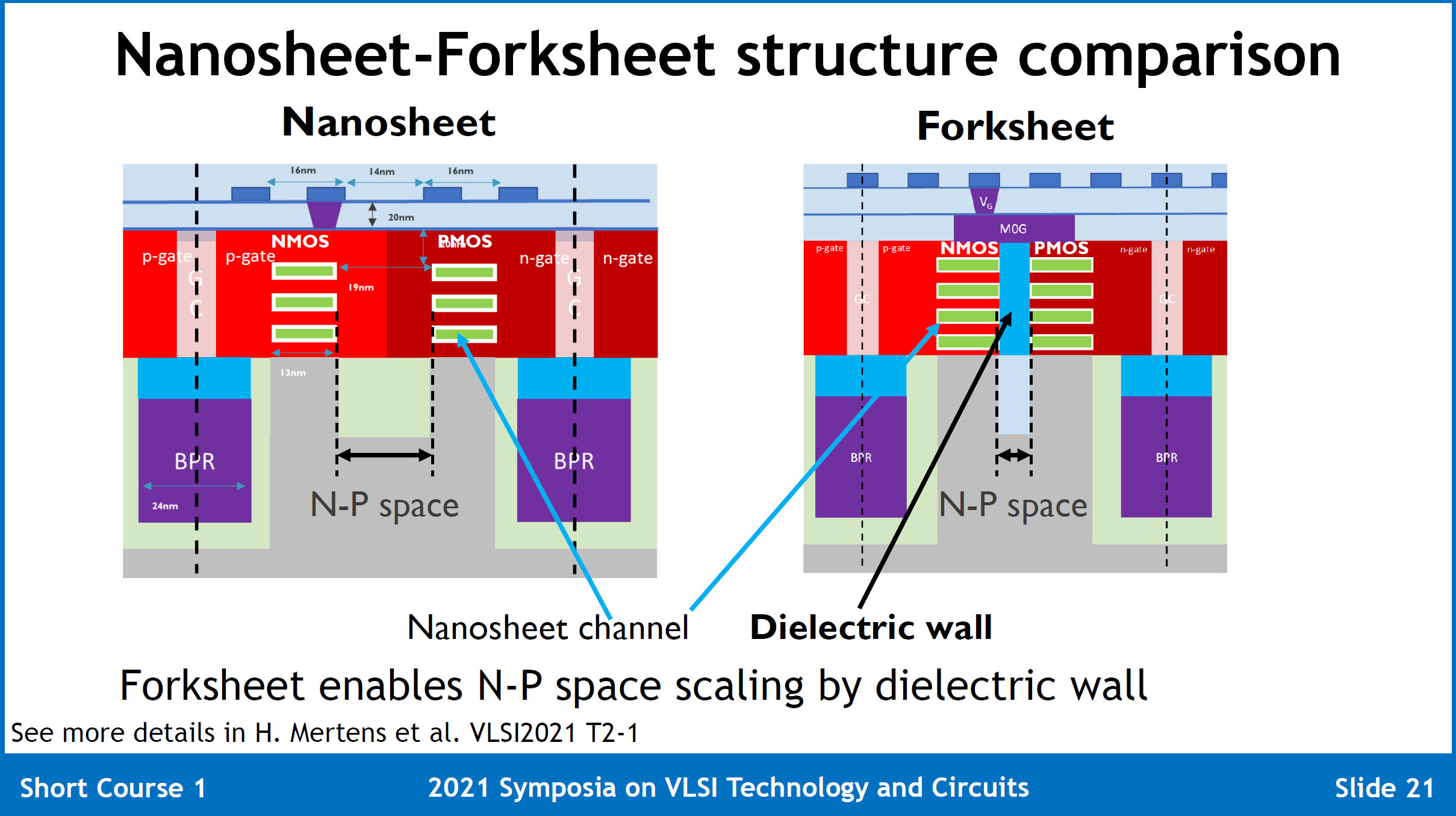 The FS process requires the insertion of a dielectric wall to decrease the n-p spacing, figure 12 illustrates the process flow. 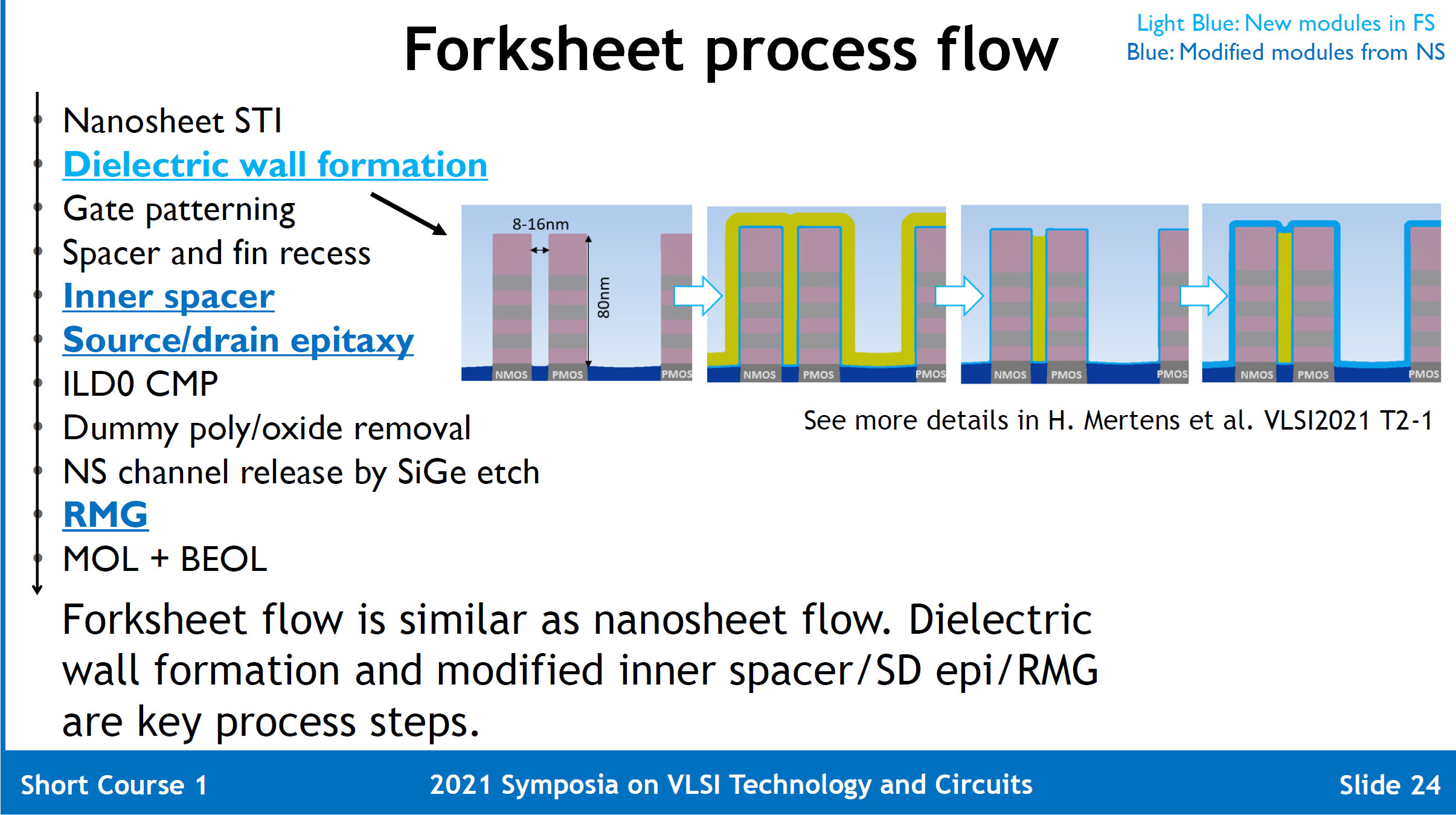 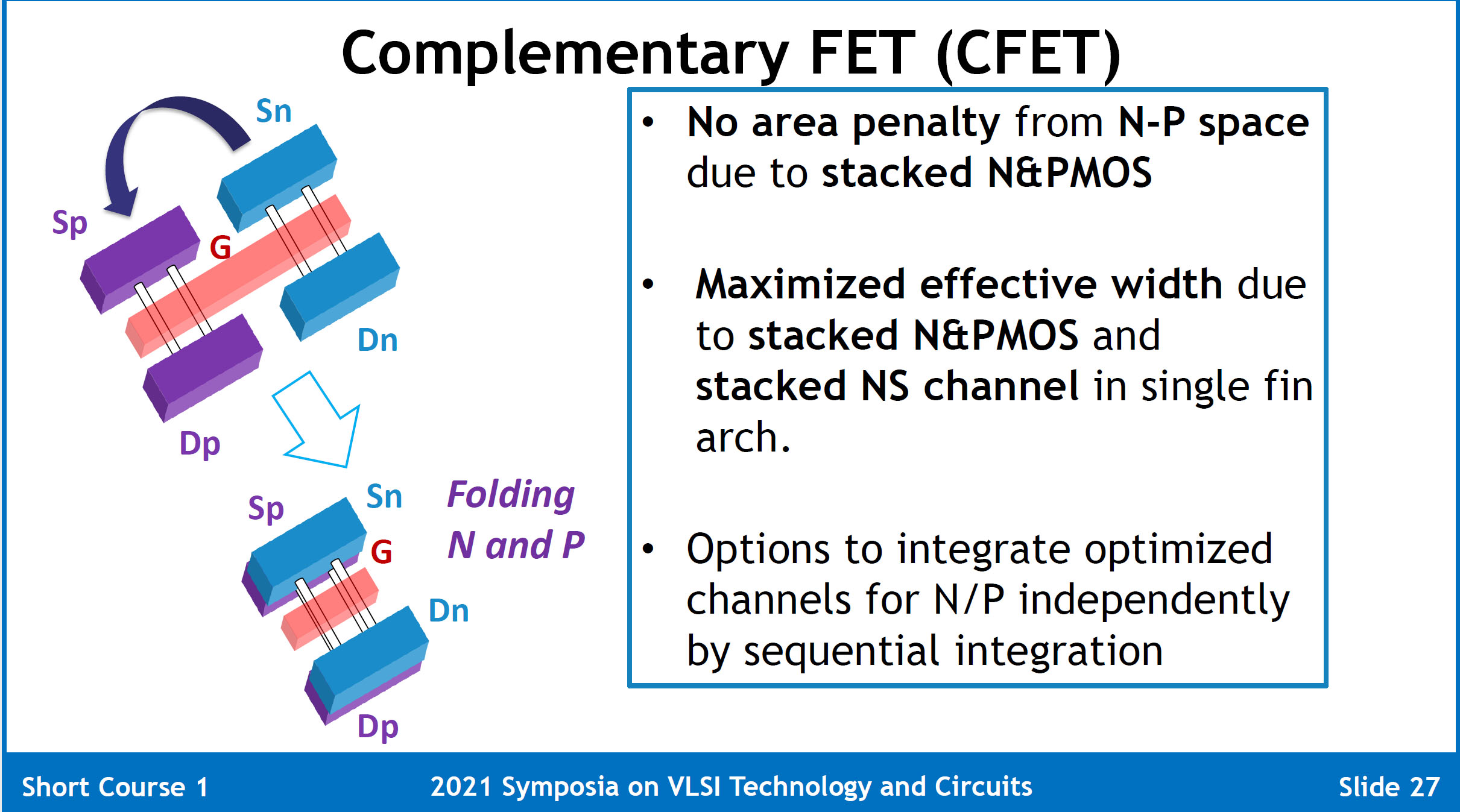 CFETs are particularly interesting for SRAM scaling. SRAM scaling has slowed and is not keeping up with logic scaling. CFET offer the potential to return SRAM scaling to the historical trend, see figure 14. 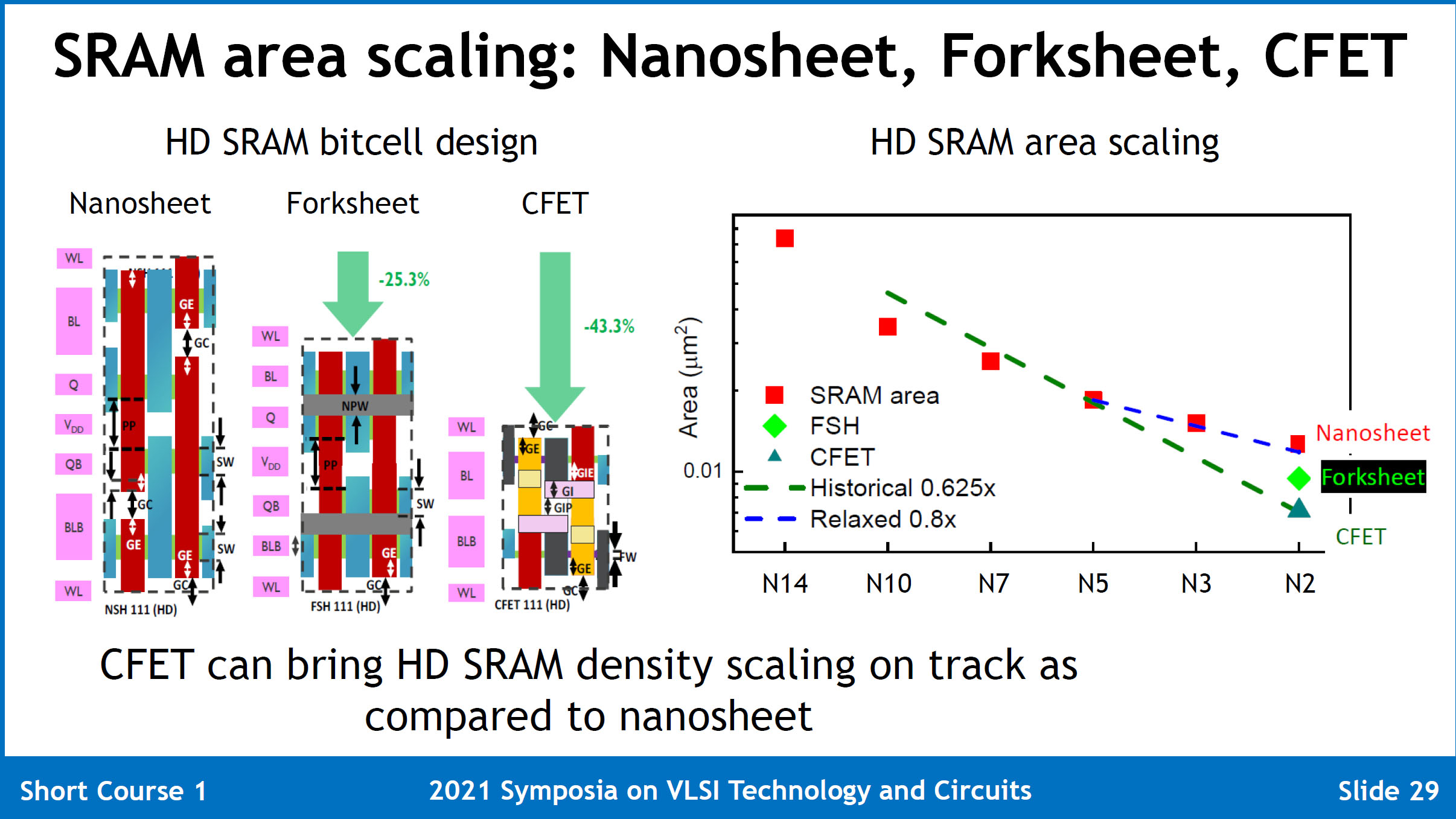 As previously mentioned there are two approaches to CFET fabrication, monolithic and sequential. Figure 15 contrasts the two approaches with pluses and minuses for each. 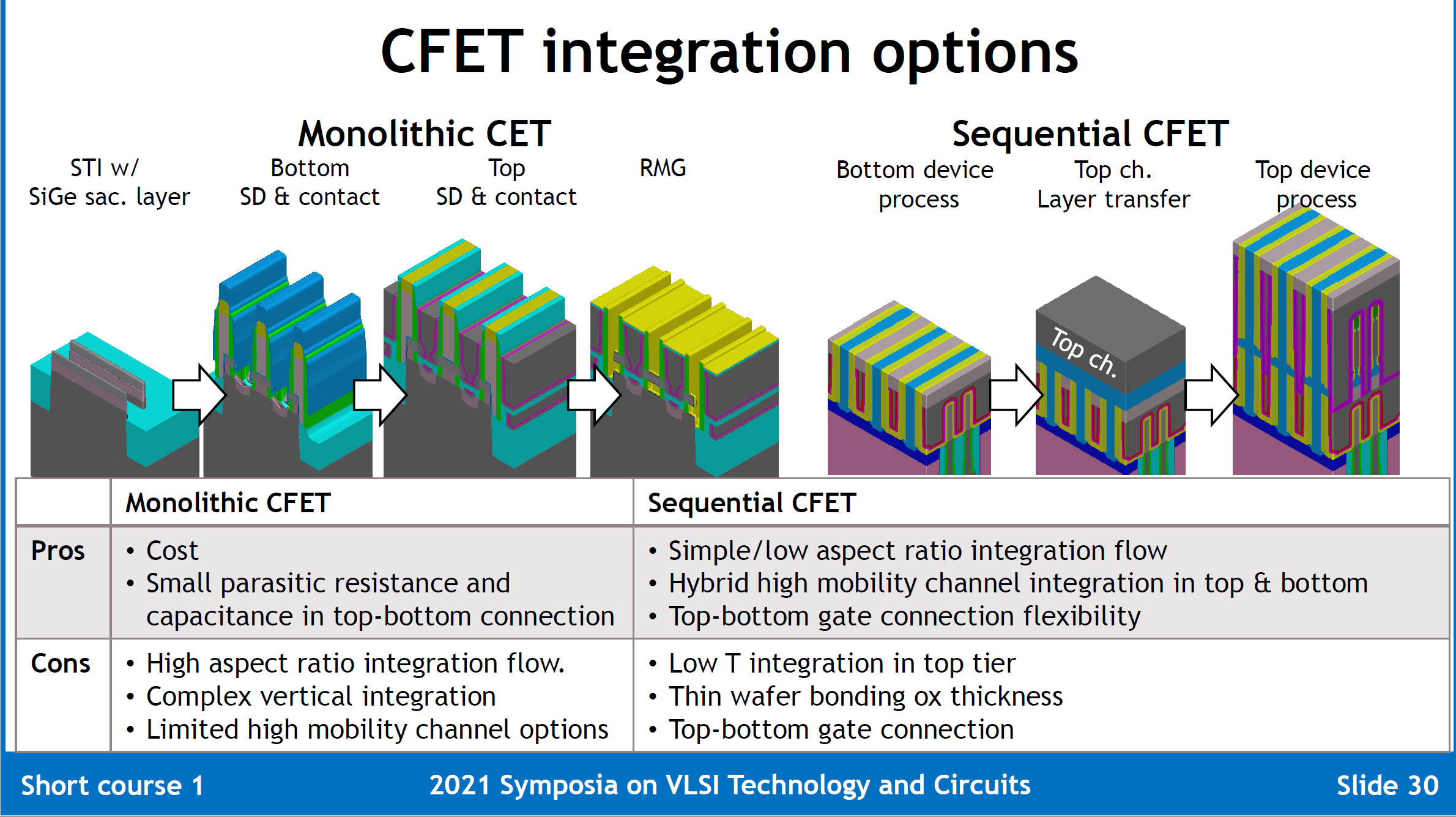 This review presented some of the key points of the two presentations leading edge logic devices. This is just an overview of the excellent and more detailed information presented in the course. The course also covered interconnect, contacts, and metrology for logic, and emerging memory, 3D memory and DRAM. I highly recommend the short courses.