Cryptocurrencies represent a radical departure from traditional forms of money. Currencies like Bitcoin, Etherium and Monero offer many unique advantages over traditional currencies, and are changing how money is created and used. Bitcoin, the pioneer of cryptocurrencies, relies on pure computational power for so-called mining, which is the process where transactions are verified and providers of this service are rewarded with newly minted bitcoins. Starting with CPU’s, then GPU’s this lead to an inexorable spiral towards more powerful and dedicated mining hardware. The mining activity moved to FPGAs and then to dedicated ASICs; at the same time, it moved to very specific geographies with low electricity costs. And, the democratization of cryptocurrency yielded to a smaller group of niche players.

Fortunately, this trend has been challenged by newer cryptocurrencies that have imposed new requirements on mining that make it more democratic. For instance, newer currencies such as Monero regularly perform forks, which change the algorithm for mining, rendering dedicated ASICs obsolete. Another strategy is requiring random memory access in a large address space. Both of these features make it more challenging to develop silicon specifically targeted at gaining an advantage in mining.

Interestingly, Achronix has developed a radical departure from traditional FPGAs in the form of embeddable FPGA (eFPGA) fabric, that coincidentally offers some compelling advantages in the mining of these newer cryptocurrencies. Achronix has written a white paper that outlines how their Speedcore eFPGA is well suited to the task of mining. However, their treatise on how well their eFPGA is for mining, also speaks indirectly to how eFPGA can be used to solve a wide variety of challenges that either traditional ASIC or FPGA may struggle with.

Achronix’s Speedcore eFPGA is highly configurable, and at the same time does not drag a lot of unnecessary blocks into the finished design. In an amusing section of their white paper Achronix refers to how some writers refer to standard FPGAs as programmable piles of parts. In all seriousness, standard FPGA parts often are mismatched to the task at hand. Nowhere is this truer than in the area of cryptocurrency mining. Things like Ethernet, PCIe, MAC’s, SerDes, etc. are not needed and just end up taking up valuable real estate for no actual benefit. Also, a multitude of small memories do not suffice for the memory needs associated with mining. 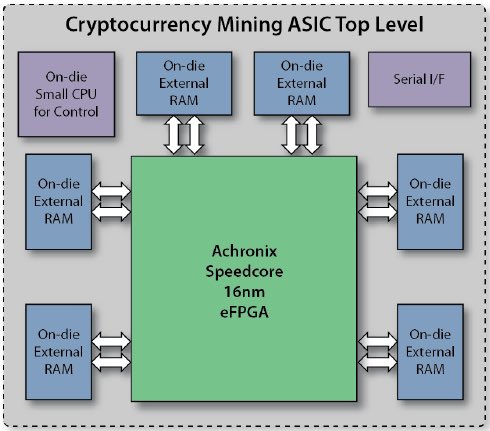 When a precisely configured eFPGA core can be married to custom memory instances, it leads to big performance, power and area advantages. Their white paper compares a case study that uses eFPGA in an ASIC to the performance of GPU or standard FPGA based alternatives. A traditional ASIC based alternative was ruled out because it lacks the re-programmability to deal with forks that require new algorithms for mining.

While perhaps some readers of their white paper may be compelled to embark on designing a new mining chip – the white paper certainly makes clear that it would be a wise choice – the bigger take away is that Speedcore eFPGA offers numerous advantages for a wide range of problems that are currently being addressed with CPUs, GPUs, ASICs or standard FPGAs. It was of course an interesting read on the directions where cryptocurrencies are headed. If you want to learn more, the white paper is available on their website, and makes for good reading.