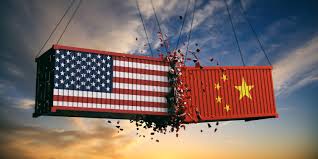 Reuters broke a story today that the proposed licensing of chip equipment to prevent “bad actors” getting chips made on US equipment was back on again, after many, including ourselves, thought it was a dead issue at least during Covid19.

Apparently at a meeting yesterday, cabinet officals agreed to change the “Foreign Direct Products Rule” such that licenses would be required by foreign users of US technology which would allow the US to prevent “bad actors” (read that as Huawei) from getting chips made on US chip equipment (AMAT, LRCX. KLAC et al) or equipment using US technology (ASML).

This rule change still needs presidential approval and Trump has previously been hesitant to support this but in light of the current bad relations with China over Covid19 his tune may have changed.

We were both right and wrong…very bad luck
We had joked in a prior note that:

“It would be a case of very bad luck if just when we start to get over the pandemic that the government would step in and halt sales that just restarted…….

Like getting over a bad case of the flu only to walk outside and get hit by a truck….”

We were also wrong in our most recent note in which we suggested that it it would be crazy and unthinkable that the administration would go forward with the blockade.

“We think the likelihood of that happening any time soon is just about zero as the US can’t do anything to upset China as China supplies 90% of our pharmaceuticals, the majority of our PPE (personal protective equipment) like masks, and probably a lot of ventilators.”

We are now obviously back on that collision course and will be taking some of our allies along with us form the ride wether they like it or not.  Most notably will be the Netherlands and ASML which did not ship an EUV tool to China due to pressure from the US.

The proposed rule change also includes equipment made with US technology which is a clear definition of ASML’s EUV tools as the heart and soul of the tool is the EUV source invented and made in the USA by former Cymer in San Diego.

At the time of the sale of Cymer to ASML there were security concerns and we could imagine that there may have been secret agreements or assurances about control of that technology that were agreed to in order to win approval of that deal.

Aside from the collision course with TSMC the rule could essentially halt all equipment sales to China as there would be no way that a Chinese chip making company would agree to not sell to Huawei (let alone TSMC).

We would be back to a virtual death sentence for Chinese Chip companies much like the now dead and buried Jinhua.

But the collateral damage would be putting US equipment makers in the intensive care unit as China is the fastest growing and most significant part of their business.

Where would this put the US vis a vis Taiwan?
TSMC is the crown jewel of Taiwan which remains a short boat ride away from China and between a rock and a hard place.

Much as China was very upset with the Netherlands over the ASML EUV embargo, China would absolutely freak out if Taiwan stopped selling critical, 5G chips to Huawei. It would be much worse than a slap in the face.

Obviously things could quickly cascade into a very bad nightmare scenario with China retaliating and halting medical sales to the US or something similarly critical.

Starting another plague to add to the first
It seems as if the timing couldn’t be much worse, just as the economy is in a free fall lets cut off chip equipment sales to China and start another trade war.

We hope this is political posturing or something similar.  The problem is that we are concerned with the current rhetoric involving China and Covid19 and the need for someone to blame and retaliate against to generate support and re-direct angst.

But as we have previously mentioned, California is not high on the list of the current administrations supporters and most chip equipment companies are there so there may be less concern about the collateral damage generated by opening a second front of a war with China.

Its hard to image the stocks getting any more unstable than they already are but this embargo could easily be it.

With the stock wildly gyrating up and down 5% and 10% mper day with little stability in sight let alone a firm bottom, we are hard pressed to get back in even though the stocks are relatively cheap.

The problem is that they could get cheaper and the China embargo could go on much, much longer , long after Covid19 is a distant memory.

6 Replies to “Newsflash Chip Equip Blockade Back on!”