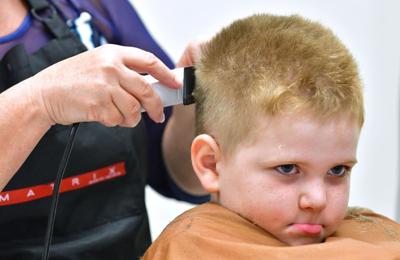 When does a haircut become a crew cut in revenues?
All the major semiconductor equipment makers took a significant haircut to their Q1 revenue and EPS guidance based on expected impact from Covid-19.

In addition to the haircut, the companies likely built in enough of a buffer to handle most eventualities however the impact of Covid-19 is likely well beyond what their expectation was over a month ago.

Lam, not wanting to ruin their recent analyst day, had an opportunity to update on business outlook, but declined.

We are getting close to pre-announcement season and would not be surprised to get a few companies laying out the negative impact of Covid-19 on their business.  We expect this in both the semiconductor and semiconductor equipment companies as well as their sub-suppliers.

We think that given the progression of the pandemic on a world wide basis that Q2 numbers could get a crew cut rather than the haircut coming out of Q1.  Given that Q1 is likely worse than expected for most companies and the stocks are in virtual free fall there is almost zero downside in trashing Q2 numbers…its not going to make the stocks go down any more than they already are.

Most companies were looking at an up Q2 after a normally seasonally slow Q1 but now flat may turn out to be optimistic for many.

Unfortunately it is still too early to call as things have not fully run their course and continue on a downward trajectory. Perhaps the bigger concern will now be if the damage done by Covid-19 can be contained within the calendar year as almost every company had originally projected.

Working from home doesn’t really work
A number of large silicon valley firms have already told employees to work from home. For a lot of companies employees with a laptop and phone can be just as effective wherever they are located.  There is not that much hard core manufacturing left in the valley with semiconductor equipment being an exception. Yesterday, Lam Research told employees to work from home and our drive past the Lam parking lot confirmed that .

The problem is that there are a lot of employees at Lam, Applied, KLA and others that screw together tools or need to be in a lab to do R&D with sophisticated equipment, that can’t work from home. We have also heard of sub suppliers working from home as well.  We would also expect Applied Materials and KLA and others to follow Lam’s lead. The problem is that work from home doesn’t work all that well for tool makers as someone has to crate it up and put it on the truck before the end of the quarter.

While Q1 may be somewhat “in the bag” already, given that we are mostly through the quarter , Q2 is more of an open question.

Much like our recent report about access to fabs being controlled and complicated by the virus, the tools makers would not like to have an infected employee take down a production line building tools.

YMTC suppliers will get first impact
YMTC, the Chinese memory maker, conveniently located in the epicenter, Wuhan, of the Covid-19 outbreak will likely see the largest impact of any fab. Right now, YMTC is not a huge supplier of memory product to the world market as they are still ramping technology….however they are a big buyer of semiconductor equipment tools and will likely have more impact on what they buy rather than what they sell.

If we look at all the rapidly expanding business done in China by chip equipment companies, YMTC is at the top of the list so it will be impactful.

We will also be looking to see how quickly they come out of it and get back to their ramp of technology.

Still getting worse before it gets better
Much like the cyclicality that the semiconductor industry goes through, things continue to slide downward for a while before bottoming and turning.

As we are in uncharted territory with the virus, its unclear whether this is a “V” shaped, “U” shaped or the dreaded “L” shaped bottom.

We are hoping and expecting a somewhat “V” shape but the virus may echo around the planet such that the echoes and collateral damage may continue long after the virus itself burns out.

Stocks- Probably still early to go back in the water
After a crash dive on Monday followed by a “dead cat bounce” on Tuesday we are back to a free fall on Wednesday that has erased the dead cat bounce gains.

This manic depressive behavior could go on for a while and its likely safer to watch from a distance.

We had suggested that the stocks and the market overall were way ahead of themselves and likely made them even more vulnerable to events and we got a big event.  Everyone seemed to know that valuations had gone too far but everyone was too busy enjoying it while it lasted.

Given all the collateral damage, and echoes of the pandemic it is likely to take a lot longer for the stocks to recover than the rapid run up in valuations we experienced over the past quarters and years .

From a semiconductor & semiconductor equipment perspective the risk of a government legislated embargo on business with China or severely limited “licensed” business has fled everyone’s collective memory.

It would be a case of very bad luck if just when we start to get over the pandemic that the government would step in and halt sales that just restarted.

Like getting over a bad case of the flu only to walk outside and get hit by a truck.

But that would never happen……..