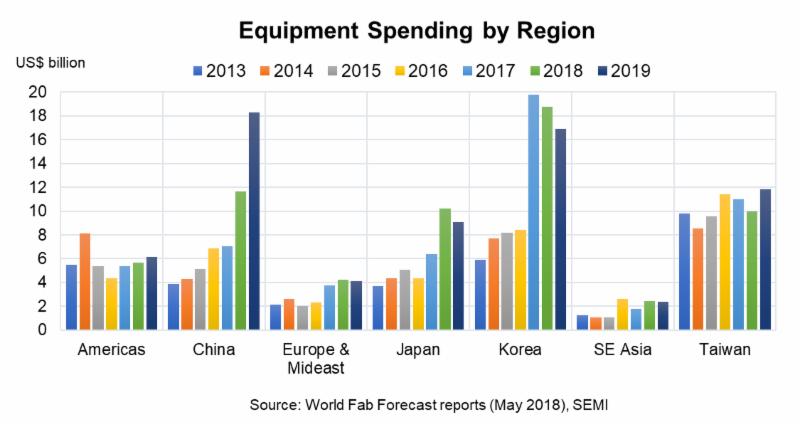 US to restrict chip equipment sales to Huawei producers
The Wall Street Journal confirmed, what we have been saying for a while, that US semiconductor equipment companies will likely be restricted in foreign sales. The confirmation goes beyond our likely worse case scenario of halting China sales to halting sales to any company that could supply Huawei with chips.

This would go well beyond China and would include Taiwan (TSMC) and other countries that could produce any sort of chip that could help Huawei.  This is much more far reaching and impactful than even a disastrous embargo on China alone.

Collision Course with Taiwan
This potential embargo would put us on a collision course with Taiwan by essentially forcing them to take sides in the semiconductor war between the US and China. Given that TSMC makes chips for Huawei, this would in essence force TSMC to stop doing business with Huawei much as we forced the Dutch from doing business (in EUV) with China as well.

This would put even more pressure on China’s desire to re-unite the run away province of China otherwise known as Taiwan. It could get even uglier very fast.

Embargo has been a long time coming, won’t go away quickly
We predicted a potential embargo of US semiconductor equipment sales to China starting two years ago. We were roundly criticized and dismissed by most in the industry and other analysts who suggested “it will never happen”, and here we are, its happening. We then predicted a year and a half ago that ASML would be the first to be impacted , and were again scoffed at, but then it happened.

We also said in our recent report on the ASML blocked EUV tool that it would be difficult for the US to keep up the pressure on the Dutch when the US continued to sell equipment China. We  said that this meant that the US would likely follow through with its own restrictions on US equipment makers….and here we are. Exactly as predicted.

This is not a trade negotiations bargaining chip

Maximum pressure
The recent indictment of Huawei and this potential equipment embargo do not appear to be bargaining chips in the trade discussions as the discussions are over and these points were not raised during the discussions. The ASML pressure campaign was also done in the dark, behind the scenes.

These multiple line of attack prongs look a lot like the maximum pressure campaign on Iran, which is a multi faceted attack across many fronts attempting to get a specific outcome. In this case it is disabling Huawei and saving 5G for the US to lead.

All this suggests that these pressures will not go away quickly or easily and will not be negotiated by the stroke of a pen, its long term trench warfare.

Much as we suggested that ASML would be a good opening shot due to zero political fallout, sacrificing US equipment companies does not have significant political consequences, as the US ratchets up the pressure.

Impacts more than majority of revenues
Its probably safe to say that a Huawei related chip equipment embargo could impact virtually all customers with the potential exception of Intel and even Intel could be affected if it wanted to sell chips to Huawei (albeit a very low probability..). It could obviously apply to Samsungs memory business as well as their foundry business. This could be a nightmare of enforcement of trying to figure out which equipment sold to whom was used to make chips for who? The semiconductor industry is so interconnected and international that it would have global impact.

This news has already permanently damaged US equipment makers
If a chip maker were on the fence about US versus Japanese equipment or Israeli or Korean, its clear the choice would be a foreign supplier to reduce the risk of the US government intervention. It obviously redoubles the efforts for China to make its own equipment. Even non-US equipment makers are vulnerable as ASML found out, but probably to a lesser extent.

Supports our more cautious view of the stocks

The China related risks to the chip and chip equipment industries change so fast it makes your head spin.First we had trade risk, then we have had Corona risk, now we are back to a US government policy risk against China.

Death by poison, death by hanging or death by firing squad…take your pick…they are all negative.  It just adds up to more risk against a back drop of stocks that have been on a tear.

In our view, Corona has been correctly discounted by the market as a transitory, temporary issue that we will get over. The trade dispute seems to have been somewhat dealt with by some agreements and kicking cans down the road.  The embargo risk is very long term in nature, much more widespread than China alone and is quite complicated given all the inter relationships. It would seem logical that as the news gets out the discount should be higher.

As no company other than ASML has had its shipments stopped by this potential embargo the market likely is dismissing it. We would not.

We have already heard of the government digging into company records of who is shipping what to China. If the government is already sniffing around it suggests they are serious about making a “bad list” of companies and equipment and are not that far from implementation.

The first company to announce sanctions on them will open the floodgates.  ASML is far away in Europe with lots of European investors. When it hits Applied, KLA or Lam it will get serious, fast….