EUV is ramping up into high volume 7nm production at Samsung and TSMC, and Intel plans to introduce EUV with their 7nm process next year. Although EUV is ramping for 7nm there is still a lot of room for improvement in the technology and going forward 5nm and 3nm will introduce additional challenges.

The first paper I will discuss makes clear just how much we still don’t know about EUV.

Then a Miracle Occurs (John Petersen) Imec
EUV displays double stochastic cliffs, at small CDs there is a microbridges/missing contact cliff and at large CDs there is a broken line/merged contact cliff. If there is no defect free window between the cliffs the structure may be printable from a Rayleigh perspective but can’t be manufactured. If there are multiple CDs on a design, there needs to be overlapping failure free windows (this behavior is covered in more detail in another Imec paper described below). Figure 1 illustrates the double stochastic cliffs.

The basic failure rate follows a Poisson distribution and is related to absorbed photons but there is also a chemistry effect. One interesting comment John Petersen made when I interviewed him is the basic defect floor due to photon shot noise is ~10e-12, we are currently orders of magnitude above that. 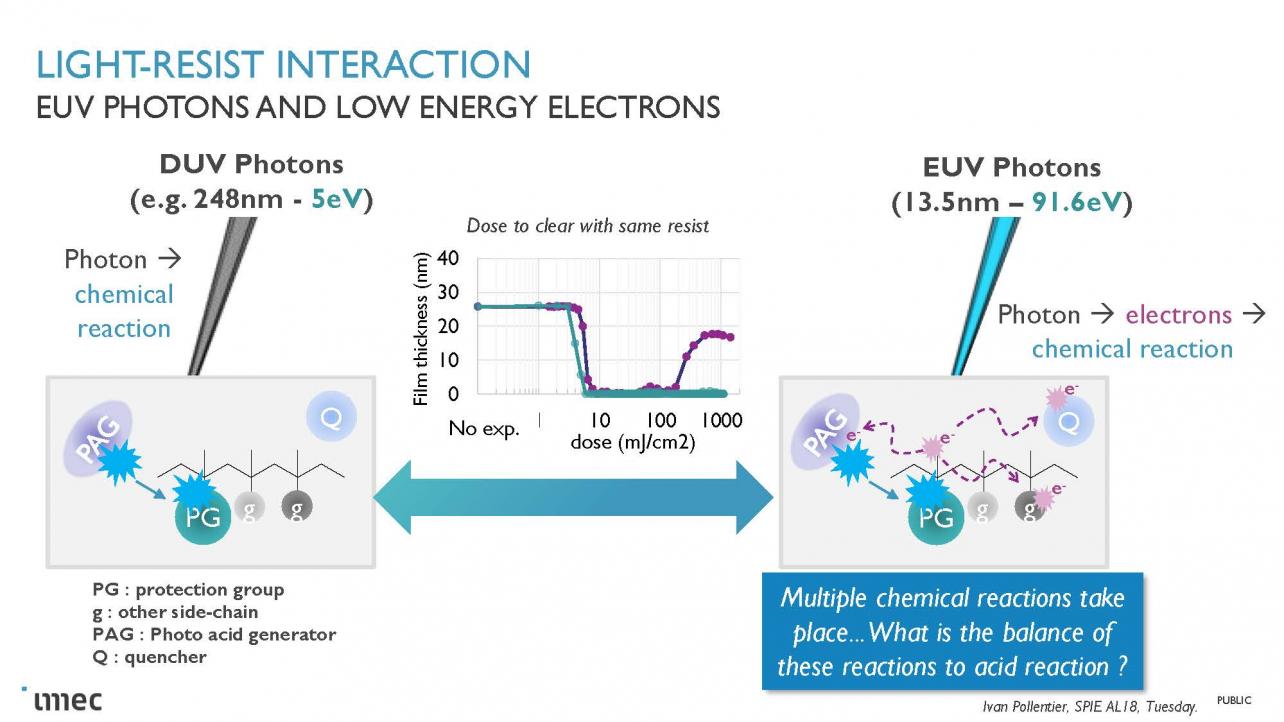 Imec announced at the conference that in conjunction with KMLabs they would “Install High NA EUV Imaging and Attosecond Analytical Lab to Probe Lithography down to 8nm pitch”. The lab is designed to answer the fundamental questions about how EUV interactions take place and hopefully lead to better optimization of materials and processes.

In the next paper stochastic defects are investigated in more detail.

Stochastic Printing Failures in EUV Lithography, P. De Bisschop
Stochastic printing failures are random, non-repeating isolated pattern failures/defects that are believed to be caused by “photon-chemical stochastics”. Photon-chemical stochastics are not simply photon shot noise but also include the equally important molecular effects in the photoresist. The “different molecular constituents of the resist have a random distribution, are only available in limited numbers, move along random “trajectories”, and interact in a probabilistic way with photons, electrons and each other.” These stochastic defects are different in behavior and cause than traditional defects like clusters, line collapse, particles and process defects. Stochastic defects occur as random microbridges, broken lines, missing or merging contacts. These defects can be quantified by defect density or failure probability.

Referring back to figure 1, the failure probability exhibits two cliffs related to critical dimension with a micro bridge/missing contact cliff at small CD and a broken line/missing contact cliff at large CD. In order to attain a yielding process, the window between the two cliffs must be wide enough and the failure probability in that window must be low enough to achieve the required yield. The window that meets these requirements is referred to as the “stochastic Failure-Free CD window”. In order to characterize EUV processes there are three types of metrology that are used: