FDSOI is gaining traction in the market place. At their foundry forum in May, Samsung announced they have 17 FDSOI products in high volume manufacturing (you can read Tom Dilliger’s write up of the Samsung Foundry Forum here). At SEMICON West in July, GLOBALFOUNDRIES (GF) announced FDSOI design wins worth $2 billion dollars in revenue with $1 billion dollars booked in 2017 and another $1 billion dollars in revenue booked in the first half of 2018. With the emergence of FDSOI I thought it would be useful to review who the players are in the market and what their current and planned processes look like (I recently did a similar leading-edge analysis for FinFETs available here).

CEA Leti has served as the key research group in the development of FDSOI working with ST Micro on 28nm and 14nm processes and working with GF on 22nm and 12nm processes.

FDSOI requires engineered substrates with very thin single crystal silicon layers on buried insulator layers to insure the channel region is fully depleted. The primary supplier of FDSOI substrates is Soitec with SEH as a second source (I have written more on Soitec and their FDSOI substrates here and have another article on Soitec due to be published shortly).

ST Micro
ST Micro introduced 28nm FDSOI in 2012 that is produced in their Crolles II – 300mm wafer fab. The 28nm FDSOI process offers a 32% to 84% improvement in performance over ST Micro’s 28nm bulk process. ST Micro also developed a 14nm process with CEA Leti but it is not in production. ST Micro has reportedly begun working with GF on GF’s 22FDX FDSOI process so long-term ST Micro may not continue to produce their own FDSOI and may move to a fabless model for this technology. Crolles II is a relatively low capacity 300mm fab and ST Micro makes other things in the fab, so FDSOI volumes are likely not large.

Samsung
Samsung licensed ST Micro’s 28nm FDSOI process and used it to create Samsung’s 28FDS process. 28FDS entered production in 2015 and is producing 17 high volume products as previously mentioned. An 18nm follow-on process is in development and due next year.

Samsung has significant foundry capacity and can ramp FDSOI to very high volumes as needed.

GLOBALFOUNDRIES (GF)
GF’s 22FDX process entered production in 2017 and offers a 400GHz fmax, embedded MRAM nonvolatile memory and is automotive qualified. 22FDX can operate down to 0.4 volts for low power applications. There are four versions available offering, low power, high performance, low leakage or RF & analog. 22FDX is based on ST Micro’s 14nm process for the front end and the back end is optimized for cost with 2 double patterned layers and the balance of the layers being single patterned.

A follow-on 12FDX process was originally due in 2019 but GF is holding off introduction of the process because customers are just now designing and ramping up products on 22FDX. Development of 12FDX is proceeding well and it will be introduced when needed, we estimate this will be around 2020. 12FDX will offer 20% performance improvement over 22FDX.

GF is producing 22FDX in their Dresden fab and has significant capacity in place. A fab being brought up in China will also become a source for FDSOI capacity in the future. 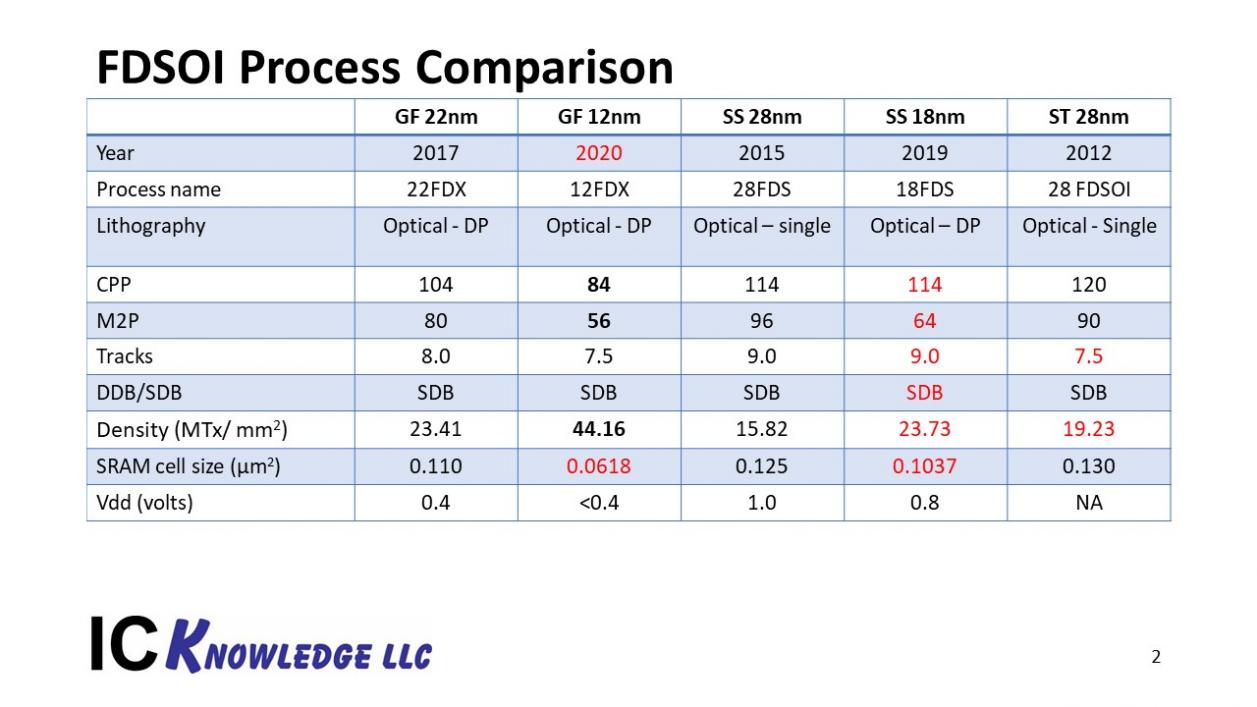 One thing I have a hard time understanding is why Samsung isn’t more aggressive on operating voltage. Power consumption is proportional to the operating voltage squared and FDSOI is targeted at many low power applications. GF has a clear lead in low power operation with their 0.4 volts Vdd.

FDSOI also offers the unique capability for back biasing to set threshold voltages and tune performance and power consumption. Accessing the back gate for back biasing only requires a 1% area penalty while delivering a unique and useful capability not available in other processes.

Conclusion
We believe that FDSOI is well positioned to capture market share in IOT, 5G, and automotive applications. FinFETs will continue to be the technology of choice for applications with a lot of digital logic and that require the highest possible performance. After many years of development FDSOI is poised to become a main stream alternative.

2 Replies to “FDSOI Status and Roadmap”