Register / Log In
Guests have limited access.
Join our community today!
You are currently viewing SemiWiki as a guest which gives you limited access to the site. To view blog comments and experience other SemiWiki features you must be a registered member. Registration is fast, simple, and absolutely free so please, join our community today!
FDSOI Status and Roadmap
by Scotten Jones on 07-23-2018 at 7:00 am
View Profile
View Forum Posts

The cost trend for leading edge semiconductor technologies is a subject of some controversy in the industry. Cost is a complex issue with many interacting factors and much of the information out in the industry is in my opinion misleading or incorrect. In this article, I will discuss each of the factors as well as present a view of … Read More

18 months ago Renesas announced they were prototyping their SG-MONOS eFlash on 28nm, and at the time we said it would be a couple of years before actual product. Yesterday, Renesas revealed their partner in this effort is TSMC – no surprise – and hinted things are moving, with better performance than expected but on a longer qualification… Read More 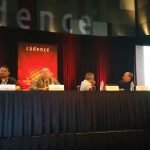 IC design challenges are different at advanced nodes like 7nm, so to learn more about the topic I attended a panel luncheon at DAC sponsored by Cadence. The moderator was both funny and technically astute, quite the rare combination, so kudos to Professor Rob Rutenbar, a former Neolinear guy now at the University of Illinois. Panelists… Read More

For any invention, technical proof of concept or prototyping happens years ahead of the invention being infused into actual products. When we talk about 5nm chip manufacturing, a test chip was already prototyped in last October, thanks to Cadence and Imec. Details about this chip can be found in a blog at Semiwiki (link is given … Read More

I have been silently watching STMicroelectronics pursuing FD-SOI technology since quite a few years. FinFET was anyway getting more attention in the semiconductor industry because of several factors involved. But from a technology as well as economic perspective there are many plus points with FD-SOI. I remember my debate,… Read More