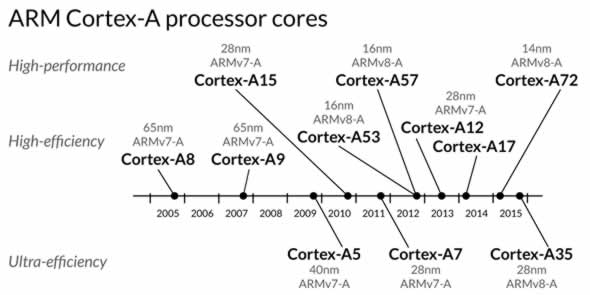 Since creating the landmark “all-you-can-eat” license with Samsung in 2002, ARM has inked several subscription deals with chipmakers and EDA firms. The latest ARM subscriber license deal just announced is for Mentor Graphics. What makes their strategy unique?

What this indicates is just how dramatically the ARM ecosystem is changing. I recall sitting at a dinner at DAC in Anaheim, coincidentally hosted by Mentor, with some ARM folks in 2010. That was just before the ARM Cortex-A15 introduction. Privately, they shared concerns over just how complex the A15 core was, and how it would challenge customers in SoC integration. They were spending a lot of time and effort working with the EDA vendors and lead customers to smooth out the process. Historically, ARM has understood that having the right tools for customers is just as important as having cutting-edge IP for customers. I haven’t updated our timeline yet, but we can now add the ARM Cortex-A32 core announced a few days ago at Embedded World 2016:

Mentor also understands the idea of enabling smoother designs, with both a pre-silicon and post-silicon perspective. On the pre-silicon side, Mentor EDA tools are extensive, and many are in use at ARM already. (ARM is quick to point this is non-exclusive, but confirms they do use Mentor tools in-house. Both Cadence and Synopsys have similar ARM IP subscriptions.) Post-silicon, efforts at Mentor Embedded help get software running more quickly, and close relationships with ARM’s customers mean software support for SoCs is often released concurrently with the chips – a real plus for getting design-ins moving.

This subscription license moves collaboration between ARM and Mentor Graphics to a higher level. The deal provides Mentor access to everything in the ARM stable: Cortex processors for ARMv8-A and ARMv7-A architecture, Mali graphics cores, CoreLink interconnect IP, Artisan physical IP, and POP IP. It also provides Mentor early access to new ARM cores such as the Cortex-A32 and beyond.

One of the pain points for EDA vendors and ARM has always been in customers debugging EDA tools for new products. Adding mutual customers to the equation defining this agreement, SoC designers working with pre-release ARM IP should be able to get qualified pre-release Mentor EDA tool support much earlier. Mentor will have seen the IP and any areas where customers may need insight or assistance, which should also clear up support channels.

A big case for pre-silicon verification is faster software development, and this may be what sets the Mentor agreement apart from their EDA peers. Using their own emulation tools running early access IP, Mentor Embedded teams can have software ported to early access ARM cores way before merchant silicon is available. That could mean months earlier for software bring-up on a new part, especially on a custom SoC design. This moves the entire system realization clock forward, reducing friction associated with new ARM IP.

For a while now, SoC design starts have been moving toward bigger and fewer powered by mobile applications. I’m expecting that trend to reverse in the coming years, with an increasing number of design starts for medium to large chips in markets such as automotive, cloud infrastructure, IoT, and wearables, while the flagship mobile starts continue. ARM’s release of the Cortex-A32 is confirmation of that trend, aimed right at a crowd doing more efficient designs – and looking for new EDA tools.

Shakeel Jeeawoody, Strategic Alliance Sr. Marketing Manager at Mentor Graphics, built on that idea. He indicates that new use cases for emulation are appearing, such as adding design-for-test features that can really only be verified near the end of a design. There is a strong temptation to skip what might be a week or two in the schedule, which can be dangerous for complex implementations. Using Veloce emulators, DFT can be added and verified much more quickly. New design starts with new ARM IP may mean an increase in new emulation users.

Wally Rhines has always been very careful before signing on the dotted line of any major licensing agreement. It’s a big step, one I’m sure pessimists will say was just to keep pace with competitors. I think there is more to this agreement than that. Mentor is much farther along in its IoT strategy and is running into new types of customers, ones thinking way beyond simply building ARM-based chips and looking at all the pieces needed for system realization. That is the change in the ecosystem I’m watching carefully.

More from Mentor Graphics on this ARM subscription license agreement: