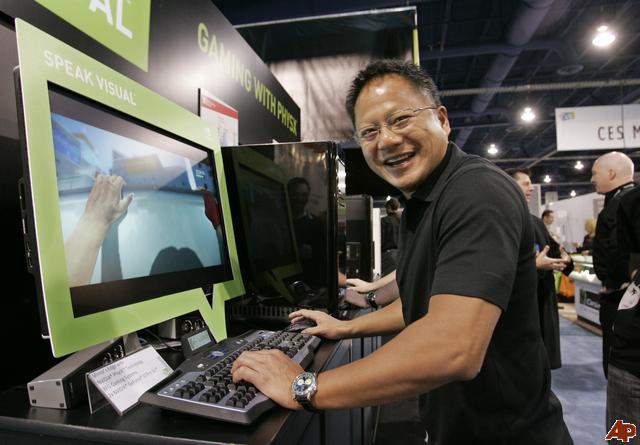 It is always a treat to listen to the nVidia earnings conference call as Jen Hsun Huang offers his take on the industry as well as a peek at his company’s future plans. Invariably a Wall St. analyst will ask about Windows 8 and Project Denver – the code name for the ARM based processor designed to run Windows 8 with great graphics performance and in categories that Jen Hsun describes in meticulous detail as Tablets and Clamshells. In last week’s call, Jen Hsun went out a little further on the ski tips as he claimed that he is going to take ARMs architecture into market segments it hasn’t gone before through “extensions.” Let me cut to the chase, he is going to build a CPU with x86 instruction translation with the help of the cadre of engineers imported from Transmeta.

Before I go any further, let me back up for those of us who didn’t get the Microsoft update. Up until a Microsoft Analyst meeting in September, the standard line from the Redmond folks was that everything that ran on Windows 7 would run on Windows 8, regardless of the processor (x86 or ARM). Renee James of Intel mentioned at a Spring Intel conference that x86 apps would not run on ARM based Windows 8 machines. Microsoft had a cow and let the world know that Ms. James wasincorrect. Turns out she was correct and she should know since she heads up the Software Group at Intel that makes sure that Windows 8 and applications will run on Intel’s newest processors. Uh Oh, the Emperor Just Lost His Clothes!

Just to set some leveling here… Intel and Microsoft are going through a long divorce. It will be messy and stretch out for years, maybe even decades. Renee James’ comments are the type that are strategic and the wording is reviewed in great detail by multiple people, including CEO Paul Otellini. So Paul is saying to Steve Ballmer, “Time to come clean buddy.” And to ARM, Otellini is saying, “x86 isn’t dead in PCs by a long shot.” Or maybe nVidia has a different answer.

That brings us up to Microsoft’s September statement from Steven Sinofsky on what Windows 8 can run:

We’ve been very clear since the very first CES demos and forward that the ARM product won’t run any X86 applications. We’ve done a bunch of work to enable that — enable a great experience there, particularly around devices and device drivers. We built a great deal of what we call class drivers, with the ability to run all sorts of printers and peripherals out of the box with the ARM version.

Oh what would we do without analysts to tell us the future?

Back in the days when Transmeta was still around, it shopped itself to the usual suspects. Jen Hsun passed on a direct buyout and instead hired some of the best engineers. Rumors flew around about nVidia building a direct x86 competitor to Intel, however the true value of Transmeta engineering was in the x86 compatible software translator that sat on top of a VLIW core with some hardware hooks for performance. The significance of Transmeta was both the translator and the discovery that the world was about to ditch MHz and go for mobile wireless devices with extra long battery life that emphasized the visual experience over some PC Mag benchmark. All the benchmarks in the day however centered around jumping in and out of Office Applications making tweaks here and there demonstrating why 1GHz Pentiums were much more valuable than 933MHz ones.

Bear in mind that Jen Hsun Huang expects the Project Denver question at every quarterly earnings call, so here in his own words:

“Project Denver, our focus there is to supplement, add to ARM’s capabilities by extending the ARM’s architecture to segments in a marketplace that they’re not, themselves, focused on. And there are some segments in the marketplace where single-threaded performance is still very important and 64 bit is vital. And so we dedicated ourselves to create a new architecture that extends the ARM instruction set, which is inherently very energy-efficient already, and extend it to high-performance segments that we need for our company to grow our market. And we’re busily working on Denver. It is on track. And our expectation is that we’ll talk about it more, hopefully, towards the end of next year. And until then, until then I’m excited, as you are.”

Essentially, nVidia’s model is that for most of the PC market what matters is compatibility and graphics performance. In the nVidia model the x86 CPU is a sidecar. In the future you will pay more for a better graphics experience than CPU performance. If the performance of Jen Hsun’s multicore ARM is way beyond what a typical Microsoft Office User expects. An x86 software translator on top of the ARM cores at 20% performance of native should be just fine. I picked 20% – maybe it’s 25% or 30% but you get the idea. To be unique and to get away from the pack (TI and Qualcomm), nVidia will implement some instruction extensions to enable the translator. Since nVidia already has the gaming community on its side writing games that directly go to the graphics GPU, Jen Hsun can envision a scenario where it is Game Over!