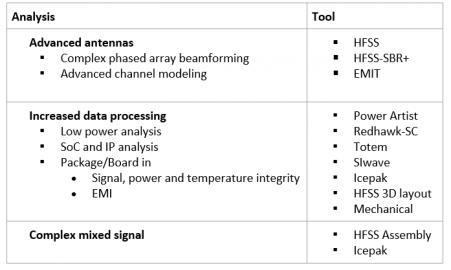 Accelerating 5G Innovation and Reliability Through Simulation and Advanced FinFET Design
by Camille Kokozaki on 02-14-2019 at 7:00 am
View Profile
View Forum Posts

In an ANSYS seminar held at DesignCon 2019, Dr. Larry Williams, ANSYS Director of Technology, outlined how 5G design innovation can be accelerated through simulation. He posited that 5G will become a general-purpose technology that affects an entire economy, drastically alter societies and unleash a cascade of complementary innovations (*).

For starters, advanced simulation can help 5G in the analysis of advanced antennas, data processing, and complex mixed signals. The types of analysis and the tools used to accomplish them are summarized in this table below.

5G Phased Arrays produce multiple beams and null out interfering unrelated users. The 5G new radio provides each user their own beam, and with massive MIMO can support multiple simultaneous users in the same bandwidth. 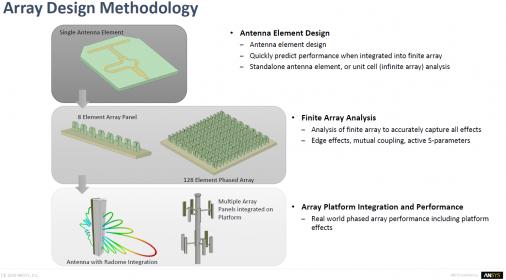 According to Skyworks’ CTO Peter Gammel (**), mobile operators can achieve 5G speeds on a 4G network by enabling Carrier Aggregation. Schematic-based and error-prone tedious methods can be replaced with assembly modeling automating the process allowing scripted steps that reduce the time and eliminate system wiring errors.

Full mesh assembly is now possible in ECAD and MCAD allowing an accurate and efficient mesh creation and capturing full network parameters for all nets including small pitch and/or meandering traces and with accurate coupling and isolation.

By 2022, autonomous vehicles are estimated to use 4TB/day/car for an average hour of operation. By 2022, Mobile users are estimated to pull 25GB/day/person. By 2023, mobile data traffic is expected to reach 18 Exabytes per month in North America. Issues facing new data centers include the need for extremely fast channel Signal Integrity analysis of SerDes (25-100Gbps), PAM4 (56-112Gbps), Power Integrity (0.65V with 5% tolerance) and finally Thermal Integrity analysis including thermal stress in boards and components due to the increased power required to operate data centers.

Ansys has new electronics reliability tools that include an EMI scanner for EMC/EMI design rule check (in HFSS and SIwave) and electromigration analysis allowing calculation of Mean Time to Failure (MTBF) in addition to the existing thermal tools (Icepak in AEDT, Ansys Mechanical Thermal).

5G is shaping to be ‘the biggest thing in wireless since wireless’ as Dr. Williams states, with insight, breakthrough thinking, and innovation possible with simulation. 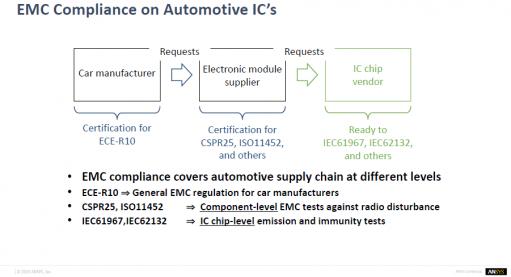 Dr. Chang closed by stating that moving forward Machine Learning and Deep Learning will be instrumental in enabling EM/Timing Assistants for reliability and timing check through an integrated ML stack also allowing for user-driven ML-Apps.