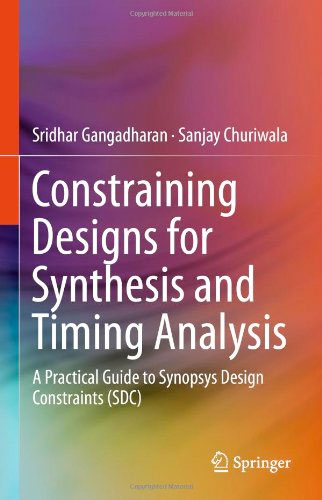 There is a new book out from Springer. The subtitle is actually a better description that the title. The subtitle is A Practical Guide to Synopsys Design Constraints (SDC) but the title isConstraining Designs for Synthesis and Timing Analysis. The authors are Sridhar Gangadharan of Atrenta in San Jose and Sanjay Churiwala of Xilinx in Hyderabad. The final chapter on Xilinx extensions to SDC was written by Frederic Revenu (not suprisingly, from Xilinx). Given the backgrounds of the authors, the book is equally applicable to SoC/ASIC designs and to FPGA-based designs.

As a totally off-topic aside I have actually been to Hyderabad several times. At Compass I set up a remote development group with a company called CMC (now part of Tata), which was originally set up to service IBM installations after IBM India was kinda nationalized in the 1970s. The weather is great at some times of year but at other times of year it is insanely hot.

The book is, as it says on the cover, a hands-on guide to timing constraints in integrated circuit design. You will learn to maximize performance of IC designs by specifying timing requirements correctly all within the context of SDC, which is, of course, the de facto standard format for specifying constraints. The book: