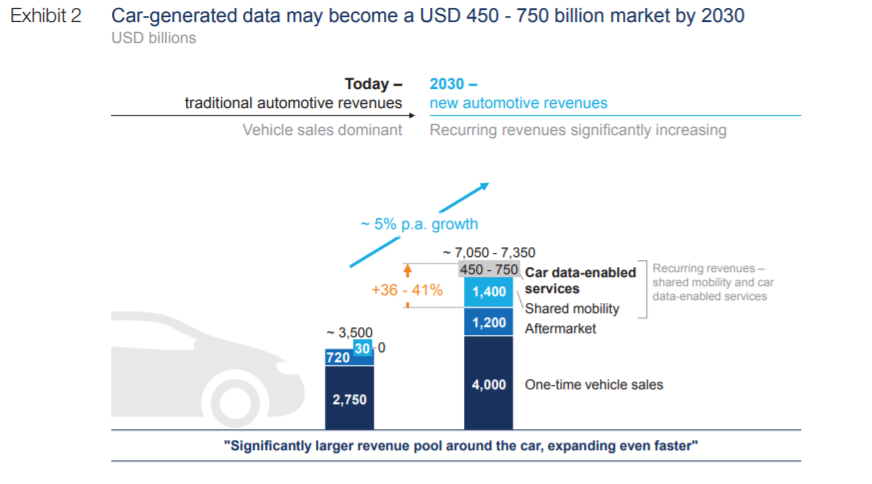 This report spawned dozens of internal car data initiatives at car makers and fueled the dreams of startups while draining the pockets of investors. Four years later the industry is still coming to grips with the meaning of the report and its impact – including the realization that a lot of that “value” was derived from prosaic matters such as customer retention and cost avoidance.

That being said, the effort to extract value from vehicle data is a noble if somewhat quixotic cause. The proposition was brought home this week when General Motors announced that its Super Cruise semi-autonomous driving function will require a $25/month subscription (or a $15 add-on for an existing OnStar subscriber). If vehicle data is so valuable, why on earth is GM CHARGING customers for the privilege of connectivity?

This begs the question as to why ANY car company is charging a subscription beyond anything more nominal than Tesla Motors’ $10/month premium connectivity package. Is access to Super Cruise worth more to the customer than an annual subscription to Netflix or Amazon Prime…combined?

I was watching a recording of Rupert Mitchell, chief strategy officer for WM Motor Technology Group Company of China, presenting at MOVE America last week in which he noted the importance of vehicle connectivity. Mitchell cites a newer McKinsey study of vehicle owners in China 61% of whom said they would switch brands for better connectivity.

Mitchell illustrated the importance of connectivity by describing how he got rid of the three-year-old Lexus hybrid that he used to drive in Hong Kong because when he was crossing bridges, such as the two-year-old Stonecutter’s Bridge in Hong Kong the satnav in his car showed him driving over water.

Mitchell’s experience reminded me of the I-35 bridge collapse in Minneapolis in 2007, which multiple map providers at the time struggled to account for in their navigation systems. Thirteen years later, the auto industry has yet to solve the bridge out problem largely because map providers and car makers haven’t solved the twin connectivity and map updating problem.

As the industry shifts – more rapidly than many originally thought – to electrified powertrains and in-dash systems powered by Google, vehicle connectivity will become even more essential. Consumers may be willing to pay something for some portfolio of services, but car makers must be mindful of what is lost where and when customers choose not to pay and prefer to disconnect.

Mitchell highlighted, near the end of his talk, his company’s use of “data walls” to represent live vehicle data with analytics from the company’s connected fleet of vehicles travelling throughout China. The WM Motor data wall (illustrated above) is not unlike similar data walls visible in the headquarters of most auto makers across China.

As I have noted in the past, Chinese auto makers produce nearly one third of all automobiles on the planet. (Don’t worry, only a tiny fraction of these vehicles are actually exported.) In spite of the enormous number of vehicles China is pouring onto its roads, the companies making those vehicles are increasingly focused on keeping track of every one of those vehicles and monitoring their performance and status. This is especially important for cars with electrified powertrains.

When Toyota announced a deal nine years ago with Microsoft Azure to build a connected car eco-system, I imagined Toyota CEO Akio Toyoda overseeing a global connected car command center where Toyota vehicles the world over could be monitored. Needless to say this did not happen and has not happened. In fact, Toyota has shifted its towering and as-yet unrealized cloud car plans to Amazon Web Services.

GM, too, has made many proclamations regarding its connected cars, and, yet, GM insists on charging customers for connectivity which has translated into a massive population of GM vehicles with inactive or only partially functioning on-board modems. GM may have a data wall of its own – but many of the cars in its network are not reporting their data.

WM Motor is but one in a growing cadre of Chinese car makers that are redefining the car driving and owning experience with connectivity. An idea that was born in the “West” – of connecting cars – has been most aggressively embraced in the “East.” Mitchell captures the value proposition most powerfully when he notes near the end of his talk that the data wall provides “a better idea on a real-time basis of the residual value of all of our cars on the road today.” What is that worth? $25 a month??