Background
The resistance of an interconnect line depends on the line length, cross sectional area and the resistivity of the material, see figure 1. 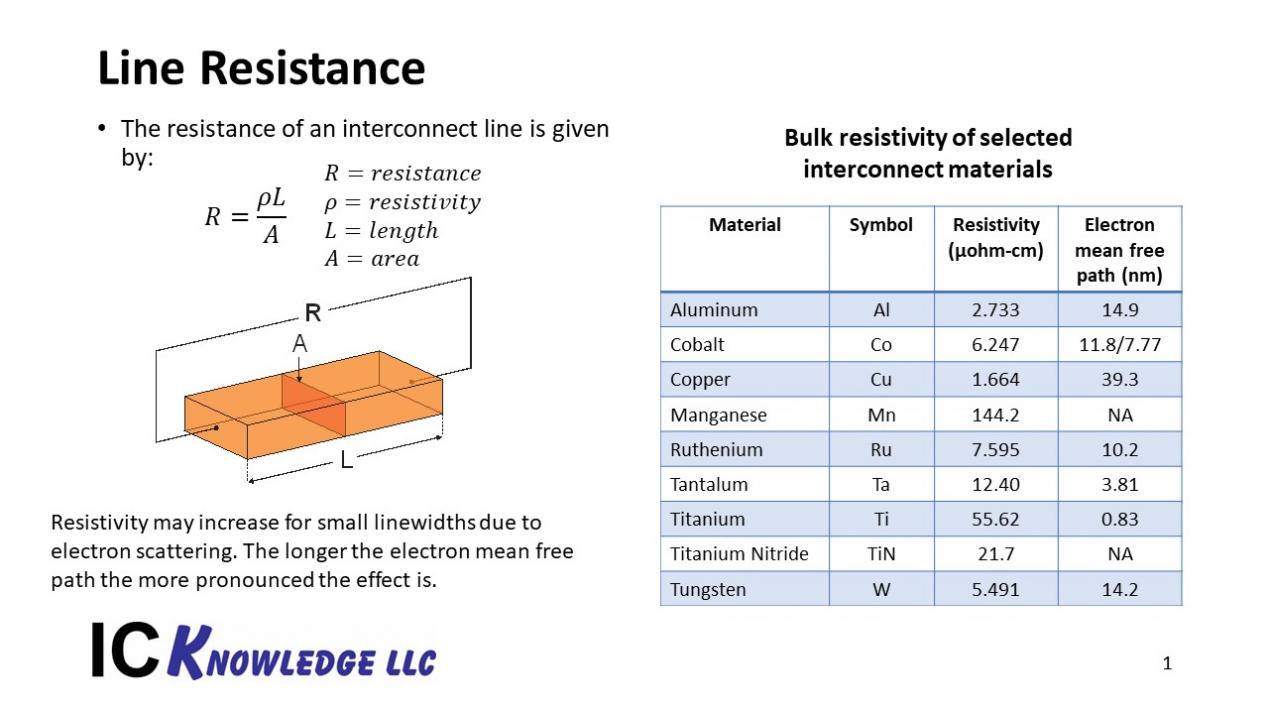 The other issue with copper is a barrier layer is required to prevent the copper from contaminating the rest of the structure. Barrier layers are made of materials such as Tantalum Nitride with very high resistivity and the barriers don’t scale down in thickness as the cross sectional area scales down, see figure 2. 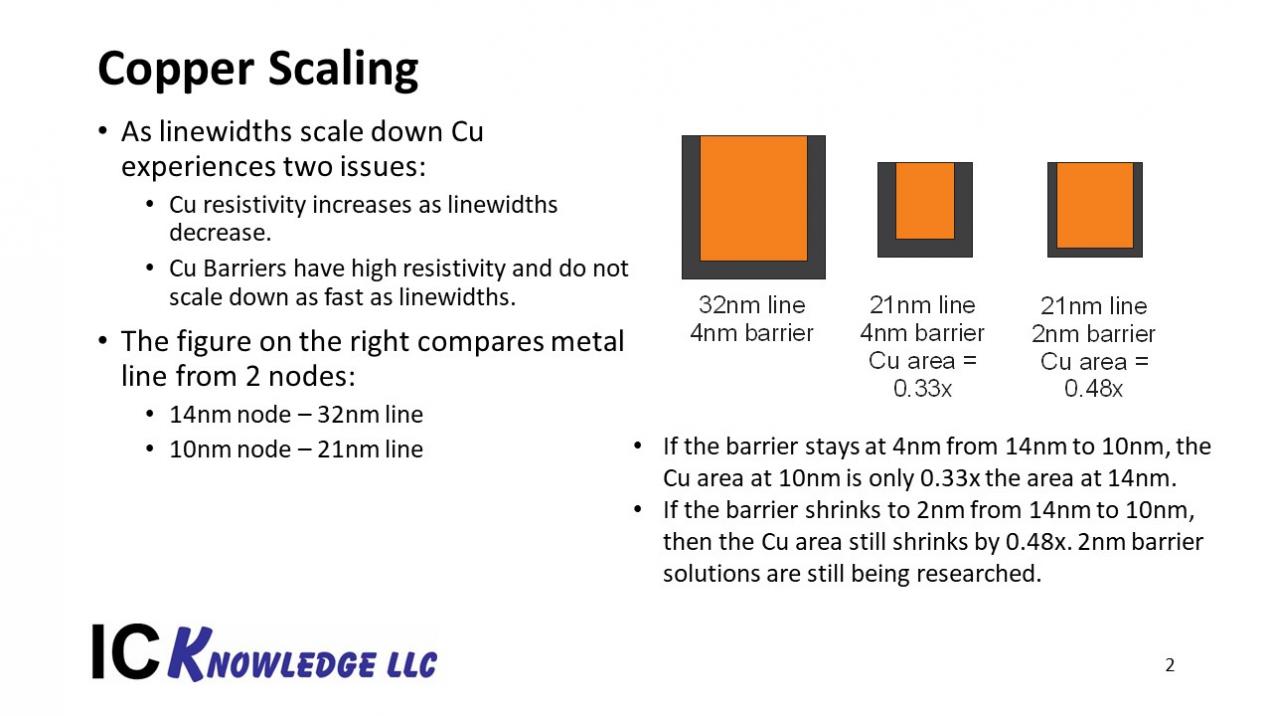 Currently copper barriers are around 2nm to 4nm in thickness with 2nm a lower limit. From the figure you can see that scaling from a 14nm node to a 10nm node reduces the copper cross sectional area to 0.33x for a 4nm barrier and 0.48x for a 2nm barrier.

The problems with increasing resistivity as linewidths shrink and barrier resistance open the door for other materials to displace copper at small linewidths if the resistivity doesn’t increase as much with cross sectional area and thinner or no barrier can implementations are possible.

Cobalt and Ruthenium are the two leading materials to replace copper at small dimensions.

Imec Line Resistance Results
Imec created 15nm trench openings on a 44nm pitch and then shrunk the trench width by depositing a conformal SiO[SUB]2[/SUB] layer using Atomic Layer Deposition (ALD). The resistance of lines created by filling the trenches with various were then measured. Figure 3 is the measured resistance of the lines. 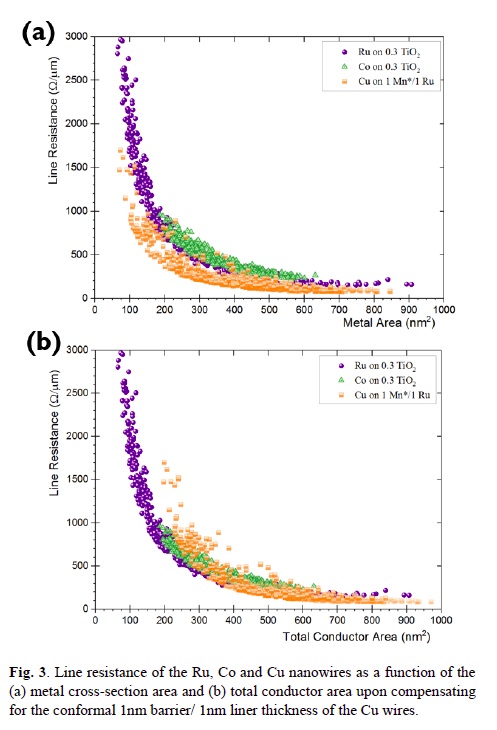 Figure 3 from the papers looks at copper with a 2nm barrier (the minimum achievable) versus cobalt and ruthenium with no barriers and 0.3nm adhesion layers. Cobalt and Ruthenium migrate less than copper and can be used without barriers (more on this later).

For a typical aspect ratio this is equivalent to an approximately 12nm linewidth. For advanced nodes there is a trend for critical interconnect layers to have wide lines and narrow spaces between the lines to minimize resistance. A 12nm line would be typical from something like a 16nm pitch, smaller than is likely to be required any time soon.

Via Resistance
For the lower level interconnects lines are relatively short and vias are common. Via resistance can therefore become a very important factor in interconnect resistance and barriers in vias contribute a lot of resistance. Figure 4 illustrates the via resistance versus critical dimension (CD). 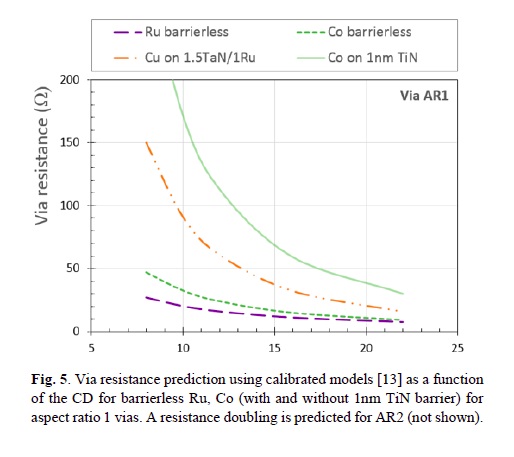 Figure 4. Via Resistance Versus CD
(figure 5 in the imec paper).

Figure 4 compares ruthenium with no barrier, cobalt with no barrier, cobalt with a 1nm titanium nitride barrier and copper with a 1nm ruthenium barrier and 1.5nm tantalum nitride barrier. At all CDs ruthenium and cobalt outperform copper. It has been found that barrier-less cobalt is only usable with dense inter level dielectric layers so some barrier may be required depending on the ILD. Ruthenium does not require a barrier at all.

Currently cobalt has been implemented by some companies for contacts at 7nm and Intel is using cobalt interconnect for soem levels for their 10nm (roughly equivalent to foundry 7nm) technology. Ruthenium has the best via and interconnect resistance at small dimension but is very difficult to process.

Discussion
Taking line resistance, via resistance and electromigration into account imec draws the line at around a 40nm pitch for cobalt or ruthenium to outperform copper.

Imec is working on a barrier-less cobalt solution with dense low-k iILD materials, electromigration performance is good but without a barrier cobalt does intermix with copper where the two materials come into contact at high interconnect levels.

Ruthenium doesn’t need a barrier but CMP of ruthenium is still problematic.