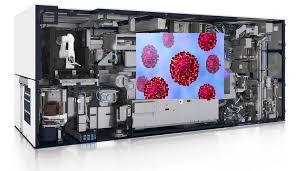 Results were in line after correcting Covid Caused Revenue Rec issue-
ASML reported revenues of Euro3.3B and EPS of Euro1.79 as revenues from two EUV systems was not recognized, due to Covid related issues and delays, causing the miss. Had the systems been recognized, revenues would have been in line with expectations of Euro3.6B and EPS obviously would have been more in line as well

Guidance for Q3 is revenues between Euro3.6B and Euro3.8B which may be a liitle less than what was otherwise hoped for but still in reasonably good shape despite the Covid Crisis.

Order drop is more concerning
After having a string of strong order quarters, orders dropped in the second quarter to Euro1.1B, or less than a third of sales reflecting a very low book to bill ratio. Perhaps even more concerning was that only 3 EUV tools were ordered in the quarter accounting for Euro461M of the orders

We had reported several weeks ago about TSMC pushing out equipment orders and the drop in orders could be partially due to this. Orders were roughly balanced between memory and logic but perhaps more due to logic falling off more than memory gains as the overall number was very low.

The order fall off is likely due to a number of factors but uncertainty about the economic outlook due to Covid related issues is clearly the chief concern. We have been talking about an H2 fall off since the beginning of the Covid Crisis as we expected the trickle down impact economic to extend into the fall.

Given that litho tools are the last thing that a fab wants to cancel due to the very long lead times, this could have a more ominous impact on other tools, such as dep and etch which are more of a turns business and could more easily be canceled or pushed out than litho tools

Could we be seeing EUV “digestion” or pause as well?
Aside from the obvious Covid and economic concerns we could also potentially be experiencing a digestion period for the slew of EUV tools that were ordered and shipped as EUV turned into an HVM tool set.

Now that many fabs are in production perhaps we are also seeing a pause or digestion of the first round of EUV tools that everyone implemented into their process flow.

In any event, backlog is a wonderful thing, as it helps smooth out the ebbs and flows and lumpiness of orders of big ticket items. ASML has a very strong order book/backlog looking at 54 systems which helps keep production and revenues more steady even though it may not prevent revenue recognition hiccups.

Other long lead time tools makers such as KLA also have the luxury of long order books smoothing out a lumpy, seasonal, cyclical business. We would not be surprised to see order drop offs from other tool makers as we approach H2

Long term picture and EUV technology remain very much on track
Despite the revenue miss and order drop, we see no change in the dynamics of EUV adoption and technology advancement. ASML also announced a new dry DUV tool in the quarter as well as shipping their first multi beam wafer inspection tool obviously aimed at KLA.

Further improvements and refinements of EUV source technology were evident with the tin refill capability discussed. The company is also pioneering an augmented reality service tool to help deal with Covid 19 service issues we have detailed in the past

The Stocks
As we would expect, ASML’s stock will be down due to a combination of the financial miss coupled with the weak order book which portends the uncertainty of the market. Other semiconductor equipment stocks will likely be weaker in anticipation of similar cause for concern in H2 business and potentially worsening business environment for chip equipment.

We wouldn’t lose all that much sleep as the valuations of these semiconductor equipment names and other semi names have been on fire with valuation multiples reaching all time highs despite an ugly economic environment fraught with uncertainty.

We could see more air come out of high flying semi stock valuations as quarterly reports will not reflect the stocks strong performances.

One Reply to “ASML More Covid Concerns and Impact”