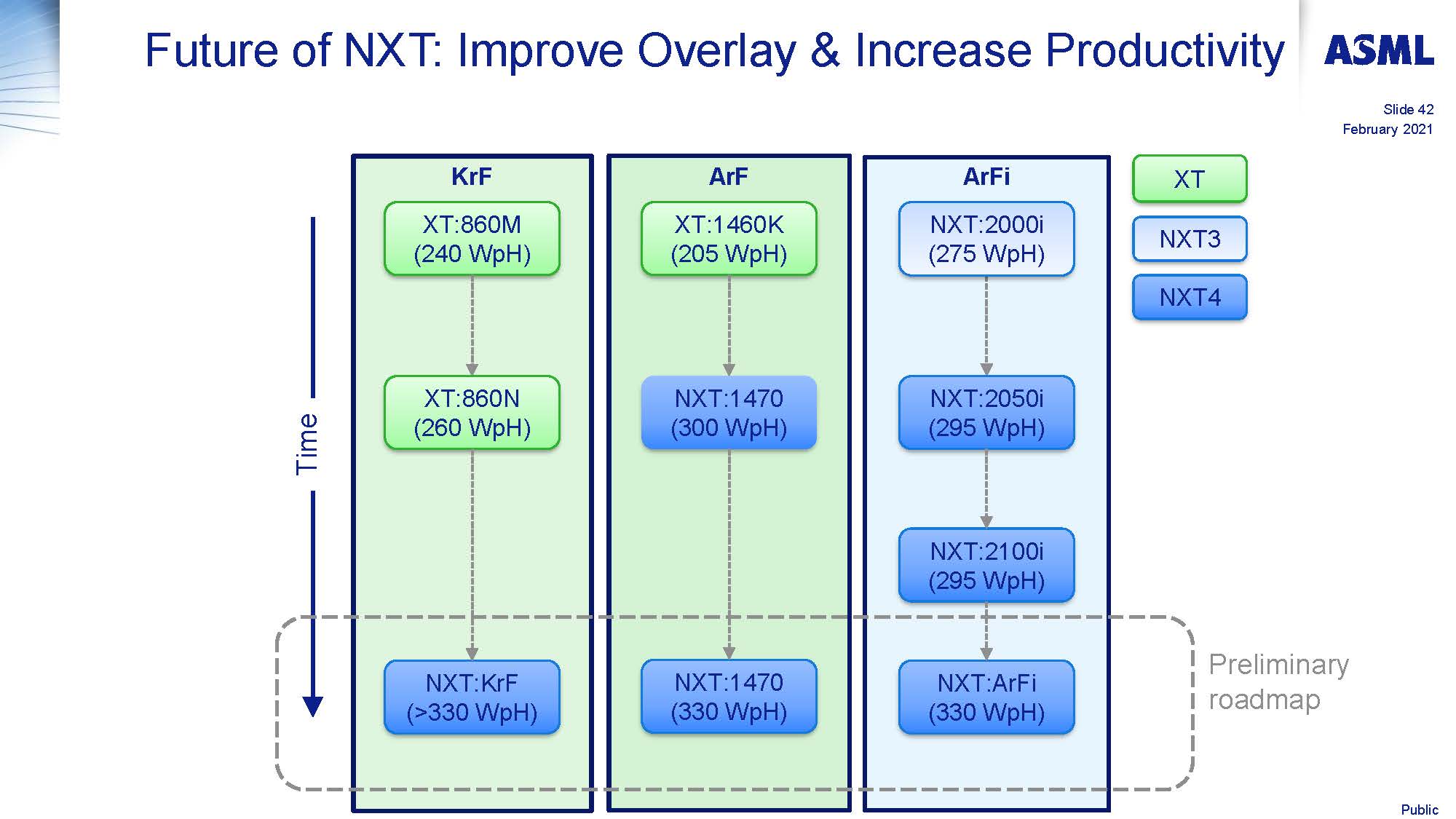 At the SPIE Advanced Lithography Conference held in February, ASML presented the latest information on their Deep Ultraviolet (DUV) and Extreme Ultraviolet (EUV) exposure systems. I recently got to interview Mike Lercel of ASML to discuss the presentations.

Despite all the attention EUV is getting, most layers are still exposed with DUV systems and this will likely continue to be true for the foreseeable future.

ASML has had two DUV platforms in production, the XT platform for dry exposure tools and the NXT platform for immersion. The NXT is the faster and more sophisticated platform.

ASML is now taking the NXT platform and porting dry lenses onto it with the first system the NXT:1470 for ArF dry offering 300wph (slightly faster than the NXT:20250i because it does not have the immersion overhead). The 300 wph for the NXT:1470 is up from approximately 200 wph for the XT:1460K. In the future the NXT:1470 will have further throughput improvements to 330 wph (see figure 1).

There are also plans to port a KrF dry lens to the NXT platform with 330 wph planned (see figure 1).

With the standard 0.33 numerical aperture (NA) systems in use at Samsung and TSMC for 7nm and 5nm logic production and at Samsung for 1z DRAM, the number of wafers exposed with EUV is growing rapidly (see figure 2). 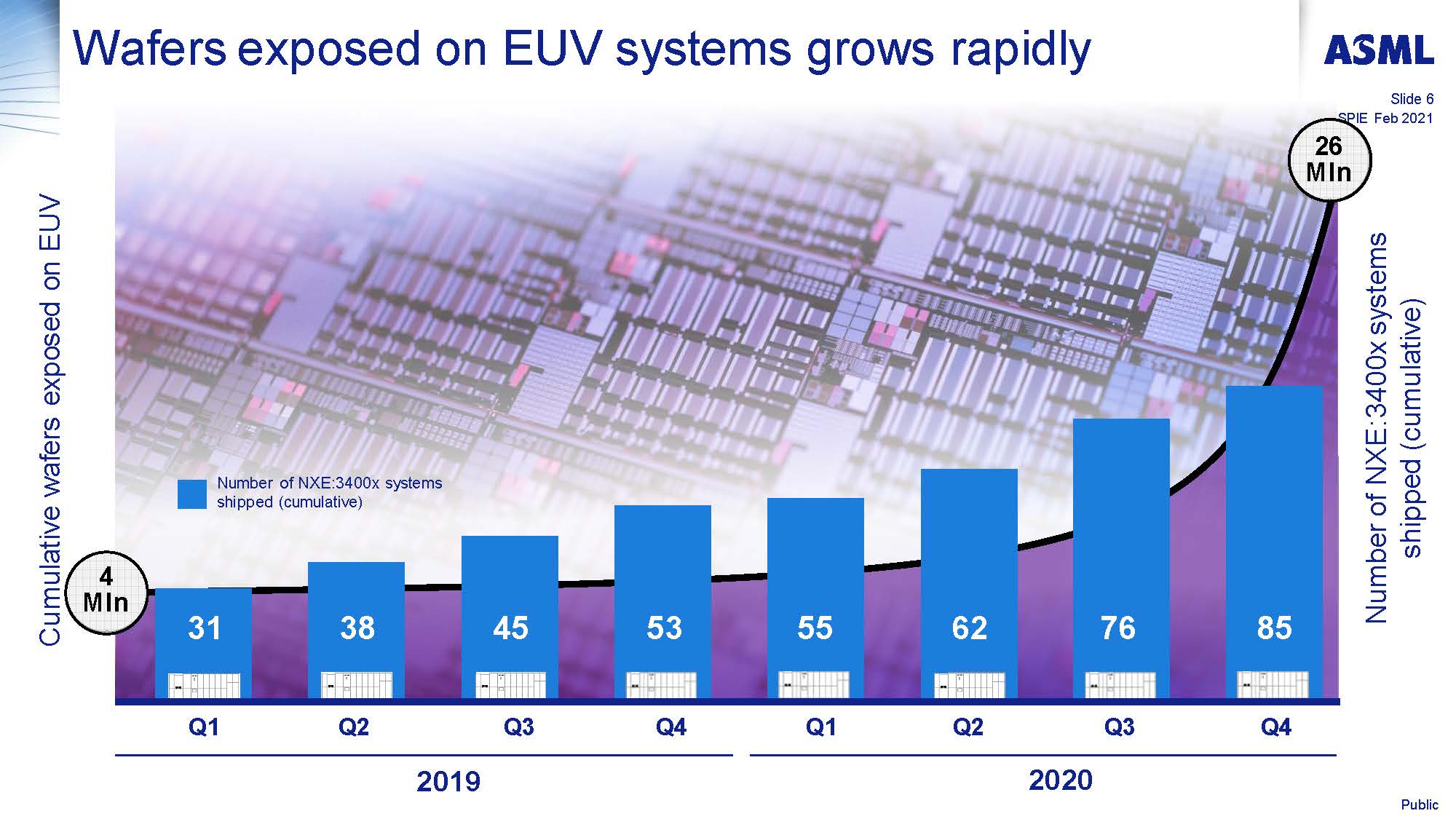 Figure 2. 3400x EUV Systems in the Field and Wafers Exposed.

The NXE:3400C system has been shipping since late 2019 and the new NXE:3600D should start shipping later this year. Each new system provides improved throughput and overlay.

Figure 3 presents a summary of both 0.33 NA and High-NA 0.55NA systems to be discussed in the next section. 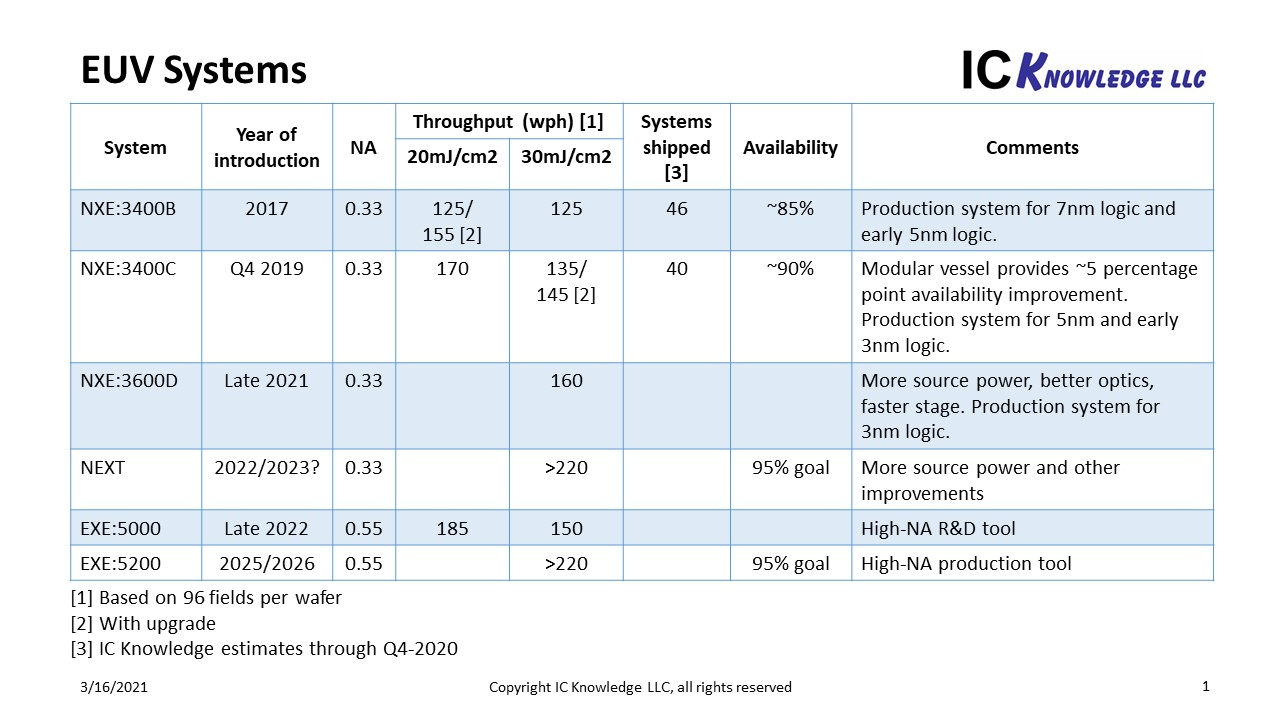 A key enabler for EUV of dense patterns is the availability of a pellicle, there is now a usable pellicle available. Pellicles use reduces throughput and whether a pellicle is used or not depends on the pattern density being printed. Figure 4 presents the state of EUV pellicle transmission. 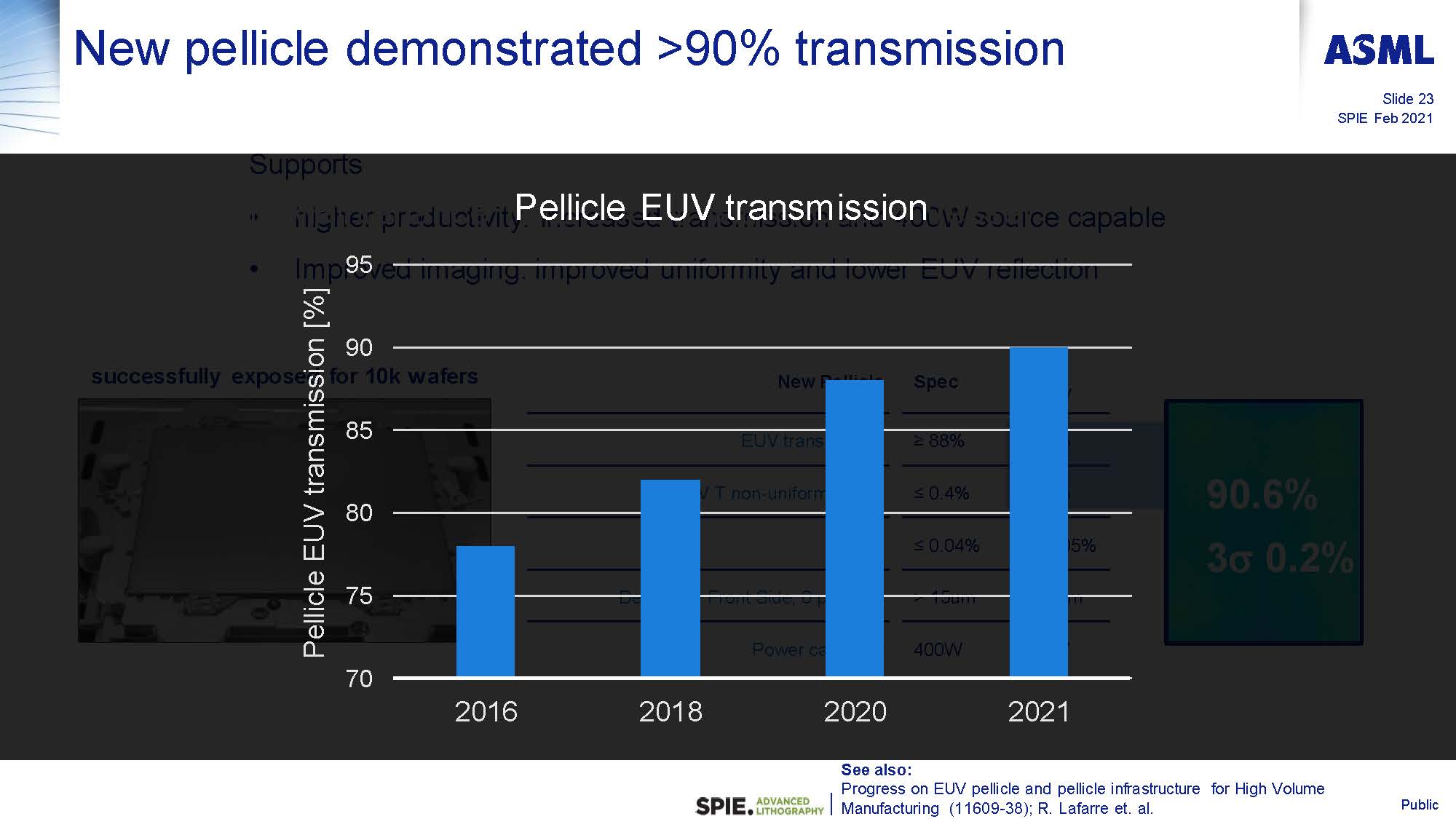 There is currently some pellicle use in production.

High-NA has now progressed from PowerPoint slides through engineering design to building modules and frames. The first High-NA tools (0.55NA) are expected to ship in late 2022. These EXE:5000 systems will likely be used for research and development with the EXE:5200 systems due in 2025/2026 being the first high-NA production systems (see figure 3). 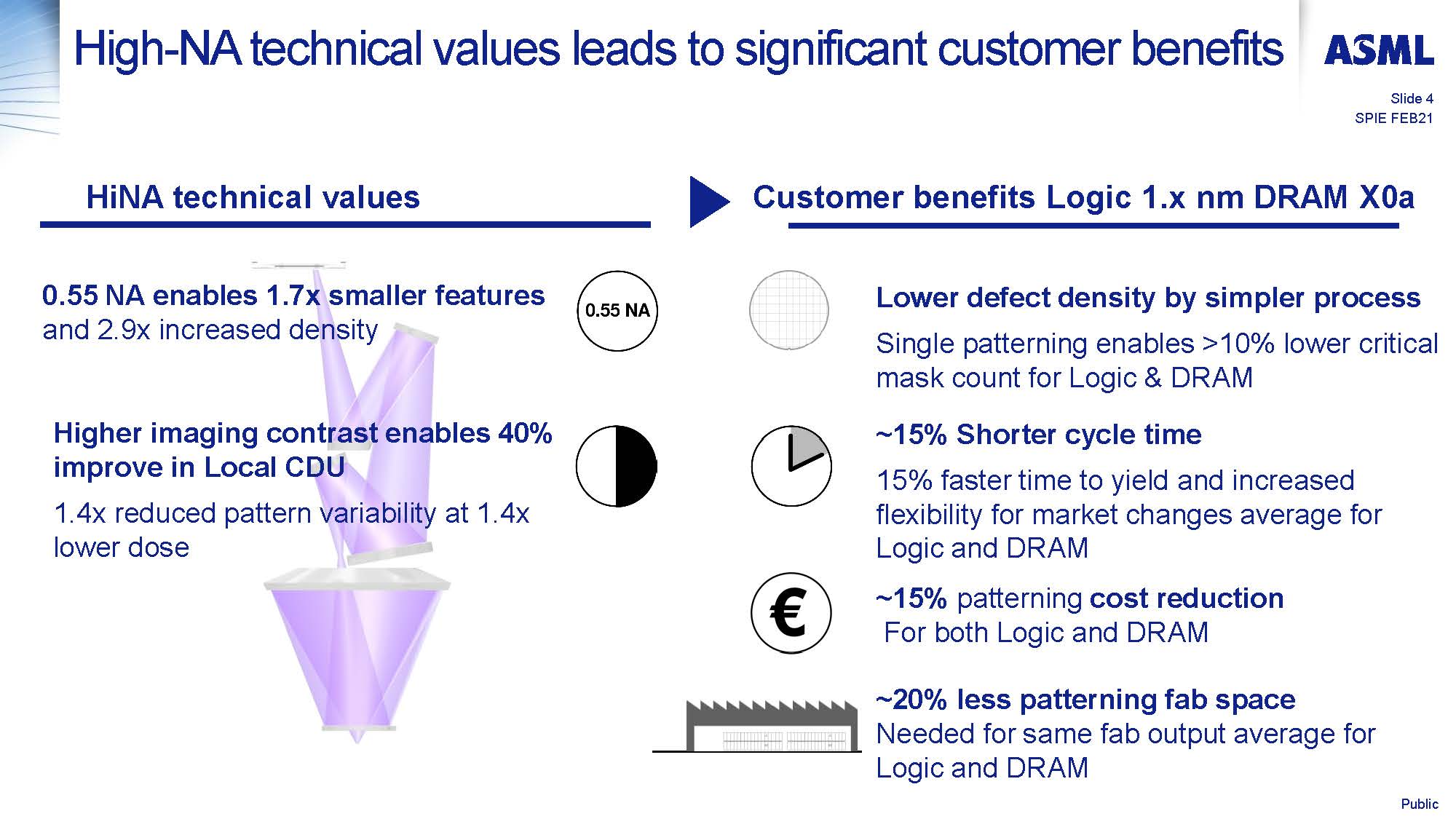 One other value to 0.55NA EUV is that the higher contrast can print dense features with a much lower dose than 0.33NA EUV improving throughput (figure 3 is throughput for specific doses and does not consider dose reduction). Figure 6 illustrates the 0.55NA advantage. 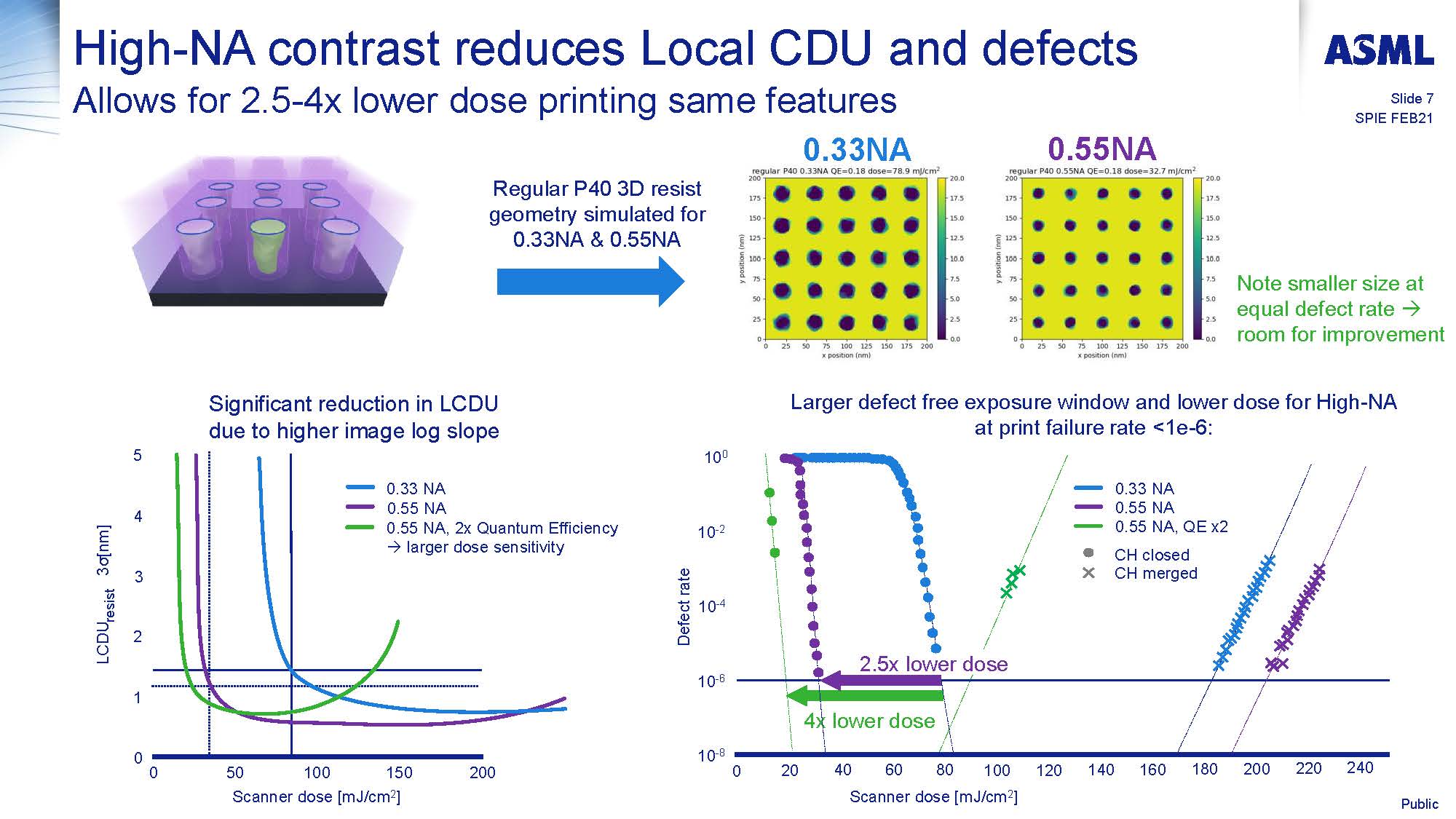 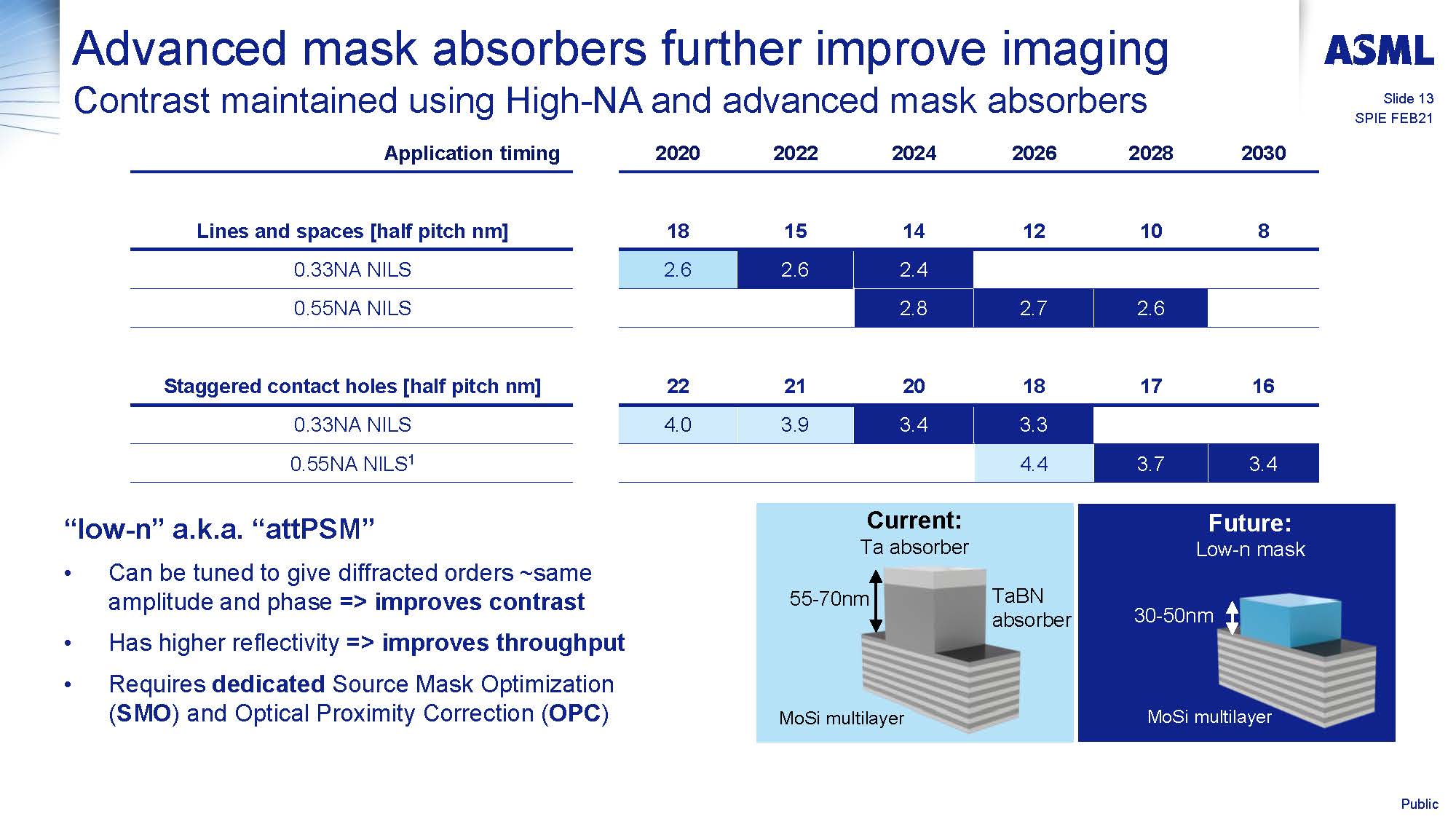 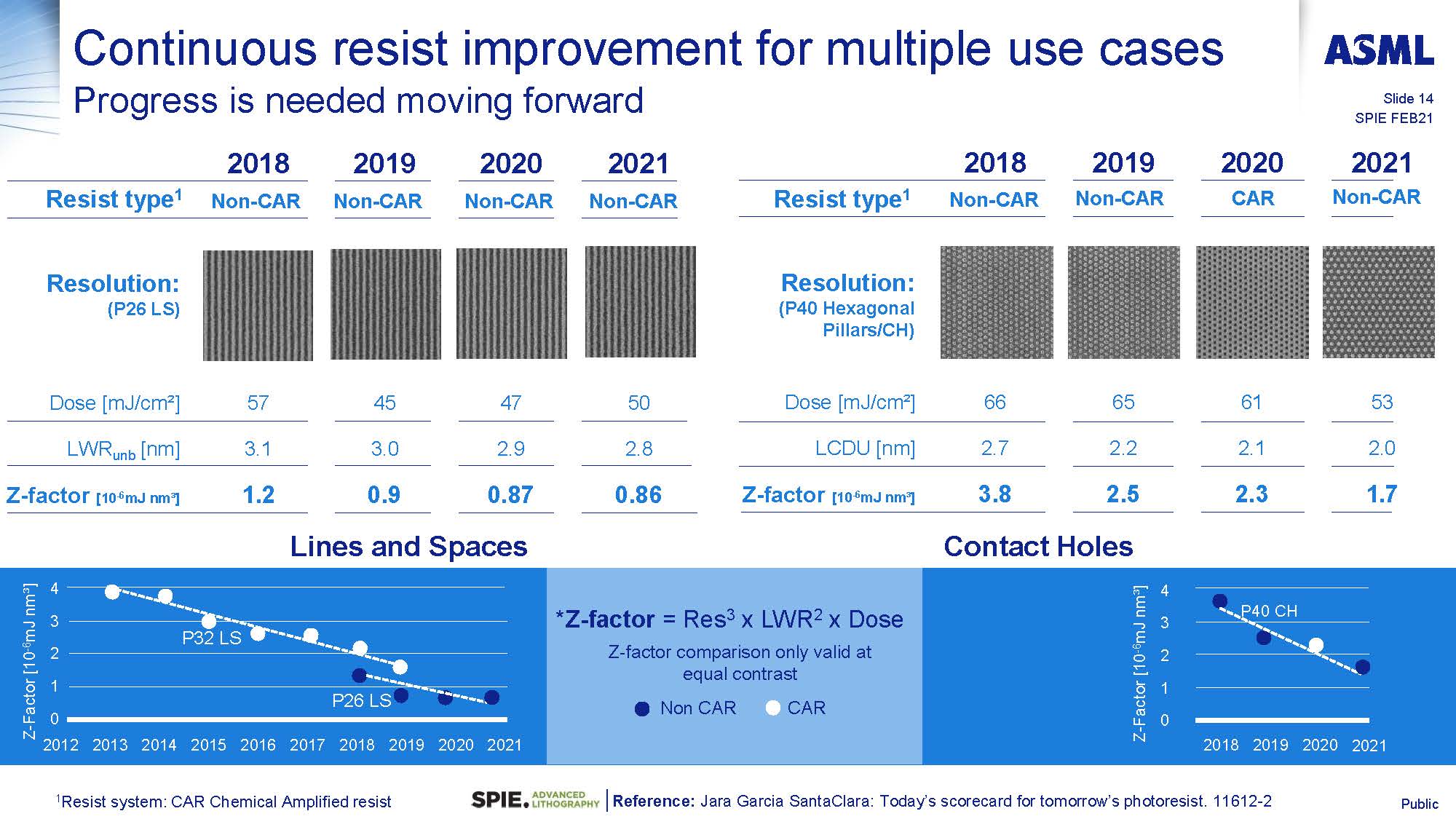 Currently modules and frames for high-NA tools are being fabricated.

ASML continues to drive throughput and resolution across their entire portfolio of DUV and EUV systems. With High-NA system manufacturing underway, a path to 1.5nm logic and beyond is underway.