Denali acquisition by Cadence in May 2010, ChipIdea, Virage Logic, and nSys acquisitions by Synopsys in 2009, 2010 and 2011 (resp.) shows that IP market is consolidating… but new IP vendors are still emerging! So we need to know on which product the Interface IP market leader will tend to a dominant position, which new products will be added to their port-folio, what could be the new strategy from the well known EDA challenger in Interface IP and Verification IP, and get information about the new comers, or IP vendors start supporting emerging protocols…

The use of High Speed Serial Interconnect instead of parallel interface is becoming the preferred solution for new products developed across various segments. In this survey, we study the Interface IP market, looking at all the existing protocols: PCIe, USB (HS & SuperSpeed), Serial RapidIO, Infiniband, Hyper Transport, SATA, Fibre Channel, HDMI, Ethernet, XAUI, Display Port, MIPI and DDRn, and extracting the most promising in term of long term growth. To understand the market, we first analyze for every selected IP segment, the market share, growth rate and positioning of the different vendors, for 2005-2010. Then, we propose a market forecast on the period 2011-2015.

We can see on the above picture the negative impact of the Q4 2008-Q1/Q2/Q3 2009 recession on the growth rate for every segment – except DDRn Memory Controller. Even if in 2010, the market has recovered, we should come back to 20-30% like growth rate only in 2011. In the survey, we have made an analysis, by protocol standard (USB, USB 3.0, PCIe, SATA, DDRn, HDMI) of the market evolution from 2005 to 2010, detailing the revenue by vendors, like we can see on this example for PCIe IP:

What will happen in the future depends, as always, of the health of the global economy. Assuming no catastrophic event, 2010/2011 growth should continue in 2012, and the interface IP market should reach a $350M level, or be 58% larger than in 2009 (a 17% CAGR during these 3 years). The reasons for growth are well known (at least for those who read Semiwiki frequently!): the massive move from parallel I/Os to high speed serial, the ever increasing need for more bandwidth, not only in Networking, but also in PC, PC peripheral, Wireless and Consumer Electronic segments – just because we (the end user) exchange more data through Emails, Social Media, watch movies or listen music on various, and new, electronic systems. Also because these protocols standards are not falling in commoditization (which badly impact the price you sell Interface IP), as the various organizations (SATA, USB, PCIe, DDRn to name the most important) are releasing new protocol version (PCIe gen-3, USB 3.0, SATA 6G, DDR4) which help to keep high selling price for the IP. For the mature protocols, the chip makers expects the IP vendors to port the PHY (physical part, technology dependant) on the latest technology node (40 or 28 nm), which again help to keep price in the high range (half million dollar or so). Thus the market growth will continue, at least for the next three to four years. 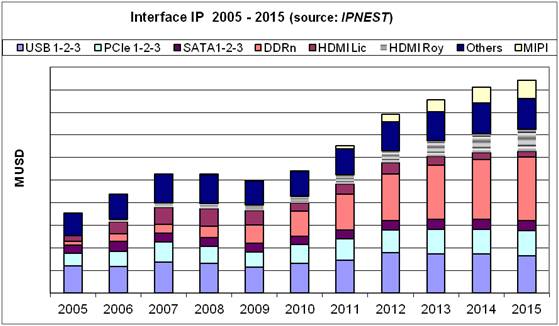 On the long term, the Interface IP revenue is expected to double on 2015/2009 periods, going from $220M in 2009 up to $450M in 2015, growing at a 12.4% CAGR. In the same period, the Semiconductor market, like any mature market, will tend to rationalize his sourcing strategy. Instead of having to select a different IP vendor for every different interface standard, or even for the PHY and the Controller for a given standard, an IDM or Fabless will prefer the one stop shop concept, at least for a family of IP like the wired Interface IP. This one stop shop concept will be extended to Verification IP, to be offered by traditional IP vendors.

As of today, there is one market leader: Synopsys. Instead of inventing a standard, or to invest upfront, the company has grown through successive acquisition of small, focused and successful IP vendors. This is true with USB, PCIe, DDR and HDMI! And they are now number one and ultra dominant in USB, dominant in PCIe, number one in SATA, number one in DDRn, and starting in HDMI and MIPI. Their key strength is their worldwide direct sales network, able to reach every design team in the world (thanks to their logic synthesis tool), and their ability to provide each of the Top 5 standard based IP. Initially, the one stop shop concept was developed by “generic IP” vendors, like CAST, to sell commodity functions. Since 2009, we can see Synopsys as the one stop shop company selling highly specific, complexes Interface IP like USB 3.0, PCIe Gen-3, SATA II and III, HDMI and DDR3. Thus we expect Synopsys to lead this market in 2015, like they did it in 2009, where they enjoyed $83M or 38% market share on Interface IP or 2010 with $100+ million and more than 40% market share.

Is there is room for another IP vendor competing with Synopsys?We think there is still room for another IP vendor to compete on the Interface IP segment (the market does not like to have such a reduce choice). In the past, Mentor Graphics has tried to build an IP port-folio, to finally exit the market. Nevertheless, two EDA vendors (Cadence and Mentor Graphics) have a key strength that you absolutely need to be successful on the IP market: a worldwide sales force able to have access to almost every design team in the world. They also get enough cash to grow by acquisition (like did Synopsys, in fact)! Such a new comer should remember that he will have to provide an integrated solution. This means he will have to manage both the Digital (Controller) part of the IP and the Analog (PHY) and probably also the software drivers. Talking about Cadence, if they want to be present on this IP market which represent already several $100M and will grow at a 12% CAGR from 2010 to 2015; we would expect a next step after Denali acquisition! It would be to acquire one (or several) IP vendor strong in Interface IP in general (Denali is strong in DDRn but very weak everywhere else) and be able to propose a wide PHY IP port-folio. They could develop a PHY product line from scratch, but this is far to be the easiest way.

Finally, what could be the challenges for the wired interface IP market itself?We have seen that the decline in ASSP/ASIC design starts, which is real, is more than compensated by two distinct effects. The SoC proportion of ASIC/ASSP is enough growing and generating new needs for Memory Interface and High Speed Serial Interconnect to compensate this decline. The second effect is the high demand for Data bandwidth in the PC and Consumer Electronics markets, which can only be satisfied by moving from the old, parallel based, interconnect link to the High Speed Serial Interconnect. The availability of serial protocols, like USB, PCIe, HDMI, MIPI and SATA, allows the pervasion into multiple applications, in various market segments, so the number of design starts including these IP is growing. Finally, the emergence of ThunderBolt, promoted by Intel, could perturb the market, probably not now but in the mean term. If this standard is really used, what will happen to the PHY IP vendors for protocols like USB 3.0, HDMI or eSATA? As a matter of fact, the decision from Intel to delay up to Q2 2012 the integration of USB 3.0 into the PC chip set was not good news for the USB 3.0 IP vendors.

Another challenge could be the relationship between the IP vendors and the Silicon foundries. In fact, the interface IP, and more specifically the PHY IP, has become a function present in almost every design, which can be seen by the foundries as a hook to keep a customer locked with their technology. The FPGA vendors were the first to understand it, and they license IP not to generate IP sales, but to lock their customer to their technology. It will be interesting to monitor what will be the strategy of the Silicon foundries in respect with the (PHY) interface IP vendors in the future.