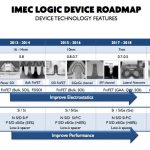 Recently imec and Cadence disclosed that they had fabricated 5nm test chips. This afternoon Dan Nenni and I had a conference call with Praveen Raghavan, principal engineer at imec, and Vassilios Gerousis, distinguished engineer at Cadence to get more details on what the test chip is and what was learned.

I’m an An Steegen groupie. Once or twice a year I see a presentation by her and it is a great summary in a ridiculously short period of time of all the potential upcoming semiconductor technologies. Yesterday was my annual fix at the imec Technology Forum (ITF). Today I got to sit down with her at the conference center.

An is different… Read More

Pretty much out of nowhere UMC let fly a press release about taping out a 14nm test chip with ARM and Synopsys IP which was quickly followed by an SMIC 14nm press release about a joint venture with Huawei, Qualcomm, and imec. It caught me a bit by surprise since I spent time with both UMC and SMIC at #52DAC and nothing was mentioned. Of course… Read More

I’m at the 2015 imec technology forum (ITF) in Brussels the next few days. One of the presentations today was by Peter Wennink, the CEO of ASML. The thing that most interested me in his presentation is what the status of EUV is today. ASML is the only company developing EUV steppers so what they think is important. On the other … Read More

SEMICON West is coming up July 14-16th. As always it is in San Francisco at the Moscone Center. Why should you go? Because SEMICON West attracts more than 30,000 professional attendees representing the leading global technology companies, including IDMs, foundries, fabless, contract packaging and test houses, OEMs, materials… Read More

I like to quiz people on which country is the one where the most leading edge research on semiconductors is done. People reflexively answer USA or maybe Taiwan or Japan. Nobody who doesn’t already know the answer would pick Belgium. After all the EU headquarters is there not because Belgium is important but because Belgium… Read More

Rumor that Intel has quit Sematech confirmed by website?
Potential industry impact-
Is this a consolidation by-product?
Do we need a trade group?
Does it benefit Intel?

We have heard from several sources over the last few days that Intel has quit Sematech, the semiconductor industry trade group focused on technology development… Read More