While the ASIC market has always had its advantages over alternate solutions, it has faced boom and bust cycles typically driven by high NRE development costs and time to market lead times. During the same time, the FPGA market has been consistently bringing out more and more advanced products with each new generation. With very… Read More

WEBINAR: 5G is moving to a new and Open Platform O-RAN or Open Radio Access Network
by Daniel Nenni on 06-10-2022 at 6:00 am
View Profile
View Forum Posts 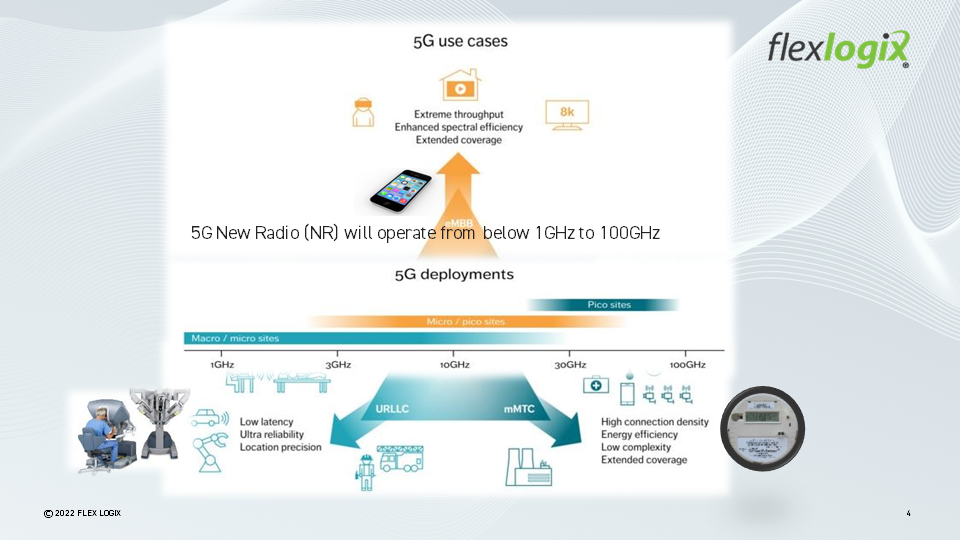 The demands of 5G requires new designs to not only save power but also increase performance and by moving to advance power-saving nodes and by using eFPGAs will help to achieve these goals. This paper will introduce 5G and O-RAN, the complexity of these systems, and how flexibility could be beneficial. Then we will dive into how eFPGA… Read More

A Flexible and Efficient Edge-AI Solution Using InferX X1 and InferX SDK
by Kalar Rajendiran on 11-18-2021 at 6:00 am
View Profile
View Forum Posts

The Linley Group held its Fall Processor Conference 2021 last week. There were several informative talks from various companies updating the audience on the latest research and development work happening in the industry. The presentations were categorized as per their focus, under eight different sessions. The sessions topics… Read More

Dan and Mike are joined by Dana McCarty, vice president of sales and marketing at Flex Logix Technologies, Inc. Using an eFPGA-based architecture for processing AI workloads is discussed, along with typical applications and power, performance and cost benefits. The competitive positioning of Flex Logix’s InferX X1 … Read More

Using eFPGA to Dynamically Adapt to Changing Workloads
by Kalar Rajendiran on 04-22-2021 at 10:00 am
View Profile
View Forum Posts

In early April, Gabriele Saucier kicked off Design & Reuse’s IPSoC Silicon Valley 2021 Conference. IPSoC conference as the name suggests is dedicated to semiconductor intellectual property (IP) and IP-based electronic systems. There were a number of excellent presentations at the conference. The presentations had been… Read More

Podcast EP15: The Birth of Dynamically Reconfigurable Computing
by Daniel Nenni on 04-09-2021 at 10:00 am
View Profile
View Forum Posts

Dan and Mike are joined by Geoff Tate, founding CEO of Flex Logix. Geoff has a storied career in semiconductors that includes over ten years at AMD, ending as senior VP, microprocessors and logic. Following AMD, Geoff was founding CEO of Rambus, growing the company from four people to IPO with a $2 billion market cap.

Flex Logix is a unique company. It is one of the few that supplies both FPGA and embedded FPGA technology based on a proprietary programmable interconnect that uses half the transistors and half the metal layers of traditional FPGA interconnect. Their architecture provides some rather significant advantages. I wrote about their… Read More

eFPGA is now widely available, has been used in dozens of chips, is being designed into dozens more and it has an increasing list of benefits for a range of applications. Embedded FPGA, or eFPGA, enables your SoC to have flexibility in critical areas where algorithm, protocol or market needs are changing. FPGAs can also accelerate… Read More

We started working with Felx Logix more than eight years ago and let me tell you it has been an interesting journey. Geoff Tate was our second CEO Interview so this is a follow up to that. The first one garnered more than 15,000 views and I expect more this time given the continued success of Flex Logix pioneering the eFPGA market, absolutely.… Read More