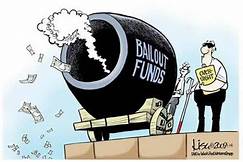 -A repeat of the auto industry bailout of self inflicted issues?
-Not just money but systemic change is needed
-Perhaps chips need an Elon led revolution like autos & space
-Govt $ need focus not thrown into existing spend avalanche.

Are chips a replay of the auto industry bailout a decade ago? Deja Vu all over again.

The US auto industry had been the pinnacle of US manufacturing that saw its fortunes decline as manufacturing moved overseas to more nimble and innovative foreign competitors amid US industry complacency.

This culminated on the precipice of failure of two of the largest companies that was only staved off with an injection of taxpayer cash.

The almost failures were clearly self inflicted if not just poor management.
Over $80B of TARP money was injected by the government over a decade ago.

The results are clear, the industry was saved from collapse and has prospered since their reprieve but it has taken an outsider to truly re-invigorate the industry.

We think that the auto industry bail out is likely a good model for what could be in store for the semiconductor industry.

The very significant difference is that the chip industry is in the middle of a “shortage” induced boom while a decade ago the auto industry had seen demand drop off a cliff.

Both were very different inflections in their respective industries that have caused a need for “re-shoring”, re-invigoration and national security as well as business security.

One of the semiconductor companies that is likely at the head of the line with their hand out is Intel. The recent 60 minutes interview brought their case to the publics attention.

Intel had been the clear leader in technology and the shining example of US manufacturing technology, perhaps a bit like General Motors.

Intel has a series of missteps in technology and diversions that caused it to lose its leadership position.

Intel is now playing a game of “catch-up” which is a lot more difficult than “lead from the front”.

Intel has been reduced to getting chips made by the company that beat them, TSMC. This is somewhat akin to GM going to Toyota to help build cars much as they did in Fremont at the now, paradoxically, Tesla factory….

So the question at hand is should the government give taxpayer Billions to a company (Intel) that failed in the race that it itself defined, to get back in that race? In addition its not like the company is losing money as GM did, Intel is still making lots of Billions. Seems like an unfair subsidy as TSMC hasn’t seen similar help.

How does this work???

One of the other companies potentially in line for funding is Global Foundries. Much like Intel, they were in the Moore’s law race and simply gave up through a combination of lack of success and cut off of funding from Abu Dhabi, their owners. It was not unfair competition or external factors it was all management driven. It was euphemistically called a “pivot” instead of a failure.

Now the Abu Dhabi is looking to recover as much money as they can by spinning off ownership to the public through an IPO.

The question is should US taxpayers be funding a bailout out of both a failed business as well as a foreign entity?

The timing could potentially be suspect as GloFo is looking to do an IPO shortly and a government handout would be in essence an “underwriting” of the IPO to benefit both the owners (Abu Dhabi) and investors.

Maybe it would be simpler for the US government to simply send a check to the Abu Dhabi government rather than wash it through GloFo.

Equity or Debt is better than a gift

Much as with the auto bailout, we think the only fair way to help out the industry is not through a gift or grant but rather an investment through either debt or equity or both. In this way taxpayers have a chance of getting paid back or maybe even making a profit, again like the auto bailout.

It also gives the government a little leverage in the way the money is spent or at the very least an observer seat at the table.

We think grants and gifts are suitable to start ups and new technology to foster R&D in semiconductors but not to profitable, ongoing , billion dollar businesses.

We think that industry consortiums of interested parties are one of the better ways to support the industry.

However, we would be less positive on non-profit industry consortiums like Sematech as they don’t have the focus that profit driven, public companies have.

It would also be best to have a vertical spectrum of interested parties involved in the solution from customers like Apple, Nvidia, Qualcomm, etc to chip makers like Intel, Micron, Skywater etc and equipment makers like AMAT , Lam and KLA.

All of these companies have a very keen interest in “re-shoring” of the semiconductor industry and maintaining leadership within the US. One such consortium is in discussion for New York State.
We think a united effort is better than throwing money at individual companies.

Its not just Money

While everyone’s focus is on the money (as it should be…) we can’t forget that there are other things that can support the re shoring of the chip industry.

A very valid point that has been made by Morris Chang, the founder of TSMC is focus on the educational system and the available talent pool needed for the semiconductor industry and specifically to run fabs.

One of the difficulties GloFo had was getting talented people to move to upstate NY. The semiconductor equipment companies, all California based, have a better time, but still not easy, attracting talent.

It starts with the educational system and engineering schools and technical training. It also has to do with mindset. People in the US tend to look down on factory workers and fabs are factories. The turnover is US fabs is much higher than foreign fabs.

Engineering is not what it used to be in the US (I feel a bit like a dinosaur having an engineering degree). Germany and other Western nations have done a good job of staying ahead on basic technology talent and the US needs to both re-focus and re-invest in the technology education system. that supports the semiconductor industry.

It also goes without saying that state and local governments need to be more factory friendly. Semiconductor factories don’t belch smoke into the sky nor pollute water yet we don’t see factories coming back to silicon valley.

Throwing snowballs in an avalanche

There is a virtual avalanche of spending that has been announced by TSMC, Samsung, Intel and others in the chip industry. This is in addition to the $150B earmarked by the Chinese government to be the leaders in chips.

$50B spent by the US government will hardly move the needle as it will likely take a while to figure out who will get the money and then actually get it from the government. While $50B is nothing to sneeze at, it could get lost in all the other spending plans.

Its going to be very interesting indeed to see if we can build buildings fast enough to house all the tools or build EUV tools fast enough to keep up with spending plans.

There is also the prospect of supply and demand coming into balance sooner rather than later and all these huge spending plans will come down like a house of cards and we could easily see a standard cyclical downturn.
Its a giant crap shoot.

Don’t laugh but Elon Musk mused about buying a chip factory. If the government were truly smart they should partner with him to rebuild the chip industry in the US.

Why not? He has single handedly re-invigorated the auto industry (on an international basis) and completely restarted the US space industry that had failed.

Perhaps his “First Principles” thinking of getting down to the fundamental physical level problem solving would benefit Moore’s Law.

Elon may or may not be available to fix the chip industry but what we clearly need is outside the box thinking and a fresh approach because the way the industry has been run over the past couple of decades has led to the loss of US dominance which has very huge and far reaching effects outside of the industry and many times its size. The current chip shortage is nothing compared to what could happen if we don’t respond correctly.

We maintain our bias on semiconductor equipment makers such as ASML, AMAT, LRCX and KLAC as the arms merchants in an escalating war.

Its unclear who the chip beneficiaries of US spend will be but its clear that at the end of the day the money will wind up at many of the equipment makers.
Intel is very much still a work in progress that has bitten off quite a lot to chew. We like the change to Pat Gelsinger but there are so many challenges that it seems very daunting.

Micron seems to be quietly making money in a nice memory environment.
TI is another quiet company outside of the limelight that continues to make money in semis. Tower Semiconductor in Israel obviously had a crystal ball years ago about the need for non leading edge chip capacity and picked up a pile of fabs on the cheap which puts it in a great spot right now.

We think overall there are still some overlooked companies in the space and enough time left in the current cycle to make some money without having to pay nosebleed valuations.

You know you have a problem when 60 Minutes covers it!