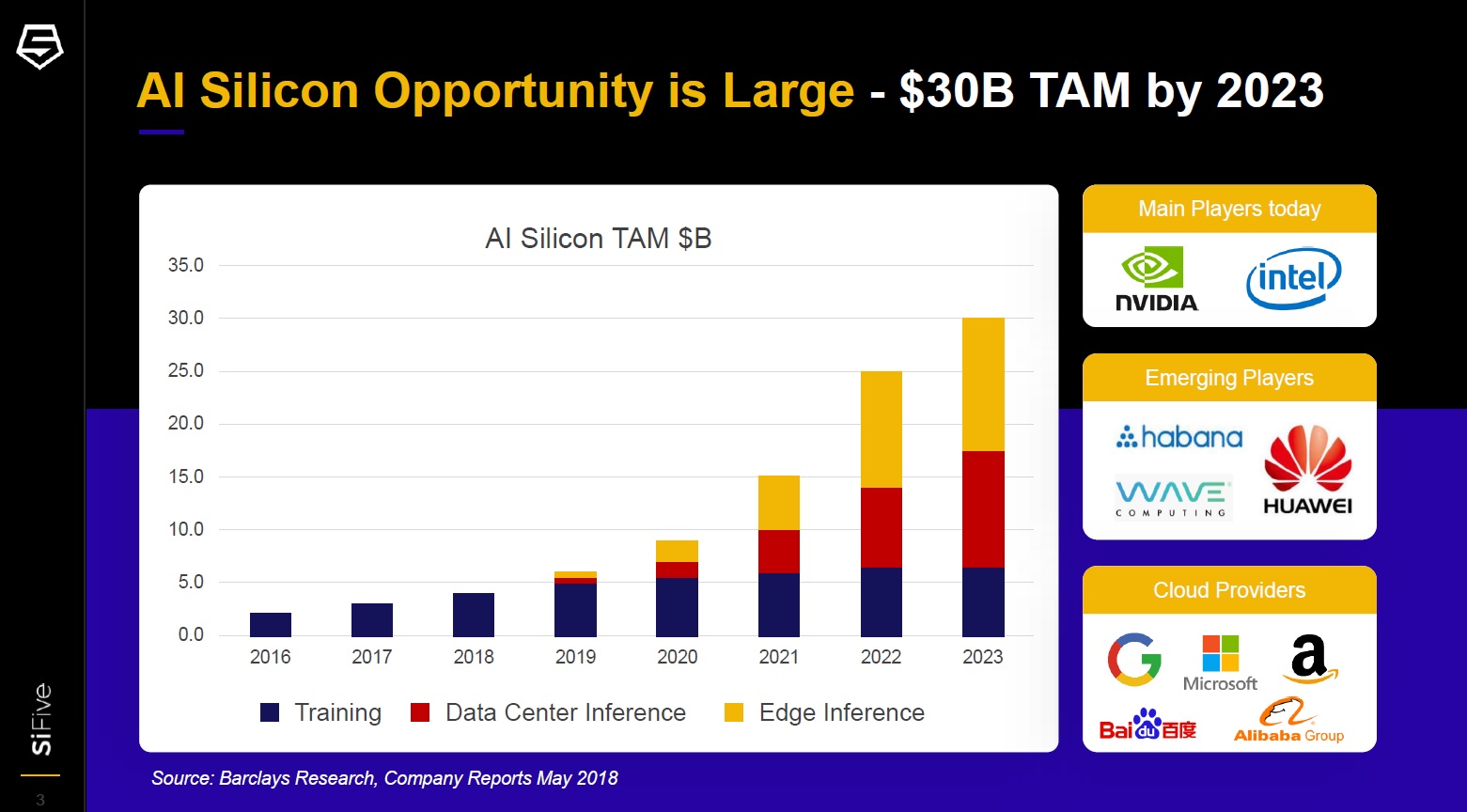 Naveed Sherwani, President and CEO of SiFive, did the keynote for this year’s Silicon Summit. This is one of the premier events for the C level executives in Silicon Valley, absolutely. Naveed is one of the top visionaries for the semiconductor industry and he certainly did not disappoint this time or any other time in my experience.

Naveed started off comparing the semiconductor industry to the software industry. For example, their growth is 10x in 1 year while ours is 10x growth in 10 years. This is very relevant now that AI is driving the semiconductor industry because AI is software centric, right? The SemiWiki bloggers and I have been doing serious amounts of coverage on Artificial Intelligence. AI now drives the largest share of traffic on SemiWiki.com as it touches ALL of the market segments that we closely watch: IoT, Automotive, 5G, and Security.

Naveed did a nice AI overview and I now have the slides so here is a brief summary:

Fast Tracking Silicon and Systems Design for the Edge

The interesting thing here is that AI chips are domain specific so there will be no single provider like Intel used to be for CPUs and Nvidia for GPUs. The result being that systems companies will ultimately rule this domain ( as they now do with SoCs) with custom silicon when the AI market matures, my opinion.

This all started on the edge devices with mobile companies putting AI cores inside SoCs. These Neural Engines were used for facial recognition and other machine learning and inferencing tasks. Cloud companies are also making domain specific AI chips. Google announced Tensor in 2016 at the Google IO Conference. In 2018 Google announced the third generation TPU plus an edge TPU for cloud inferences. Other cloud companies have followed suit making custom silicon for their data centers.

The worldwide public cloud business is expected to grow more than 17% in 2019 to a record $200B+. In 2022 it should exceed $300B so spending a couple of hundred million on making your own chips to differentiate your cloud services is an easy thing to justify, right?

The result is a major semiconductor disruption, not unlike the fabless transformation we experienced in the late 1980s and early 1990s. Systems companies design chips differently than traditional fabless companies. They are not bound by chip margins since they do not sell the chips so budgets are much more flexible. Semiconductor ecosystem companies such as foundries, EDA and commercial IP companies have done quite well as a result. FPGA prototyping companies specifically have done very well since the systems companies have a significant software burden that can be addressed more quickly through prototyping and emulation. AI models are also fast moving so you definitely want to prototype.

Speaking to that, one of the slides Naveed used repeated the notion that 7nm chip development is too costly at more than $500M. This number has been floating around the ecosystem for some time and I have found it to be patently FALSE. Even if you include embedded software development it is not even close to $500M. eSilicon has already taped out some very large chips at 7nm for a fraction of that price. I have discussed 7nm design costs with some of the top fabless semiconductor companies in California and every single one of them laughed or smirked at the $500M 7nm chip price. And now I’m reading that 5nm chips will cost $600M?

SEMICON West is coming up so I will continue my inquiry into this FUD but you have to ask yourself “self, who is it exactly that benefits from this kind of 7nm smear campaign?” The answer of course is the analysts who are trying to sell their reports. Unfortunately, they are cutting off our noses to spite our faces since investment in fabless companies is at risk with such inflated propaganda, but I digress…

Naveed also mentions China which is appropriate since you cannot have a semiconductor discussion these days without talking about China. Naveed points out that China is leading the world AI funding with 48% compared to the US at 38% and this will continue in my opinion. Even so, I would say that in total, US funding will result in many more production chips than China since China is still relatively new at the fabless business while the US has 30+ years of experience.

According to Naveed the big difference between software and semiconductor design is development costs (true), development cycle (true), and too many experts needed (very true). 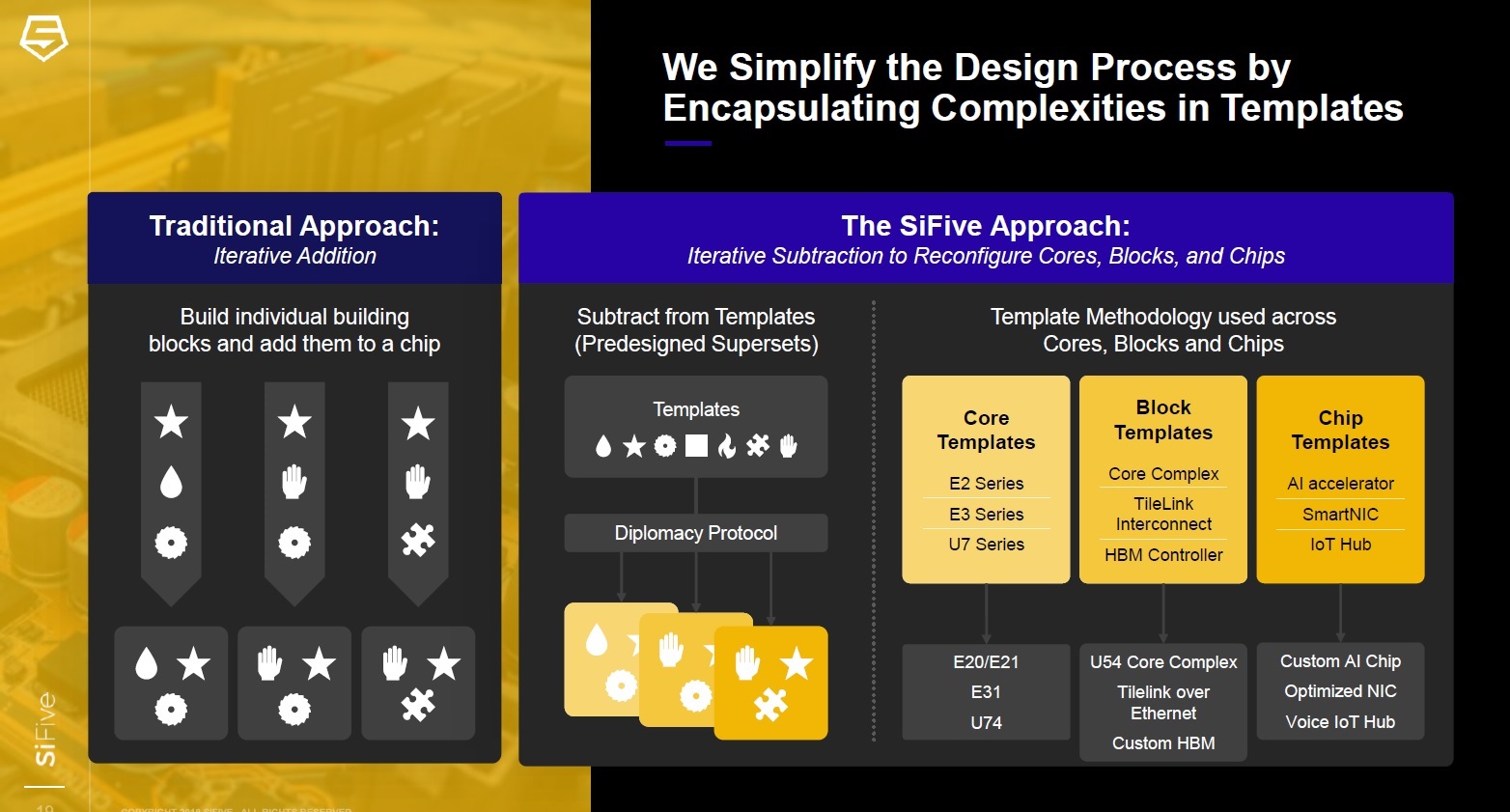 SILICON AT THE SPEED OF SOFTWARE

Design RISC‑V CPUs in an hour. Get custom SoCs in weeks, not months. Impossible? Not anymore. Discover a fundamentally new approach to creating custom SoCs.

Bottom line: SiFive is all about removing the barriers to getting emerging fabless chip companies and new-to-chip-design systems companies into silicon. Design starts and finishes are the lifeblood of the semiconductor industry so I say BRAVO!