More Than Your Average IP Development Kit
by Bernard Murphy on 02-13-2018 at 7:00 am
View Profile
View Forum Posts

When I think of an IP development kit, I imagine software plus a hardware model I can run on a prototyper or, closer to the kits offered by semi companies, software plus a board hosting an FPGA implementation of the IP along with DDR memory, flash and a variety of interfaces. These approaches work well for IP providers because hardware investment in both cases is relatively modest. 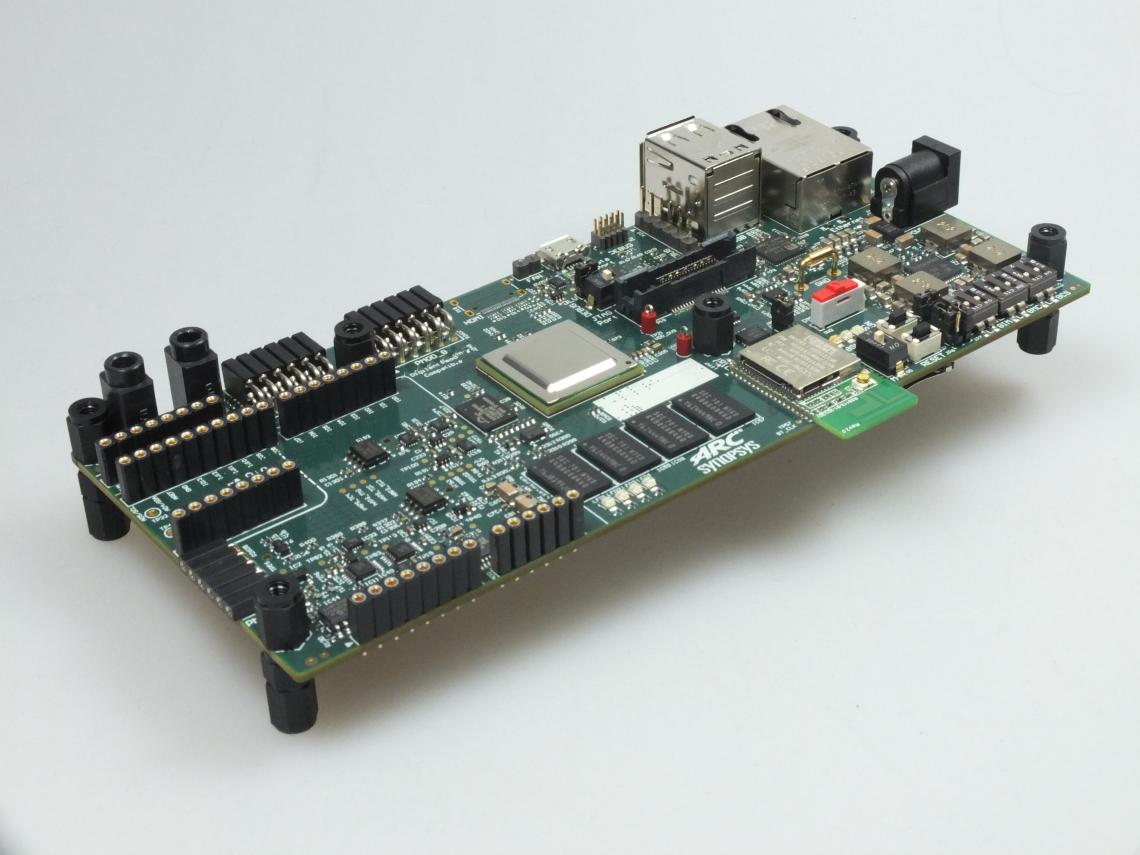 But neither of these solutions fits well for a kit supporting a high-speed IP. How do you effectively develop and test systems and software at GHz real-time speeds with a prototyping model running (best case) at 10’s of MHz or an FPGA implementation perhaps running (again best case) at 100MHz? The answer of course is that the implementation has to be an SoC.

This is exactly what Synopsys has built for their ARC HS development kit, which indeed will run at 1GHz. Of course the IC holds more than an ARC core. This is a full-featured SoC supporting up to quad-core HS3x configurations along with a Vivante GPU, and interfaces for DDR, SPI, I2C, WiFi/BT, Ethernet, USB, a variety of analog interfaces and more. The board itself hosts 4GB of DDR memory, 2MB of flash, EEPROM and SD card slot, WiFi/BT module and a variety of other slots, altogether making this a true high-performance and low-power single board computer.

Which is important because for a lot of the applications to which you might target ARC HS, you want to be able to run Linux, also supported in the kit, so you can be up and running out of the box. That said, the kit supports a wide range of open source software from bare metal drivers and RTOSes to complete Linux distributions, which can be built with Buildroot and Yocto. The embARC Open Software Platform (OSP) supports the ARC HS Development Kit and includes drivers, FreeRTOS and middleware targeted at IoT and general embedded applications. Toolchain support is provided by the GNU Toolchain for ARC Processors and the MetaWare Development Toolkit (a commercial offering from Synopsys). All the open source software is available from the embARC.org web site.

Allen Watson, product marketing manager for software development tools for ARC, told me the kit is very extensible, providing headers for Arduino, Digilent Pmod and mikroBUS modules, also for fast AXI tunneling to Synopsys’ HAPS prototyper. Allen told me it is also very easy to connect sensors to the kit. All of which should enable you to quickly assemble a system in support of software development and product prototyping, while your hardware design team gets on with the more detailed SoC architecture.

Where is a solution like this going to help development? Allen mentioned WiFi routers, IoT gateways, higher-end storage (such as SSDs), baseband control, digital TV and home appliances, all areas where high performance demands are common but with an expectation of low power, the sweet spot for ARC HS.

There is also a lot of activity in this area around automotive support. I can’t find a customer reference, but Synopsys cite the value in power, performance and area of ARC HS processors for automotive applications and their MetaWare tool-chain is ASIL-D certified, a level I can’t believe Synopsys would have gone to if they weren’t working with someone (several someones if they’re following their usual path). And there’s this piece suggesting the ARC HS is particularly targeted for use in initiating and scheduling control of BIST in safety-critical systems.

I find a couple of things especially interesting about this announcement. First, Synopsys is providing a development kit on a level with those provided by semiconductor enterprises (and ARM), based on an SoC rather than an FPGA. I don’t think this is their first (I think they have a similar solution for IoT support), but it’s quite interesting that they now feel comfortable shipping Synopsys-designed SoCs in products. No threat to their customers of course – these are very narrow purpose-built devices. Still, this is a logical outcome to having all the tooling, most of the IP, foundry relationships and a lot of in-house design expertise.

The second point I find interesting is their accommodation for makers, particularly through Arduino and mikroBUS support, as well as more traditional big semi flows. Allen told me that this is quite deliberate. He sees an opportunity with those in the maker community who need high-performance, low-power computing as a part of their solution. This could be an interesting new market for Synopsys.

You can learn more about the ARC HS development kit HERE.