Only one company at the recent DAC conference and exhibit had a set of four interacting disciplines: Fluids, Structures, Electronics and Systems. Did you guess that the company was ANSYS? I get so IC focused at times that I almost forget that chips plug into boards, that boards become systems, and that systems drive and control mechanical devices where fluid airflow is a design challenge. One presentation made by ANSYS at #52DAC was titled, “Driving Low-power Design with Physical-aware RTL Power Budgeting Methodology“, and it caught my attention because of the EDA focus. ANSYS acquired Apache back in 2011, so during the past four years their electronics software has continued to meet familiar challenges like:

The big idea behind managing power during the design phase is to focus on tools for RTL designers, where they can change their code even before logic synthesis and physical implementation in order to achieve the greatest power reduction. With this mindset you then want a design for power environment where it’s possible to:

With the ANSYS approach there are six steps that lead to a design that is optimized for low-power:

Related – A Key Partner in the Semiconductor Ecosystem

Perform Design Trade-offs at RTL
It’s easiest at the RTL level to look at implementing hardware in various approaches like creating an IFFT as pipelined, combinational or folded architecture. While at RTL you can quickly estimate power dissipation for each approach and choose the one that meets your power, performance and area goals. 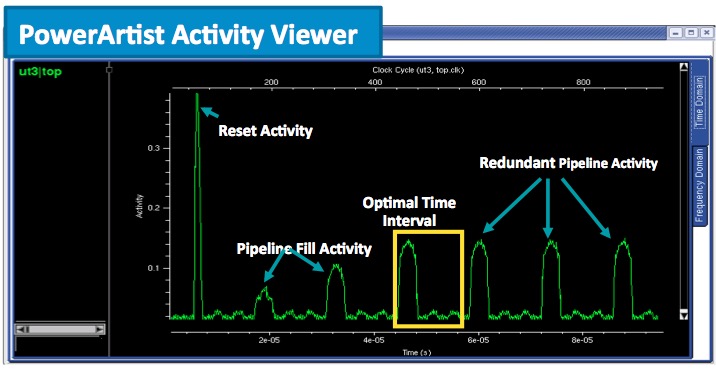 Check Power versus Budget, Early
During RTL coding you should be looking at power in all of its forms: Average, Peak, Waveforms. This kind of early feedback enables an engineer to decide on a package type, decoupling capacitors, and grid design. Understanding the early power numbers across the hierarchy, by category (function, static or dynamic), by power mode will help identify all contributions to total power dissipation.

Identify and Debug Power Hotspots
There are a couple of approaches to debugging power hotspots: Graphic or Tcl-based. With the graphical approach you can spot anomalies in power by browsing for absolute power values, relative power values, cross-probing RTL to schematics, or using power metrics.

With the Tcl language a designer can get quick access to both power and design properties. Power metrics can be listed on each block of your design hierarchy, or by clock domains, or even down to the flop and latch levels.

Reduce Power Early at RTL
Two power reduction techniques that restructure your RTL are block-level clock gating and block-level data gating. There are even some built-in automation with PowerArtist that identify logic for clock gating, memory subsytem optimization, and reports on eliminating redundant activity.

Related – Will your next SoC fail because of power noise integrity in IP blocks?

Summary
The proof in any EDA methodology for electronics design is customer adoption, and at the DAC show there were plenty of ANSYS customers at hand, such as: Avago, Cavium, ClariPhy, Emulex, Freescale, Infineon, Intel, Mediatek, Microsoft, Qualcomm, Samsung and Tesla.