How do you learn new hardware design topics? I just got trained online about property-based verification for hardware designers using a free online class at Aldec. The material was created by Jerry Kaczynski, a Research Engineer at Aldec.

Assertions
An assertion is an abstract representation of device behavior, useful in design specification, verification and implementation.

You can place assertions directly into RTL code, hidden in special comments like:

Most logic synthesis tools ignore assertions for now, although some libraries of property checkers allow synthesis.

Properties
Formal properties use the concept of temporal logic, which is boolean logic along with time. These time relationships use operators like:

As an example if we wanted to describe, “activation of REQ must be followed by activation of ACK”, it looks like: 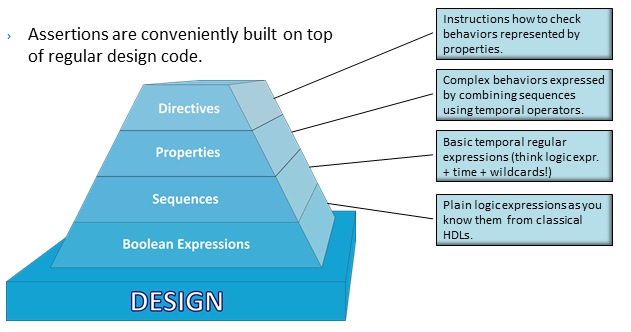 Temporal Logic
Temporal logic extends the familiar concept of boolean logic to include time (i.e. next, finally, globally, until, release, all, exists).

Properties are used in verification for:

A verification tool would use properties to: 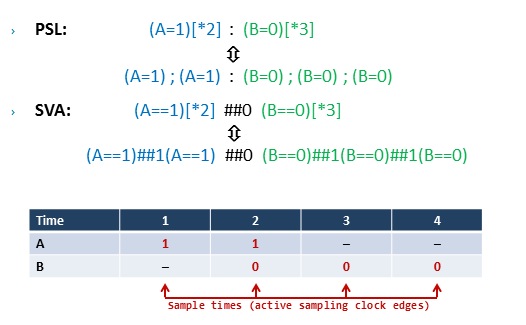 Creating Asserts and Covers
The concept of Implication is introduced, then applied to the design property, “ACK should be activated 1 to 3 cycles after REQ, provided that RESET is not active”:

An improvement is made to the assertion to take into account the edge of RESET:

Asserts raise alarm when the asserted property fails, while Covers can print or increment when the behavior was detected.

Verification Directives
Assert, Assume and Cover are reviewed, then Action Blocks are shown with usage tips: 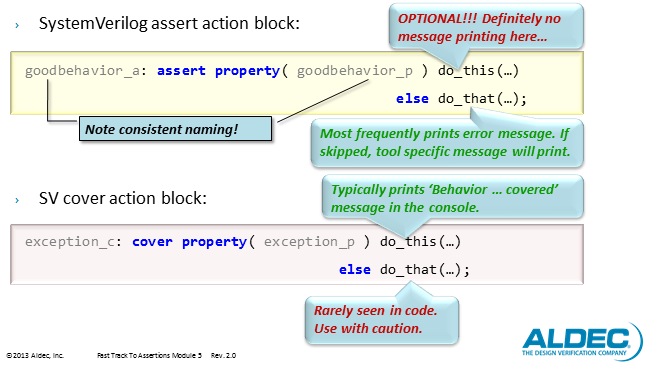 Some of the verification directives are simulator specific, so you have a learning curve with each new simulator. The Aldec simulators use a color-coded waveform viewer to show results of Assertions:

Summary
You can learn to use Properties, Assertion and Coverage to improve the design, verification and implementation of your next SoC project. Free, online training is a good starting point which can then be followed up with instructor-led classes, and book reading.