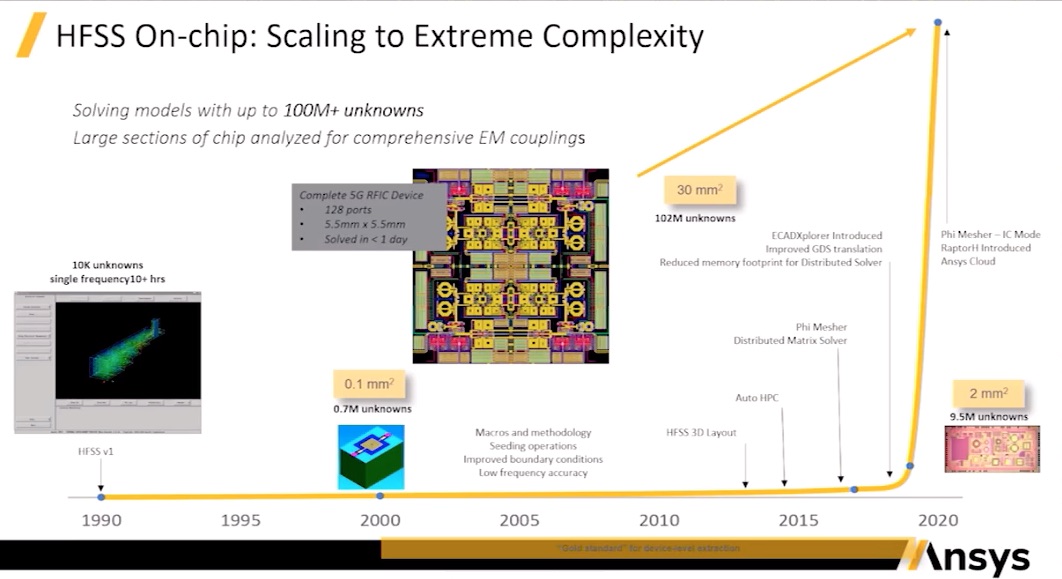 Ansys HFSS™ has long enjoyed industry respect as a highly accurate electromagnetic simulator suitable for general purpose applications. Ansys has worked over the years to maintain its gold reference accuracy, and also to dramatically improve its performance and ease of use. A very interesting review of the key technology breakthroughs over the years is covered in an on-demand presentation by Jim Delap, Director of Product Management at Ansys. The presentation, part of the Ansys IDEAS Digital Forum event, titled “Breakthroughs in Electromagnetic Simulation” covers HFSS from the very early days in the 1990’s up to the present. In the last decade in particular there have been major strides in addressing designs that would have been unthinkable just a few years ago.

To set the stage Jim begins by reviewing the performance and capacity of HFSS when it was released in 1990 as the world’s first commercial electromagnetic simulation product. At the time they illustrated its use on a coax-waveguide transition that needed a ~10k element matrix to solve. A single frequency run required 16 hours. Today this same design can be run in about 20 seconds on a laptop!

At the heart of HFSS’s reliability and accuracy is the automatic adaptive meshing, which increases the efficiency of the simulations by only placing mesh elements where they are needed. Once design setup is completed by defining geometry, materials, boundaries, excitations and solve setup, HFSS automatically goes through the solution process which includes: initial mesh, adaptive refinements, frequency sweep and final post processing steps.

Analyzing production tool usage, Ansys found the matrix solver is where most of the time is spent. So according to Jim this is where they have focused much of their development effort. Initially they implemented Matrix Multiprocessing to take advantage of multiprocessor machines. Now they have advanced versions of this that use techniques that work on sparse matrices. In real world cases they can achieve a 5X improvement in runtime with 10 cores. Not content to limit users to the processors on a single machine, Ansys has also developed a Distributed Memory Matrix solver that allows runs to access more memory and more cores. Jim talks about an example where they model a car trunk antenna with a simulation volume that includes the entire vehicle and surrounding area. The matrix size was 12M elements, using 715GB of memory and 6 machines. The runtime in 2016 was 3 hours. The runtime would be significantly reduced today. Currently they can solve models with over 100M unknowns, which means that full RFIC chips can be fully modeled for EM coupling in under a day.

To improve the runtime of frequency sweeps, HFSS introduced Spectral Decomposition Method (SDM) that solves frequency points in parallel for a 1.7X speed-up on the same hardware. Using additional high-performance compute clusters dramatically improved runtime by over 5X so that runs that used to require over a day can be done in a matter of hours. Then the next step was the introduction of S-Parameter Only Matrix Solve which further improved frequency sweep runtime by significantly reducing memory consumption. The on-demand presentation video goes into the specific benefits from these improvements.

More recently Ansys has focused on advances in meshing to independently mesh separate regions of the design using different algorithms. For instance, objects have widely different scales, i.e. chips, boards, connectors, antennas, are each meshed separately and in parallel. The separately meshed objects are then combined into a single solution volume. These enhancements allow for solving a wide range of systems from chips, boards, full products, all the way up to test chambers in a single simulation.

Ansys also has a new Phi Plus mesher that can handle bond wires, packages and ECAD/MCAD assemblies. Jim says that it is the first real conformal mesher. Using 12 cores it offers a 10.7X speed up. It is ideally suited for bond wires and other irregular structures. The improved meshes it creates enable much faster convergence resulting in faster sweep times. In some of their test cases Jim says the new Phi Plus mesher is nearly 18X faster than the classic mesher.

The combination of Mesh Fusion and Phi Plus Mesher is, according to Jim: “The one-two punch for meshing. We are now meshing and solving problems that we never thought were meshable”.

The final part of the presentation moves away from speed and focusses instead on technologies that are aimed at increasing the size of problems that HFSS can take on. Jim talks about HFSS’s Domain Decomposition method (DDM) that works as a distributed memory solver that can parse out subdomains to distributed processors. Jim emphasizes that it is a true solver not simply separate S-Parameter generation with stitching of results. The mesh domains are automatically generated, making the entire process much easier for users.

Jim also touches on several topics at the end of his talk including improvements for finite antenna arrays and faster broadband adaptive meshing. He also discusses the running of HFSS on Ansys Cloud hosted on Miscrosoft Azure and supported through the Ansys Engineering Desktop (AEDT). It has been quite an evolution from running a single coax-waveguide transition to the ability to model a full chip, on a board, in a finished product (such as a car) including the measurement chamber. The presentation goes into sufficient detail to make a convincing case that Ansys has and will continue to innovate HFSS to meet the most complex electromagnetic simulation challenges. While the market offerings for EM solvers has increased and the number of companies offering them has grown, it is clear that HFSS still stands in a class of its own. The full presentation can be viewed on demand as part of the Ansys IDEAS Digital Forum at www.ansys.com/ideas.